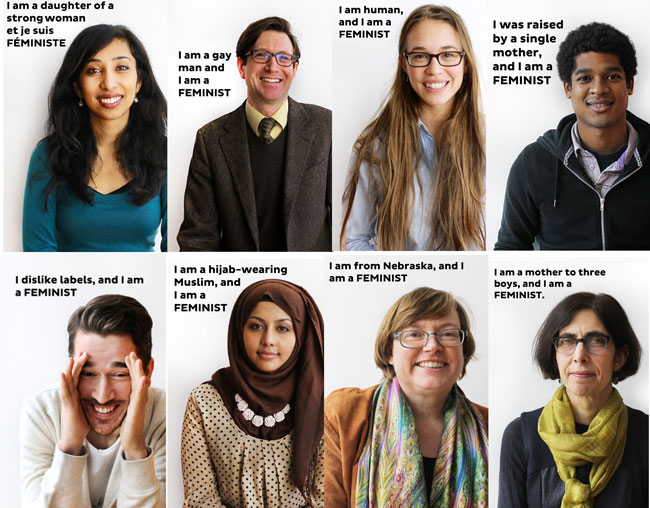 #LawNeedsFeminismBecause National Forum will explore how to reshape the legal profession

[Editor’s Note: The #LawNeedsFeminismBecause\#LeDroitABesoinDuFeminismeCar (#LNFB) National Forum on March 11, three days after International Women’s Day on March 8, will encourage discussion and collaboration among students and legal professionals on feminism. The Forum will look at four themes to gain a better understanding of how to reshape the legal profession: Feminist legal mentorship; student experience; alternative legal careers; and legal recruitment. The Forum will be held at McGill, and profits will be used to publish a book combining #LNFB portraits and stories.]

These days, some people are reticent to call themselves feminists publicly.

Even if gender equality has become a universal principle for the vast majority of Canadians and enormous progress has been made toward the recognition of the rights of LGBTQ people there are strongholds that still resist the push toward equality.

That is where the impetus for LawNeedsFeminismBecause comes from.

In 2014, the Feminist Collective of McGill Law held its first photo campaign focusing on why people self-identify as feminist. On Jan. 23 and 24 this year, the Collective held its third annual photo campaign, shifting its focus on the legal perspective of feminism, rather than on the feminist movement in general. The event saw 100 students participate – a significant increase from the 33 that took part in April 2016.

By getting people to complete the sentence “Law needs feminism because” and have a photo taken with their completed phrase organizer and third-year law student Rachel Kohut was hoping to encourage participants to define the terms ‘law’ and ‘feminism’ using their unique perspectives. The hope is that the photos can act as a medium to advocate for more diversity and inclusivity within the legal profession.

The campaign has gained traction and publicity across Canada. This year, law faculties at 13 other universities joined the #LNFB social media campaign, including the University of Toronto and the University of British Columbia. Seneca College is also joining the effort, organizing a photo event for paralegals, law clerks and legal assistants. Furthermore, #LNFB has also expanded to health care, with the McMaster School of Medicine planning to launch the #healthcareneedsfeminismbecause movement in May 2017.

Kohut says she’s both surprised and proud of how far the movement has come over the last few years. “The next step is really about honing what’s already been done by feminist lawyers before us and to continue building a strong sense of community,” she said.

“The legal profession continues to struggle integrating feminism into practice. In your first years of law school, you’re often reading early 20th century texts written by men, and although efforts have started to be made to change this, it can still be demotivating at times,” continued Kohut. “Add on conversations about how you ‘should’ dress or what you should and should not disclose during interviews, and when you should ‘ideally’ have a kid if you want to make partner – it is no wonder that many women leave law firms after only a few years of practice.”

McGill Law remains the anchor of the growing #LNFB project by orchestrating photo campaigns with other law faculties across the country, organizing the national forum on March 11, and providing institutional support for a movement that is now growing into an organization.

Kohut attributes the success of the campaign to its artistic elements, accessibility, and timing.

“I definitely didn’t expect the campaign to go this viral, my Facebook inbox exploded with all the messages I was getting,” Kohut said. “People are ready to talk about feminism in law and #LNFB provided the means.”

Kohut said that there are days that can be overwhelming, but that her favourite part of the campaign is hearing people talking about their struggles in law school and visions for the legal profession.

“It is easy to get caught in the law school bubble,” Kohut said. “It’s nice to break that bubble and see people coming together from different law schools. People are organizing and it’s very empowering, you know that you’re not alone. The next step is really about honing what’s already been done by feminist lawyers before us and to continue building a strong sense of community,” Kohut said.

This year’s photo campaign explores feminism at McGill Law school by looking at why law needs feminism. According to the project website, “over 30 participants finished the sentence ‘law needs feminism because / le droit a besoin du feminisme car’ and lined up one by one for their portrait to be taken by professional photographer, Whitney Lewis-Smith.”

That led to being interviewed by CBC, and a series of meetings and conference calls with other feminist law student groups and women and the law organizations. Other law schools did photo shoots, and #LNFB spread.

Kohut told the CBC studying law was the first time she felt gender played a factor in her life, and it was discouraging. In one weekly meeting where students mingle with established lawyers, Kohut got a bit of a shock. “An older man from one of the firms thought I was cocktail staff and tried to order a drink from me. Why did he make that assumption?”

Kohut looked for prominent female lawyers in alternative legal careers in Montreal who could give advice to her and some of the other students, but she couldn’t find many. She and the other members of the Law Needs Feminism group decided to bring people together in a structured conversation about the problems and solutions.

“A lot of women don’t make partner in firms. That sort of thing gets talked about a lot in the [McGill Law] department,” said Kohut. Faced with looming issues such as how having children might slow career progress and without many role models in the industry, she said many female law students are already looking at alternative careers in which a law degree is an asset. Kohut says many young women lawyers ask themselves, ‘when should I have kids?’ “The higher you go, the more you need to nurse your professional relationships. So there’s never a good time to start a family,” she says.

Get more information about the March 11 #LawNeedsFeminismBecause National Forum.

Donate to the crowdfunding page dedicated to #LawNeedsFeminismBecause on McGill Seeds of Change to support this endeavor.

Government of Canada promotes equity and invests in discovery...