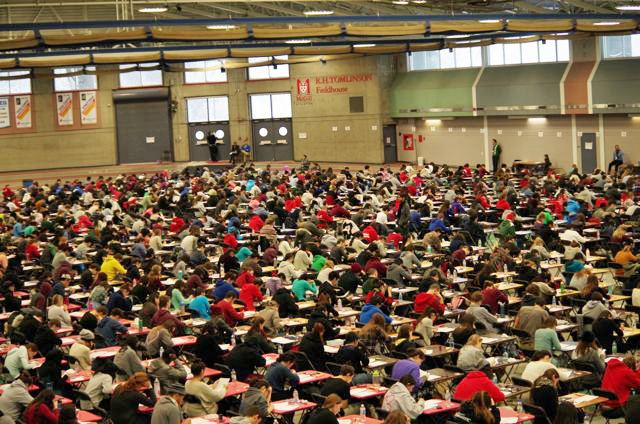 It’s 4 a.m. and Kathleen Massey, McGill’s Registrar and Executive Director of Enrolment Services, is already checking the Environment Canada weather website. She’s not a crazy person; it’s part of her demanding job in overseeing a team that makes sure 600 final exams are administered to thousands and thousands of McGill students.

Massey will be back on that website no less than 10 times a day until finals are finished. It’s one of the joys of managing exams in winter weather.

Massey and her team need to confer by 5 a.m. to determine if weather will compel them to postpone by an hour the start of the 9 a.m. morning exams. By 5:45, the Chief Invigilator, Stanley Whyte, will provide the recommendation to Deputy Provost (Student Life and Learning) Ollivier Dyens, who will have to make the call.

In the seven years Massey has been at McGill, she can’t recall weather forcing an exam to be cancelled.

“We certainly have delayed the start of exams,” she said during a rare quiet moment this week. “We had to move exams because of an election once, and shifted them to Sunday.

“There are circumstances that occur, but we’re well prepared; the team, headed by Assistant Registrar Heidi Emami and including Stanley Whyte, Elvie Chiappetta, and Danuta Klis, has a good protocol in place for emergency situations, like a flood or a fainting student.

“There are always issues that arise during the exam period. This stellar team is very committed to ensuring that exams run well for students and instructors and do everything they can to minimize any disruptions.”

And the best place for students to get information on any delays or location changes is http://www.mcgill.ca/students/exams/.

Massey, who earlier this year was presented in Quebec City with the Outstanding Achievement Award by the Association of Registrars of the Universities and Colleges of Canada (ARUCC), said the University continues to streamline the examination process and improve ways to help students cope with the inevitable stress.

As in real estate, it can be all about location, location, location. McGill’s exams used to be delivered in a wide variety of classrooms, but this year most exams are being administered in the vast spaces of the Currie Gym and the Tomlinson Fieldhouse at the Athletics Complex on Pine Ave. About 2,200 students write exams at any one session.

“Thanks to the tremendous collaboration with Athletics, it’s much more straightforward to manage a single location,” Massey said. “Its one of our ways of trying to reduce the stress on students, invigilators and instructors.”

Other changes include bringing technology to the exam site, so students who have lost or forgotten their ID card can log into Minerva to prove their identity before taking an exam, rather than having to go back to Service Point to get a new card.

McGill, like other universities, has become better at recognizing student stress and dealing with it, Massey said. “There are better mechanisms in place to support the students,” including guided meditation, yoga programs and therapy dogs available on a daily basis. “Everybody is more aware and attuned to dealing with it,” she said.

The changing nature of post-secondary education has added more mid-year stress than was the case a few decades ago. Most courses, Massey said, are now half-courses – they finish at the end of the term instead of continuing into the new year. This means finals instead of mid-terms before the holiday break for most courses. And when you’re sitting a final exam in early December, it seems like you just finished that mid-term in October.

It’s particularly tough on first-year students. But the switch to predominantly half-courses over the past two decades is not unique to McGill, Massey said. It’s now the norm.

Compared with Massey, Assistant Registrar (Records and Exams) Heidi Emami gets to sleep in – until about 4:45, having got to bed at about 11:30 the night before. Is she sleep-deprived by the end of the exam period?

“Absolutely. The whole exam team – they’re working so hard, everybody’s putting in a lot of long hours. Hopefully by around Friday (at the end of the first week) things will be more on auto pilot and after that not so many people have to put in the 12- and 14-hour days. You get back on track.

“I wouldn’t say that I dread it, but it is a very big operation, so we start planning four or four-and-a-half months ahead of time. It’s a machine. You adjust accordingly when things happen, like weather delays or other urgent situations.”

“We couldn’t do it without the collaboration of everyone, from professors to departmental coordinators, our Exam Deputies and many invigilators, Printing Services, Special Events, Athletics, Associate Deans, Security Services,” Emami said. “It’s a huge logistical challenge that takes place twice a year.”

And there are human moments that make the job interesting. Emami noted that students are told to leave valuables at home but are encouraged to bring snacks for sustenance during the three-hour sit.

Last April, Emami said, one student took that a little too far and showed up with tea, a teacup, a kettle, a pot and an extension cord. Uh, no.

Massey, who worked at York University and the University of Calgary before coming to McGill, said she was very honoured to have been chosen by her peers for the Outstanding Achievement Award, which recognizes “a member’s significant contributions to the registrarial profession, to the work of a regional or the national association, to their own institution, and/or to the improvement of service to students.”

Emami was not surprised to see her boss presented with the coveted certificate.

“Kathleen is one of the best leaders, registrars, bosses I’ve ever had. She’s truly an outstanding example. She’s been an incredible mentor to me. And it has been a great opportunity to work with her over the last seven years. She’s so supportive, always available.

“We’re very lucky to have her. She cares about her staff and she cares deeply about the students.”