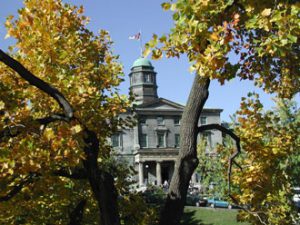 If it’s beginning to sound a bit like a broken record, at least it’s a song McGillians won’t get tired of hearing.

For the sixth year in a row, Maclean’s magazine has ranked McGill first in its class in its annual issue devoted to Canadian universities and published this week. McGill placed first in the medical-doctoral category, which includes 15 Canadian universities with medical schools and a broad range of PhD programs.

“We are pleased to be recognized in this way,” said Principal and Vice-Chancellor Heather Munroe-Blum. “This is one acknowledgement of the vision, dedication and accomplishments of our outstanding faculty, students and staff. For nearly 200 years, McGill has strived to deliver a top-notch education, conduct cutting-edge research and make meaningful contributions to the broader communities within Quebec, Canada and globally.”

McGill’s focus on quality, impact, and interdisciplinary collaboration has served to meet the goals of building an environment of unparalleled commitment to teaching, research and scholarship, and service to the community, Munroe-Blum said. The university was also ranked among the top 20 universities by the 2010 QS World University rankings earlier this year, and placed 35th in the THE-Thomson, underscoring a consistent reputation as one of the leading institutions of higher learning in the world.

“Of most importance, however,” Munroe-Blum noted, “is that as a society we need to make education our first priority. This isn’t just about McGill; it’s about ensuring that Canada is competitive in our globalized world. The assets of a highly educated citizenry and of highly performing universities are key to a healthy society.

“The draw of jurisdictions outside of Canada for students, for professors and for research dollars grows tougher every year,” she continued. “Rankings throw a spotlight on universities and education, allowing us to pause and highlight the importance of post-secondary education for our young people and our communities. Governments, the private sector, families and community leaders need to ensure that high quality, accessible education at all levels is our national objective.”

The Maclean’s rankings and surveys measure a number of aspects of a university’s operation. McGill was a leader in a number of areas, including:

• First in student awards for the 12th consecutive year

• First in scholarships and bursaries as a percentage of budget