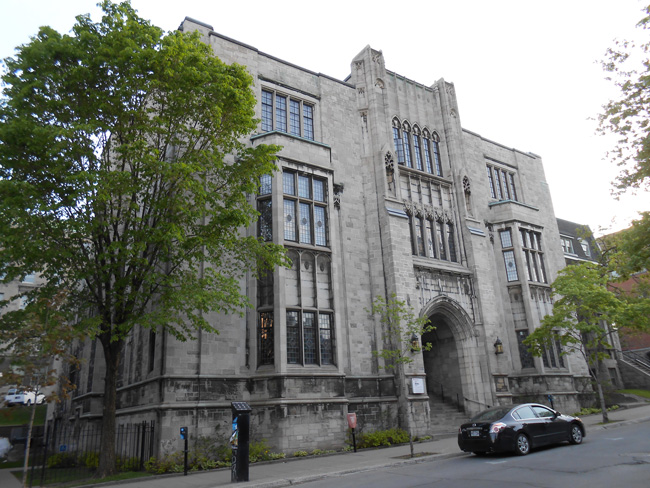 McGill’s Faculty of Religious Studies has been a resourceful and adaptive intellectual community dedicated to advancing the critical study of religion and its impact on society, politics and culture. From its inception, it has continually re-assessed and renewed its mission and resources. The new transition of Religious Studies from its Faculty status to a School – made official at the Thursday, Feb. 11, meeting of the Board of Governors – represents another pivotal moment in this evolution.

McGill’s Faculty of Religious Studies was one of the first places in North America where the world’s religions were studied rigorously in a university setting, along with professional training for students engaged with the religious sector. This nexus laid the foundations for an internationally recognized tradition of academic excellence in religious studies shaped by ongoing interaction with the living perspectives and practices of religious communities.

From the early 20th century, William Birks spearheaded a determined effort to draw theological colleges and McGill into ecumenical and interfaith consortium for the study of religion. In 1948, the Faculty of Divinity was formed with six chairs ranging from biblical studies to comparative religion. In 1969, the unit was renamed the Faculty of Religious Studies to reflect the increasingly pluralistic religious world that was the focus of its study.

The goal of this latest reconfiguration is not to downgrade the discipline. In fact, the explicit objective of the agreement for transitioning the Faculty into a School is to situate Religious Studies more constructively within the academy and to strengthen its capacity for future development.

In some ways, this academic shift is a response to cultural and political changes. At the turn of the 21st century, we find ourselves in a world marked by the resurgence of religion. Gone are the happy secularist days when political leaders from Kennedy to Khrushchev, Nasser, Nehru or Ben Gurion could confidently relegate religion to a separate devotional sphere, largely disconnected from broader social and political developments.

One face of this resurgence is the evolving struggle to accommodate the rich diversities of religious belief and expression within increasingly multicultural societies. However, the resurgence of religion is also marked by a dark side with the rise of violent ideological extremisms anchored in religion.

Engaging religious diversities and the dilemmas generated by the rise of politicized forms of religious extremism present new and complex challenges for the academy. The School of Religious Studies brings its established credentials in diverse fields such as biblical studies, Hinduism, Buddhism, philosophy of religion, public theology, religion and globalization, and public policy. These assets come alongside the work of Islamic Studies, Jewish Studies, as well the array of scholars engaging religion in disciplinary fields such as Law, International Development Studies, Anthropology, East Asian Studies, Philosophy and Education, among others. With this range of assets McGill is uniquely placed to critically engage the challenges posed by the changing face of religious identities and movements in global societies.

The academy often tends to overlook the institutional capacity, social capital and political salience of the religious sector. However, an expanding body of research is highlighting the impact of religion on culture, the arts, democratization, human rights and global politics. As a School, we are well situated to creatively expand our work and interaction with the complex and changing face of the religious sector. The School will continue to build discursive sites where the academy and wider religious cultures interact and negotiate the complexities of religious identities and communities within the public sphere.

Dan Cere is Interim Dean of the Faculty of Religious Studies

This hardly seems like an advance. Swallowing up the Faculty into another Faculty does not seem “exciting.” It seems like a downgrade.
It seems like a movement from a religion faculty primarily concerned with the education of clergy to a secular school of religion.
Not a fan of this at all.

I’m still digesting the information, but see some advantages to being a more integral part of the university. I recall a few classes, including Christian ethics, that drew literally scores of students from liberal arts disciplines, and it enriched the dialogue.

Will a Bth continue to be issued from McGill?

Instead of a separate Faculty, It is now in the “Department, Institutes and Schools” section of the Faculty of the Arts. I believe the next stage is giving up the Birks Building for a floor, or half a floor, in the Leacock building. What a pity. I used to donate only to the “Faculty” of Religious Studies. No more.

I graduated from the Faculty in 1962, received a B.D. from McGill, and was Ordained shortly afterward by the Montreal & Ottawa Conference of The United Church of Canada. I AM WONDERING IF THE HIGH STANDARD OF PREPARING MINISTRY CANDIDATES FOR ACTIVE PROFESSIONAL MINISTRY IN THE PARTICIPATING CHURCH DENOMINATIONS (Anglican, Presbyterian, United), with that specific purpose, WILL BE MAINTAINED. I see of benefit of being better informed about other religious traditions, but I am, concerned that this will not be at the expense of preparation for professional Christian Ministry.

It is disappointing that McGill did not consider consulting with its FRS alumni on this move. Does the administration and governors even know what impact FRS has had in preparing past alumni for the roles they now play? Have they stopped to ask their most important constituents-graduates of FRS–what, if any, negative repercussions this move might have for the future? I can’t claim to know whether this is a good or bad move (though I suspect it will inevitably mark a weakening of McGill as a place where Religious Studies can be pursued for its own sake and not only… Read more »

What a cowardly move on the University’s part to ensure that its alumni never would be consulted and yet always there at a moment’s notice begging the same for money. A Faculty is not a School and the idea that demoting from Faculty status to School status better places Religious Studies to respond to changing times is the definition of Humpty Dumpty word smithing. Better positioned in Arts? Mere rhetoric without a shred of evidence. The 1948 agreement which created the Faculty has been lost and in its place a weakened version which Arts may or may not choose to… Read more »

The move from Faculty to School was discussed some years ago and I recall submitting a response. I would like clarification about the relationship between the School and the adjacent theological colleges. A comment posted mentions a large enrollment to an ethics class and I suspect that this kind of response could continue in which case the move from Faculty to School is about marketing, more fees, and hopefully lower cost to the University…this kind of management is happening in many places today. While I have good memories of the Faculty and its small enrollment and easy access to professors… Read more »

I consider myself, like the French Republic, “indivisble, secular, democratic and social.” I have no religious belief whatsoever, and I consider a divinity to be somewhere between implausible and impossible. That said, religion is a very important part of our social, cultural and political history, and I have a great deal of good will towards people who go into the ministry. I like and have used the library in theBirks Building. It would be sad if the building were lost to the former Faculty or to the new School. Dean Cere is putting a brave face on the change. I… Read more »

McGill and the Université de Montréal seem to be on similar paths regarding the place they are giving to or taking from their respectives faculties. At U. de M. They are also extinguishing the Faculté de Théologie… Even though I’m a clinical psychologist, I recently finished all of my Ph.D. course work at the Faculté de théologie at U. de M. I see an intrinsic link between psychology and theology. I was under the impression that universities should be the “salt of the earth”. I’m beginning to think that the salt has lost its flavour and that our universities are… Read more »

The interim dean of the recently-terminated Faculty of Religious Studies writes that the latter’s transition to a ‘School of Religion’ “situate(s) Religious Studies more constructively within the academy.” As one actively involved in the FRS for more than twenty years, I am trying to overlook the slight that this claim (perhaps innocently?) implies. Many laboured for almost a century to achieve a “constructive” dialogue between faith and reason in McGill University. It is not obvious to me that a ‘School’ that is virtually a department within the Faculty of Arts can serve either the University or religious institutions more constructively… Read more »

This interim Dean, Dan Cere, is clearly beating around the bush to conceal what is plainly obvious: THE FACULTY OF RELIGIOUS STUDIES (FRS) HAS BEEN DOWNGRADED INTO AN APPENDAGE OF THE FACULTY OF ARTS. PERIOD. Cere does not say under which Faculty the old FRS has been assigned, and neither does he explain the distinction between a Faculty and School to deodorize the entire FRS demotion. Worst, the old FRS is now a School under a Faculty BUT the McGill School of Music IS NOT UNDER any Faculty at all. It is a free-standing, independent Schulich School of Music. Why???