Four years ago, Richard Hovey found himself “on the wrong side of a hit-and-run cycling accident.” Through physiotherapy and exercise, his superficial injuries healed. One afternoon, he played an uneventful game of tennis. That night, he woke up from a nightmare that he was in the worst pain of his life.

Except it wasn’t a bad dream.

“I had pain shooting down my right leg,” Hovey recalls. “My foot felt like someone was pouring boiling water on it.”

His family physician was baffled by this sudden onset of pain, so Hovey turned to the Alan Edwards Centre for Research on Pain and the pain management unit at the Montreal General Hospital. Hovey knows those places well — because that’s where he studies other people’s pain.

Hovey is an associate professor in the Oral Health and Society Division of the Faculty of Dentistry. Throughout his research career, he’s done extensive interviews with people living with chronic health conditions and pain, particularly pain caused by osteoporosis. His newest research project is inspired by his own experiences living with chronic pain – and it’s being funded by moustaches.

Since 2003, the month-long Movember moustache-growing international fundraiser has generated more than $670 million for programs focused on men’s health issues, such as prostate and testicular cancers, mental health and physical inactivity. Hovey’s project, Homebase, is supported by one such program: the Social Innovators Challenge, a $5.2-million competition open to people with fresh ideas for addressing male social connectedness.

Hovey’s project explores a community-based approach to increasing social interactions for men living with chronic pain. In medical terms, “acute pain” spans the first three months that a person experiences pain; anything longer – whether that’s measured in weeks, months or even decades – is considered chronic pain. And the longer a person lives with chronic pain, the greater their risk of isolation – and that, says Hovey, is where the suffering really becomes serious.

Homebase is the first McGill faculty research initiative funded by Movember. (Movember has funded three Research Institute of the MUHC projects; see sidebar for details.) Right now, the project is in the development stage, with the potential for additional Movember funding for a pilot project and possibly scaling-up to national and international scope.

Hovey’s inspiration came from the men he met at his pain peer support group. People with chronic pain may need to take a leave from their jobs, and often can never return in full capacity – or at all – because of the unpredictable nature of pain. This makes peer support groups very important – especially to men, who tend to restrict their socializing to a small group of friends; take away their workplace relationships and you can decimate their sense of belonging.

Although pain support groups are widely recognized as being crucial to reducing isolation, they are understudied compared to the body of research about the efficacy of cancer or cardiovascular disease support groups. Hovey’s goal is to “expand the idea of support to include the moment a person begins that spiral of chronic pain,” and to flow that early support into a lifelong (if needed) continuum of meaningful personal connections. Early interventions would connect a new chronic pain sufferer with a buddy (another man suffering from chronic pain who can offer friendship and understanding), hopefully cutting off social isolation before it ever starts. The support circle would then expand to include a group of peers.

A third support stage, which is being developed in partnership with the YMCA, uses wider community engagement to encourage socializing, productivity (particularly important for men who may no longer be able to work) and building long-lasting relationships. Hovey refers to the process of helping male chronic pain sufferers feel purposeful again as “building birdhouses,” a metaphor that dates back 20 years to a “really wonderful, very fulfilling” afternoon he spent with a group of neighbours, literally building birdhouses for a school in NDG. Hovey characterizes the birdhouse stage as about “accepting your new limitations, but not wallowing in suffering.”

The men participating in the project have felt the power of the birdhouse. “It’s given me a sense of purpose, something that I was definitely lacking before,” says James, “I’ve got something to work on, something positive to build.” Another chronic pain sufferer, Shane, says that the project “gave me something back that I’d been missing and trying to chase. It’s woken me up in a way to the realization that I still have a lot to offer. It’s changed my whole attitude. I’m doing more, I’m not frozen anymore, I’m not afraid. I feel a little bit more complete for it.” (You can listen to more testimonials from chronic pain sufferers in the Homebase program here.)

“You can transform your thinking to help you move through chronic pain,” says Hovey, “even though it will never go away. Chronic pain is a dance partner for life – but you can learn how to dance so that you lead most of the time, and it follows.”

Hovey knows this from experience. Thanks to a combination of chiropractors, acupuncturists, physiotherapists and the NDG YMCA, he returned to work following a three-month leave. Still, even though Hovey was back to his teaching, research and community outreach work, pain created “a constant level of fatigue that lingers over everything I tried to do.”

Then he found his own “birdhouse.”

“Interestingly enough, what turned my chronic pain around was doing this research project,” he explains. “I get to help people from day one all the way to the end of their lives, if they’d like. It fills all the gaps. How often do you get funding to do something that everyone talks about doing? That helped me and my pain experience became a gift rather than a burden.” 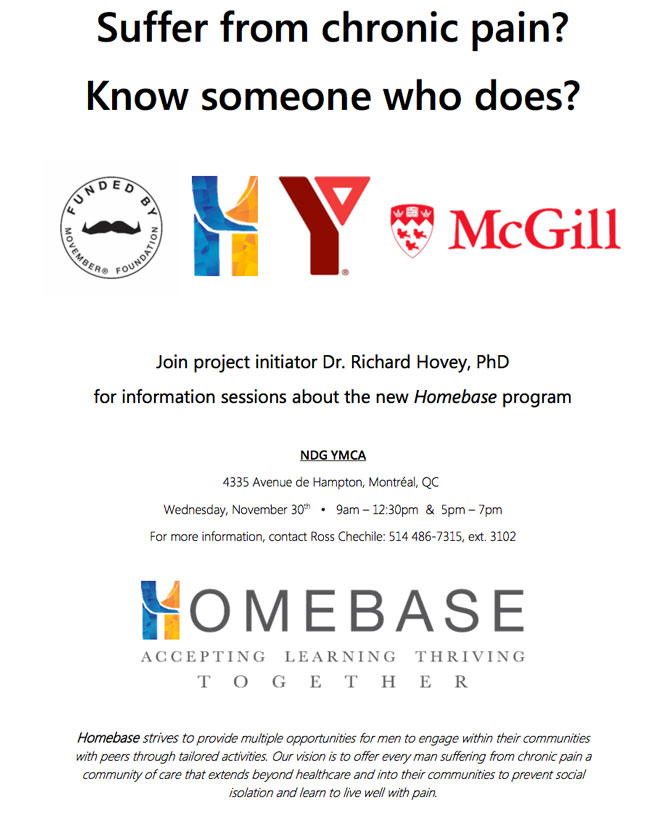 Hi,
I was listening to CBC’s The Current and got very interested about your support group. However, I went to the programme online and checked all links but could not find any information on how to reach you or attend your meetings…etc. Please advise.