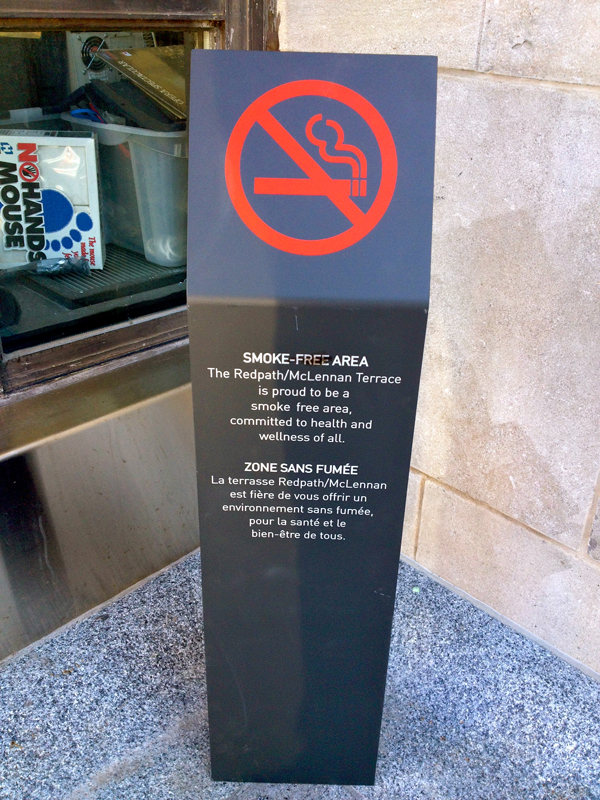 The newly refurbished McLennan-Redpath Terrace in front of the McLennan and Redpath Library Buildings is going smoke-free on Thursday, May 1, in an effort to promote better health and a cleaner environment.

The renovations, which began in 2011, were near completion in January, when access to the terrace was restored.

As a Library website noted, “After numerous complaints from library users, it became apparent very quickly that a solution should be found to address second-hand smoke and the growing amount of tobacco-related litter strewn across the terrace.

“Over the winter months, discussions amongst campus stakeholders were held and the decision was made to designate the newly renovated space as smoke-free.”

Groups that have endorsed this move include the McGill Health and Safety Committee, McGill Gardens and Grounds (a Senate Subcommittee), McGill Library & Archives, the Office of the Dean of Students, the Office of Sustainability, McGill Security Services, the Senate Committee on Physical Development and Health, the Post-Graduate Students’ Society of McGill University (PGSS) and the Students’ Society of McGill University (SSMU).

“Everyone will benefit from this beautiful new terrace especially as McGill emerges out of winter into spring,” said Trenholme Dean of Libraries Colleen Cook. “We listened to users who told us that they had to wade through clouds of smoke to enter the McLennan Library Building. People were also concerned about the waste caused by cigarette butts strewn across the stone and landscaped spaces on the terrace. Many campus partners came on board to support this initiative and advocate for a healthier, cleaner space for all. I hope readers will help spread the word.”

And students have been equally effusive.

“This change will make the terrace and the library space much more accessible for students and staff. It’s a positive step in creating a healthier campus for all of us,” said Erin Sobat, SSMU’s Library Improvement Fund Co-ordinator.

McGill will not hire “smoke police” to enforce the new rules governing the use of the terrace, rather, the University is counting on people to police themselves.

“The success of this change depends upon the thoughtfulness, consideration, and cooperation of smokers and non-smokers alike,” says the website message. “Signage will be on site to help direct people to designated smoking and smoke-free areas.”

“The tobacco epidemic is one of the biggest public health threats the world has ever faced, killing nearly 6 million people a year,” said McGill’s Sustainability Manager, Martin Krayer von Krauss. “More than 600,000 of those deaths are the result of non-smokers being exposed to second-hand smoke and up to half of current users will eventually die of a tobacco-related disease.

“Public health is central to sustainability and there is no doubt that tobacco is a huge burden on our society,” Krayer von Krauss said. “While people have the right to smoke, we need to make it easier for them to quit and making the McLennan-Redpath Terrace a smoke free zone is a good example of how we can help people make the right choice.”

At its February session, PGSS Council passed a motion to support the plan to designate the terrace a smoke-free environment. It was clear, said PGSS Academic Affairs Officer Adam Bouchard in an emailed interview with the McGill Daily, that smoking on the terrace, outside the only entrance to the libraries, was causing significant problems, including the litter of cigarette butts and the clouds of smoke library users and staff had to pass through on their way in and out of the building.