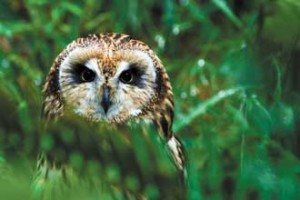 Birds of a feather

Recognized as a an official Migratory Bird Sanctuary by Environment Canada, the Gault Nature Reserve at Mont Saint-Hilaire is the breeding ground of some 80 bird species. While birds of prey such as the Northern Harrier, Sharp-shinned Hawk, American Kestrel, Barred Owl and the majestic Great Horned Owl reign over the area, the summer months also see an increase in air traffic as such species as the Belted Kingfisher, the Eastern Wood-Peewee, the Least Flycatcher, the Eastern Phoebe, the Great Crested Flycatcher, the Eastern Kingbird, and various swallow species flock to the area to nest. Virtually unknown elsewhere in Quebec, the Cerulean Warbler is perhaps the most celebrated visitor to the Sanctuary as it is considered at risk in Quebec.

On Nov. 27, as part of the 50th anniversary celebrations of the Gault Nature Reserve, Pierre Drapeau, researcher and professor at the Université du Québec à Montréal, will present “Mont Saint-Hillaire, A Nursery for Terrestrial Bird Populations of the St Lawrence Region.” He will discuss the importance of forested areas such as Mont-Saint-Hilaire to maintain the biodiversity of the avifauna.

Nov 27; 7:30 p.m.; Gault House; 422 chemin des Moulins;  Mont Saint-Hilaire. Admission: free but reservation is required. To make a reservation, contact Benoît Hamel at 450-467-4010 #229 or by email to info.gault@mcgill.ca. Please note that the lectures will be presented in French.

Take two overtures and call them in the morning

They can soothe the savage beast with a piano concerto or give you a prescription to ease your lumbago. They are, of course, the I Medici di McGill Orchestra, the one-of-a-kind ensemble made up primarily of faculty and students of the McGill Faculty of Medicine. Founded in 1989 by Dr. A. L. Padjen of the Department of Pharmacology and Therapeutics, I Medici will kick off its 20th season on Nov. 23 with its public concert “Pleasure in the Company of Mozart and Beethoven.” Seth Darst, a professor of Molecular Biophysics at Rockefeller University will be the featured piano soloist for Mozart’s Piano Concerto in D minor K466.

Flu-free winter gets a shot in the arm

While getting immunized is no guarantee that you won’t become one of the millions of Canadians who will get blindsided by the flu this year, it will increase your chances of enjoying a healthier, happier winter. On Nov. 25, the Post-Graduate Students’ Society’s (PGSS) Health and Wellness Committee (HAWC), in association with McGill Health Services, will be running Influenza Immunization Day for McGill graduate students and post-docs. Fees are covered for all graduate students and post-docs with the PGSS ASEQ health insurance plan. Those who are not covered under this plan will be required to pay a $15 fee. Services are provided on a drop-in basis and refreshments will be served. So come on down, roll up your sleeve and get ready to put those Kleenex boxes in storage.

While more and more countries are sinking money into space exploration because they view a solid space program as a strategic tool for achieving national priorities, Canada’s investment in space is drying up. The 2008 Canadian Space Summit, will be held in various McGill locations from Nov. 21 – 23 with the theme “What’s Next for the Canadian Space Industry?” Open to everyone from students and the general public to space enthusiasts and aerospace executives, the Summit will explore the many short and long term issues, requirements and goals of the various constituencies that together make up the Canadian space industry.

Oscar Wilde’s best-known and most lasting play, The Importance of Being Earnest, is a quip-filled comedy about mistaken identity that lampoons English high society of the 1890s. In Earnest, Wilde takes aim at the morals and manners of pretentious socialites and skewers all with a masterfully crafted barrage of withering epigrams and nasty asides.

The McGill Department of English, Drama and Theatre Program, is presenting Wilde’s tour de force from Nov 19-22 and 27-29. Directed by Myrna Wyatt Selkirk, the cast is made up entirely of McGill students.

In conjunction with the play, there will be a pair of free talks dedicated to the world of Wilde. On Nov 20, Prof. Miranda Hickman explores “Defying Gravity: Oscar Wilde and the Dandy”. On Nov. 28, Prof Tabitha Sparks discusses “Oscar Wilde and Late-Victorian Culture”. Both talks are free and will be held at 6:30 p.m. in Room 160 of  the Arts Building (853 Sherbrooke St. West)