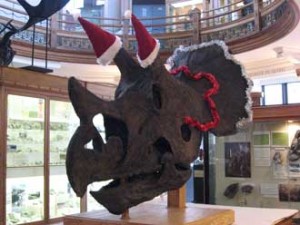 Question: Who is some 65 million years old but still considered a juvenile? Why it’s Sara, of course, the newest addition to the Redpath’s dinosaur family. Sara is a triceratops skull made up of hundreds of small fossilized bones collected on digs led by Hans Larsson, professor of evolutionary biology, and his team of paleontology students in southwestern Saskatchewan over the past three years. The skull of this Jurrasic-era behemoth measures some two metres across and is topped of by a pair of horns that weigh roughly 10 kilograms each. On Dec. 14, the Redpath invites the public to meet Sara and hear about her discovery and the ensuing excavations. This event is a fundraiser to bring new dinosaur displays to the Redpath Museum.

If you’re like most people, seeing the prefix “nano” in the title of a lecture means two things: you’re dealing with really complex research done at the most miniscule scale. No need to panic, however, as the Dec. 11 installment of the Cutting Edge Lecture in Science series will help demystify and simplify the tiny, but vital, realm of nanophotonics. Nanophotonics refers to the interaction of light with structures that have dimensions of a few hundred nanometers or smaller. At that length scale, which is below the typical wavelength of light, a variety of interesting effects arise. Some of these relate to optical interference, whilst others are associated with quantum optics. Andrew Kirk, from the faculty of Engineering will look at current research into the applications of nanophotonics to optical telecommunications and also biosensing to show how nanophotonics enables us to make extremely compact optical integrated circuits that are suitable for integration with microelectronics. Cutting Edge Lectures in Science was initiated in 2003 with the express purpose of fostering communication between scientists in different disciplines as well as between scientists and the public.

Enough with the parum-pum-pum-pum already!

Despite what the department stores might want you to think, the holiday season soundtrack isn’t just an endless loop of the Little Drummer Boy and Jingle Bells. Throughout the month of December, the McGill Conservatory will be staging a series of concerts so diverse that music lovers with the most eclectic tastes are guaranteed to find something to start their toes a-tapping. From jazz on Dec 11 and a percussion ensemble on Dec. 13 to choral music and a garage band concert on Dec. 15 – no musical stone will be left unturned.

Founded in 1904, the McGill Conservatory is proud of its long and established history of providing quality musical education to both the McGill University and Montreal communities. For more information regarding concert times and ticket prices go to www.mcgill.ca/conservatory/.

The founding meeting of an organization dedicated to promoting what may be a solution to be both global warming and food shortages is taking place at Macdonald campus Friday, Dec. 12. Scientific researchers and energy and agricultural industry representatives from across Canada will be gathering to form the Canadian Biochar Initiative, the Canadian branch of a global organization called the International Biochar Initiative.

Biochar is biomass-derived charcoal that can be produced from waste biomass such as agricultural, residential and institutional waste and forestry residues. When applied to soil, it improves crop yields by retaining nutrients and sequesters carbon for very long periods. When biochar is obtained as a by-product of energy generation and applied to soil, it’s proponents say, it is “the only carbon-negative method of producing energy.” New Scientist recently listed Biochar as one of the “Ten Ways to Save the World.”

The meeting will include presentations on biochar and on the International Biochar Initiative. For more information on biochar visit: www.biochar-international.org

It all sounds Greek to me

Anyone who has used babelfish or any other online translation application knows too well the slippery slope one embarks upon when dealing with translated text. An old Italian proverb says “traduttori, traditori” or “translators, traitors.” But are translators really traitors? Does translation undo the confusion of tongues wrought by the destruction of the Tower of Babel or only add to the confusion? What role does translation play in the dissemination of ideas and of the results of the voyages of discovery? Does translation aid or impede understanding among societies and cultures? “Tower of Babel or Universal Understanding? The Art of Translation in the Eighteenth Century” is an ongoing exhibition in the lobby of the McLennan Library Building that addresses these and other interesting questions about the practice of translation in the eighteenth century.

Tower of Babel or Universal Understanding? The Art of Translation in the Eighteenth Century; to Jan. 30, 2009. McLennan Library Building, Lobby, 3459 McTavish St.