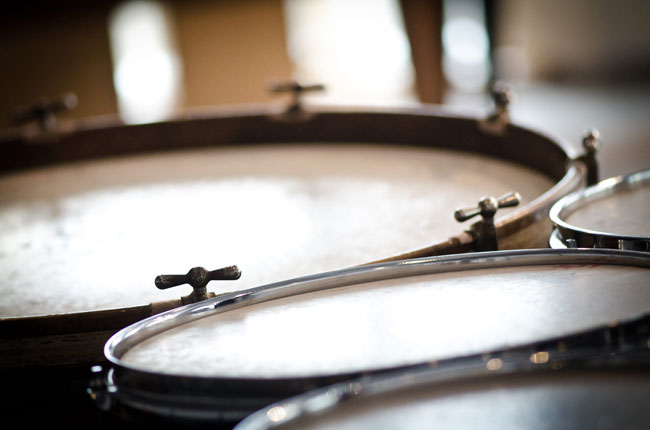 The Schulich School of Music of will present the inaugural edition of Transplanted Roots: Percussion Research Symposium between Sept. 17 – 19. The symposium will feature daytime talks, lecture-recitals as well as four concerts.

Acting as automatons, the three principal players first perform on glockenspiels and crotales and then slowly begin to interact with Miron, whipping him with switches before cutting him open to discover his “music in the belly.” As one of only a handful of American ensembles to program the work — and the only one to perform it with the full two-octaves of chromatic bell plates and original, specially designed music boxes — Akros delivers a performance devoutly faithful to the intentions of the composer.

The finale of the Friday night concert features French percussionist, composer and director Roland Auzet’s epic percussion theater piece A Travers Max. Max is a musician, percussionist and clown. Poetry is born out of the strange manipulation that plays on the exchange, magic, illusion,and the relationship between an orchestra and his hands as the strength of despair.

Max is a strange and wild trainer of musical objects. He inserts his opinions through human sounds evoking strange mood. The tension arises from the friction between this voluntary body and the resistance of things — facing this “big animal that is an orchestra” as set prejudices of the crowd, and even the crowd itself in the form of opinion. This relationship takes the jousting and choreography, confrontation and dialogue with the orchestra at the scene and other surprises.

The first half of the concert features three soloists including Vanessa Tomlinson from Australia, David Schotzko from Toronto and Fernando Rocha from Brazil.

On Saturday evening concert goers will be treated to a mix of new and old works. The opening act is Mauricio Kagel’s Dressur featuring Dressage performing in a circus set built entirely from wood. The musicians mimic the lives of circus animals through chores, humour and musical interactions.

During the daytime, highlights include keynotes speeches by Russell Hartenberger (Nexus and University of Toronto) on Friday at 4:30 p.m., and Steven Schick (University of California, San Diego) on Saturday at the same time. Daytime events require registration as conference participants. Evening events are open to the general public. Tickets are $18 for general admission and $12 for students and seniors. The Saturday afternoon concert is free. For more event information, please visit transplantedroots.org or the Facebook page. Contact Aiyun Huang for more information.