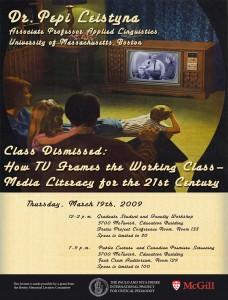 The Paulo and Nita Freire International Project for Critical Pedagogy in McGill’s Faculty of Education will be hosting the Canadian screening premiere of Class Dismissed: How TV Frames the Working Class this Thursday. The producer and writer of the film, Dr. Pepi Leistyna, Professor of Applied Linguistics at the University of Massachusetts at Boston, will introduce the film in the Jack Cram Auditorium at 7 p.m. and a Q&A will follow. Released by the Media Education Foundation, the film explores the intersecting issues of social class, race, and gender in television and won the 2007 Studs Terkel Award for Media and Journalism.

The Freire Project is named after the founder of critical pedagogy Paulo Freire and his partner, Nita Freire, who has carried on his work since his death in 1997. The Project promotes the study of the history and development of critical pedagogy, as well as conducts research and encourages theorizing about the issues the field has traditionally addressed—the interrelationships of power, justice, oppression, and empowerment as they shape educational policy and practice.