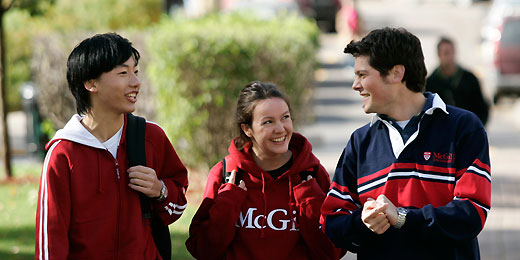 Did you know that one out of five McGill students speaks French as their first language?

Even if McGill was founded by the anglo establishment of Montreal, with names like Macdonald, Strathcona, and McConnell, the character of the student body has changed dramatically to better reflect the reality of Quebec’s demographics.

McGill make an effort to reach out to francophones with its “The French side” campaign in the metro and online. The campaign targets francophones between the ages of 16-24 in anticipation of the March 1 application deadline.

Today the Principal of McGill is Suzanne Fortier, a francophone. If you walk around campus you will hear lots of chatting and laughing in French.

It’s due in part to the good work of the people at Enrollment Services. Part of their job is to increase the user friendliness of McGill for French-speaking students.

Francophone students, like all students, are preoccupied by what programs are on offer, internships, and what kinds of accomodations are available. They also want to know if they can hand in their assignments in French.

The increasing numbers of francophones on campus are also due to the effect of a program called “Voici une Journée à McGill” on campus.

At the beginning of each “Journée’” French-speaking CEGEP students are paired with francophone McGill students with similar interests. These duos then go to class and hang out together for the day on campus getting a feel for student life.

Associate Registrar for Undergraduate Recruitment Jocelyne Younan says “Les Journées” are a chance for students who are considering their options to get a clearer picture of what McGill has to offer, and to test themselves in a mostly anglophone environment. “We want them to get a warm and friendly impression of the campus.”

For some would-be students, McGill is a long way from what they are familiar with – some have never even been to Montreal, and would be hard-pressed to pinpoint McGill on a map of the city. This year the visiting francophone students come from Shawinigan, Victoriaville and Quebec City.

This is going to be a big year for the French side of McGill – the L’ACFAS, l’Association francophone pour le savoir, from May 8-12, is at McGill while the city celebrates its 375th birthday and the country celebrates its 150 years.

At McGill the language of instruction is English, but students can submit work in either English or French. The University has a bilingual language policy and charter. It is one of three English-language universities in Quebec.