The ties between McGill and Scotland are in evidence all around campus, be it the granite benches in Visitor’s Square that were quarried in Scotland, near Aberdeen, and prepared by Fyfe Glenrock of Aberdeen; the ceremonial mace used during Convocation ceremonies that was created at the School of Design in the Edinburgh College of Art, or, of course, the iconic statue of University founder James McGill, himself a proud Scot.

Those ties will be even more evident every time Principal Suzanne Fortier walks through the campus. Earlier today, in recognition of her academic leadership and to honour the important intellectual and research ties that bind the two universities, Prof. Fortier was awarded an Honorary Doctorate by the University of Glasgow during Commemoration Day Ceremonies in Glasgow.

“I am both honoured and very pleased to receive this degree,” said Prof. Fortier. “It is as much a celebration of the long-standing relationship between our universities, as it is a commitment to strengthening our future ties for the benefit of both researchers and students.”

During Prof. Fortier’s visit, she and Prof. Muscatelli will sign an institutional Memoranda of Understanding (MOU) that will support a variety of planned and existing collaborations and initiatives between McGill and the University of Glasgow.

“Over the next five years we plan to work together to create flexible arrangements for student mobility and offer additional opportunities for academic staff to work together on some of the grand challenges facing communities across the world,” said Prof. Muscatelli. “The creation of a jointly supported Principals’ early career exchange fellowship scheme will mark the first concrete expression of this important strategic partnership.”

The historical connections between the Universities of McGill and Glasgow date back to 1756 when the University’s founder, James McGill, was a student at Glasgow. Over the years, the connections between the universities have been further strengthened through a shared commitment to the internationalization of education, expressed through a host of research collaborations and student exchanges. There are currently over 100 Canadians studying at the University of Glasgow

“We are very pleased and proud of Suzanne Fortier,” said Stuart Cobbett, Chair of McGill’s Board of Governors. ”It is a wonderful recognition of her past and current accomplishments. Congratulations to her on behalf of the entire McGill community.”

Prof. Fortier previously received honorary degrees from Thompson Rivers University in British Columbia in 2006 and from Carleton University in 2014. 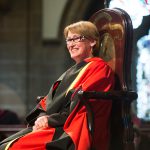 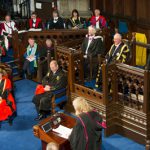 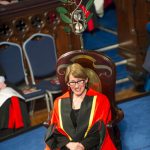 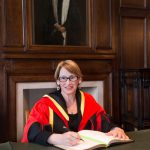 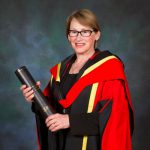 This is a wonderful recognition of both Suzanne Fortier as a person and a scientist – and also highlights the past and present connections between our universities which I had not known about. It also means that this honour will be translated into future collaborations – hence an honorary degree becomes a document not only of past achievements but also one expressing future bonds.

Principal Fortier: A decade in photos

Principal Fortier: A look back