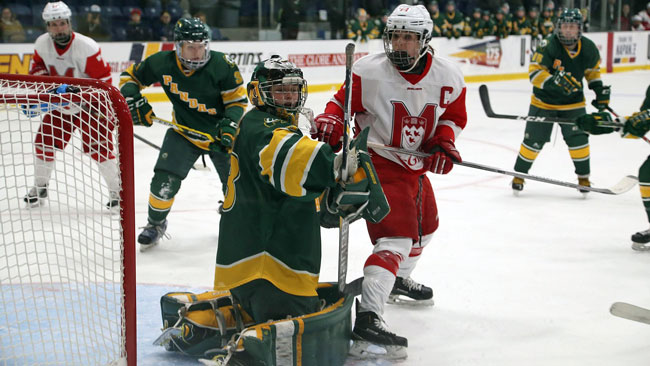 Rookie defenceman Taylor Kezama of Camrose, Alta., scored at 8:13 of double overtime as sixth-seeded Alberta escaped with a 2-1 victory over No.4 McGill to capture the Golden Path Trophy as U SPORTS national champions in women’s hockey at the Strathcona Paper Centre on Sunday. Earlier in the day, in the bronze medal game, goaltender Amelia Boughn stopped all 21 shots she faced to help lift the top-ranked UBC Thunderbirds to a 2-0 shutout over the No. 7 Concordia Stingers.

It was the eighth title for the Pandas, who survived a 41-26 shot disadvantage and somehow managed to kill off a 4-on-3 McGill power-play after an interference penalty was assessed to defenceman Abby Benning at 1:06 of the second extra stanza.

After a 10-minute period of 4-on-4 hockey couldn’t decide a winner, Kezama capitalized on a turnover near the midway mark of the second overtime and put an end to things with a wrist-shot from the top of the right circle that deflected off McGill defenceman Erica Starnino. Alberta captain Sasha Lutz was credited with an assist on the play.

“It didn’t feel real at first, I was like, ‘did this go in?'” said Kezama, whose goal was the first of her collegiate career. “My excitement level went through the roof. It’s the most amazing feeling I’ve ever had in my life.”

“All I had in my head was, ‘This is your last game as a Panda, just stop the puck’,” said Post. “To finish it off here in (Napanee), close to home, is unbelievable – this is what I’ve been dreaming of since my first year as a Panda. There’s no words for it.”

At the other end of the rink, Martlets goaltender Tricia Deguire, a 19-year-old freshman from Sherbrooke, Que., made 24 saves in the loss. Deguire, who was named earlier as the nation’s rookie of the year, started in 40 of the team’s 42 games overall and registered a 27-11 record with eight shutouts, a 1.58 goals-against average and a .934 save percentage.

“Sadly I’ve been down this road before and it’s always difficult to find words to express to the team… I did tell them how proud I was of them,” said an emotional Peter Smith who guided the Martlets to a 29-12-1 record overall. “You look at our team and at the beginning of the year, I don’t know whether people had particularly high expectations for our group, although we did. I’ve been blessed with a lot of real good teams and I’ve always enjoyed it and I have to put this team up there real high in terms of how enjoyable it was. A great group to work with. Great leadership, great energy, worked hard. There’s nothing I would’ve like to have better than for them to have that gold medal around their necks.

McGill was 1-for-4 on the power play and perfect on two penalty kills.

“It’s thrilling beyond belief,” said Pandas coach Howie Draper, whose troops ended a six-year drought to claim their first Golden Path trophy since 2010. “It was tough. McGill is such a strong team and there’s many times where I felt like maybe that game could’ve been ended earlier, but fortunately we got great goaltending from Post, as we have all year long. When we got into overtime we knew it would take one shot and we were just hoping that we’d get that one shot and fortunately we did.”

Few had tabbed the No.6 Pandas, who fell to UBC in their conference final, to go all the way. But the lessons Alberta learned in Vancouver paid dividends when the going got rough at Nationals.

“The scar tissue that was formed after that weekend helped us here,” reflected Draper. “We got down twice against Concordia and were able to come back – we knew that we had to be better, stronger and more resilient.”

After a scoreless opening period, the Pandas made the first mark on the scoresheet with a goal from Amy Boucher of Edmonton at 17:38 of the second, assisted by Hannah Olenyk and Abby Benning.

McGill captain Melodie Daoust, a fifth-year senior from Valleyfield, Que., responded with a power-play marker just 3:15 into the third. She one-timed a cross-crease pass from sophomore forward Olivia Atkinson. Veteran Gabrielle Davidson also drew an assist on the play.

Daoust, who recorded one goal and two assists in the tournament and Davidson, who had three goals and one assist in three games, were both named to the tournament all-star team, along with McGill defenceman Emilia Cotter of Toronto. Cotter, a 5-foot-6 sophomore, earned one assist.

It marked the final appearance in a Martlets uniform for four players, including Daoust and Davidson. Pamela Psihogios (BA ’17), a fifth-year senior from Laval, Que., and Emily Davies (B.Com ’17), a fourth-year defenceman from Ste. Anne de Bellevue, Que., are also moving on.

“That’s what we talked about the most in the room, the four players who are leaving,” said Smith. “The others have a chance to come back and those players don’t, and that saddens all of us. That’s a big part of us, those four players.”

Daoust, who will be earning a physical education degree, is the only departing player without a national title as she was on sabbatical during the 2013-14 championship season, helping Canada win an Olympic gold medal at Sochi. The four-time All-Canadian does have three RSEQ conference titles and finishes her illustrious McGill career with a 116-156-272 record in 143 games overall.

Davidson, who will graduate with a degree in commerce, dressed for 181 games and scored an impressive total of 137 goals and 232 points overall. Psihogios suited up 164 times and Davies had 159 games to her credit.

GAME NOTES: Over 4,500 people attended the tournament in Napanee, which is located about 43 kilometres west of Kingston… It marked the fourth championship confrontation between the country’s two most decorated programs, with all four having been won by the Pandas (2000, 2007, 2010 and 2017)… Alberta’s title is its nation-leading eighth in the 20 years that women’s hockey has been a formally sanctioned sport. McGill was forced to settle for silver for the fifth time in program history. The Martlets have appeared in the final nine times — including eight of their last 10 appearances — and won four national titles (2008, 2009, 2011 and 2014), second only to the Pandas… Alberta is the winningest program in national history, owning eight of 20 U SPORTS championships awarded since the sport was incorporated in 1997-98…McGill is the second winningest program, with four golds, five silvers and five bronze medals in 17 appearances.