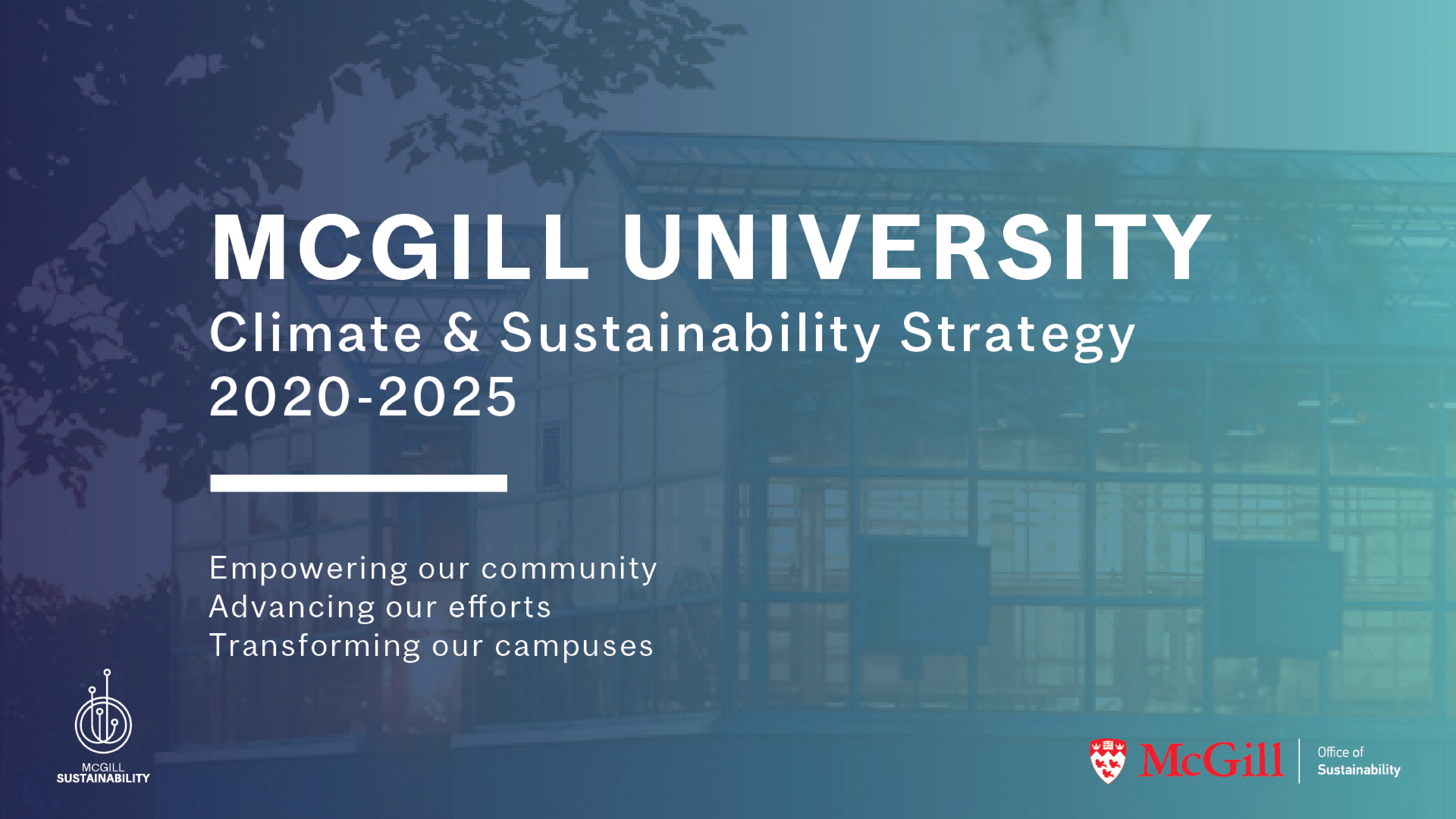 Marking the start of the next chapter of McGill’s sustainability journey, the McGill University Climate & Sustainability Strategy 2020-2025 was endorsed by the Board of Governors, on the recommendation of its Sustainability Committee on Thursday, December 10, 2020.

The Strategy continues to work towards the long-term targets set out in its predecessor, Vision 2020, while also taking a fresh look at sustainability on campus, with eight new categories, two transversal themes, and the addition of a third long-term target: to become zero-waste by 2035.

“The launch of the McGill University Climate & Sustainability Strategy is an exciting moment for the University as we commit to leaping forward in addressing the urgent issues of sustainability and climate change,” said Dr. Yves Beauchamp, Vice-Principal, Administration and Finance. “The Strategy aims to empower the McGill community, advance our sustainability efforts, and, ultimately, transform our campuses into the sustainability hubs of the future.”

With the release of the Strategy, McGill has committed to becoming zero-waste by 2035. This third long-term target set out in the new Strategy came to fruition during the targeted and community consultations, exemplifying the community’s ambition to ramp up the University’s sustainability efforts, and ensuring alignment with the latest in climate science.

The first step in working towards achieving this long-term target, and one of the flagship actions under this new Strategy, is implementing a zero-waste zone on campus. The zero-waste zone will be a clearly delineated area on campus that will serve as an educational space to inform and inspire the community to practice zero-waste habits. This zone will be a shared vision for what a university-wide zero-waste McGill could look like in 2035.

“The long-term targets laid out in the Strategy are ambitious yet realistic, and reinforce the University’s tradition of excellence,” said Francois Miller, Executive Director of Sustainability when speaking to the addition of the new long-term target. “Adding zero-waste as a long-term target is a major step forward in the University’s goal of becoming more sustainable. I want to thank everyone carrying out the work that gets us closer to this target, especially colleagues in Facilities Management and Ancillary Services.”

The eight categories and flagship actions

A vast, community-wide consultation process led to the development of eight new categories, each of which are headlined by a flagship action.

Amongst the 62 actions highlighted in the Strategy, the eight flagship actions stand out due to their level of ambition, potential to mobilize various stakeholders, and contribution to the category objective they fall under. All of the actions laid out in the Strategy will be completed over the course of the next five years.

From January 2020 onwards, the Office of Sustainability led an extensive consultation process to engage with the McGill community in the planning and drafting of the Strategy. Beginning with targeted consultations involving subject matter experts in January and February, and moving to public consultations in March through to the fall – which pivoted online due to COVID-19 – the Strategy was built collaboratively and through the efforts of many.

“Having a robust consultation process that mobilized the McGill community was instrumental in crafting creative and inclusive solutions to the climate and sustainability challenges that we face here at McGill,” said Agathe Moreau, Sustainability Administrator and the lead on the development of the Strategy.

Achieving the commitments made in the Strategy will require effort from all. Read the Strategy or watch the video to find out how you can get involved in sustainability at McGill.

The Office of Sustainability would like to extend a sincere thank you to all of those who took the time to participate in the consultation process. Whether it be through the completion of one of the online forms, through the virtual workshops, or via the targeted consultations, without your efforts the creation of the McGill University Climate & Sustainability Strategy would not have been possible.

I find it unfortunate that there are no goals stated for reducing air pollution or noise pollution. The downtown campus is not a zone of contemplation or appreciation for one’s surroundings for most of the year, but rather a noise factory. In the case of activities related to construction this can be unavoidable, of course, but little effort seems to be made to mitigate the effects. There are many sources which are completely unavoidable: tractors picking up trash, trucks used to water plants, gas powered mowers, leaf blowers, trucks and cars left idling for long periods. All of these could… Read more »

Hi David, thank you for your thoughtful comment about the noise present on campus. There are certainly unique sustainability challenges for university campuses located in city centres. Our landscapes & ecosystems category objective is to develop landscaping projects that reduce the heat island effect, increase biodiversity, and foster well-being. We hope that such initiatives will promote our community’s connection to the natural spaces around us.

Macdonald Campus: Working together toward a sustainable future