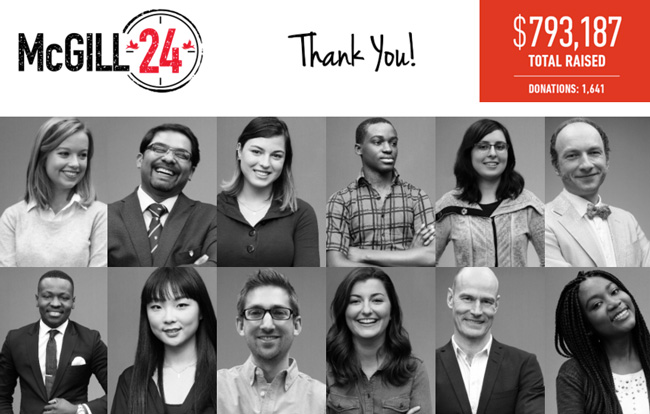 McGill24 may have lasted for one day, but the impact of the community’s philanthropic support will endure for far longer. McGill’s first-ever day of giving raised $793,187, making it the most successful one-day fundraiser of its kind in Canadian university history. In total, 1,641 donations were received, translating into one gift every 59 seconds.

Donors directed their gifts to a wide variety of initiatives across the University, including scholarships, entrepreneurship programs, research support and sustainability initiatives.

But the impact of the event, which was held on March 16, extended beyond dollars and cents by bringing the University’s worldwide community of alumni and supporters together with students, faculty and staff to recognize the impact McGill is having on their lives.

This played out mainly in the social media sphere; the digital campaign was viewed by more than 250,000 people worldwide and featured dozens of students and alumni, from William Shatner to Mike Babcock, sharing the ways in which McGill has impacted their careers. By mid-morning of the campaign, the #McGill24 hashtag had become the top trending Twitter topic in Montreal, and second in all of Canada.

In the meantime, nearly 700 graduates celebrated #McGill24 at alumni events in three time zones, while hundreds of students visited hot spots across the two campuses, where they learned about the impact of philanthropy and had an opportunity to sign thank-you post cards for donors.

The campaign was “an unparalleled opportunity to bring our global alumni community together in celebration of all that makes McGill special,” says Vice-Principal (University Advancement) Marc Weinstein, BA’85, BCL’91, LLB’91. “I am delighted that we were able to raise the profile of philanthropic support within the university, especially because private giving helps our students and faculty accomplish so much. On behalf of the McGill community, I want to thank everyone who helped us reach this milestone, including our loyal supporters, our dedicated volunteers and our committed staff.”

The campaign’s website, mcgill24.ca, will remain online with information about the event’s achievements.

Click on the thumbnail below to watch the thank you video.

McGill to launch its 2020 Centraide campaign