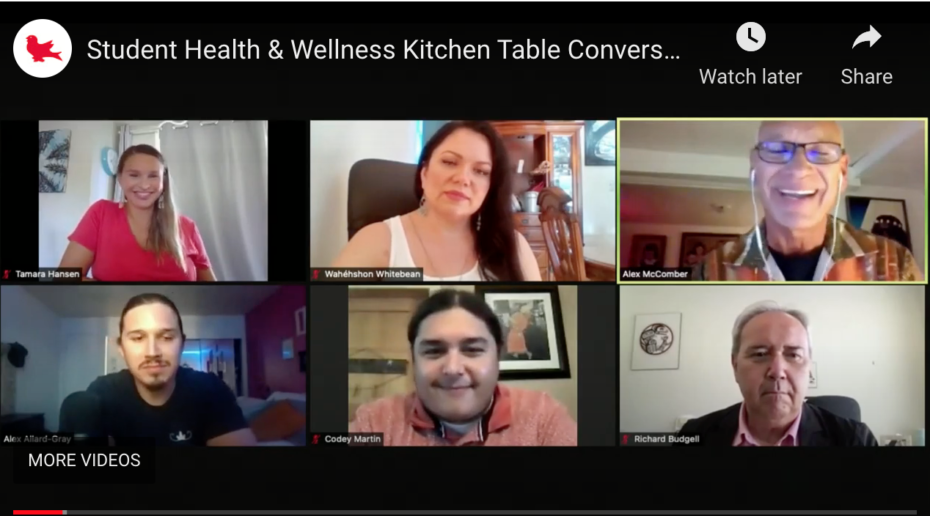 In the recent Student Health & Wellness Kitchen Table Conversation, four guests – current and former students at McGill – discussed their personal experiences as Indigenous students at the University. The Kitchen Table Conversation is part of the Indigenous Awareness Weeks. Richard Budgell and Alex McComber, both assistant professors in the Department of Family Medicine, were co-moderators of the discussion.

In many ways, their stories are dissimilar. They are all at different stages of their careers at McGill – one is an undergraduate, one is a Masters student, another a PhD candidate and one is a recent graduate who now works at the University. They come from as far away as Inuvik, Northwest Territories, and as close as Kahnawake. On top of their busy academic and professional lives, some also are parents.

But, listening to the video of the discussion, it is impossible to ignore many of the common threads binding their respective stories together. They face common challenges, including the feeling of isolation they often feel when leaving behind their close-knit communities.

As an 18-year-old, Alex Allard-Gray, member of the Listuguj Mi’gmaq First Nation located in the Gaspé, left his home come to McGill to pursue his BSc. The transition was a difficult one.

“[Indigenous people] often feel very supported within our communities and when we leave it’s very much like you’re leaving apart of yourself behind,” said Allard-Gray. “You have to rediscover the community at the school or the city that you’re going to,” he said.

But that community was hard to find at McGill, he said. Often, he was the only Indigenous student in his classes – even the large ones of 600 people or more. “I struggled with that… basically telling myself that I had to take McGill on by myself.”

Struggling in the classroom, Allard-Gray left McGill and returned home. “I was crushed,” he said.

Like Allard-Gray, and many other Indigenous students, Tamara Hansen, an Inuk from Inuvik, Northwest Territories, had to leave home to pursue her dreams of postsecondary education. At 15, she convinced her mother to let her go to a school in Edmonton that would best prepare her for university.

Entering university in Alberta at age 17, Hansen wasn’t ready. After a difficult first year, Hansen was on academic probation.

“My long-term goal was to go to med school,” says Hansen. “I was that young and innocent student who had no idea what she was doing with her life. I chose molecular biology. It was really hard and I didn’t know what I was doing. I didn’t have … my family to tell me maybe I should switch.”

After five years, Hansen finished her degree but her marks weren’t good enough to get into medical school.

But the similarities in the four stories were also positive. All four panelists spoke about the strength they gained from their home communities as well as the communities they were able to find at McGill.

Codey Martin, a Mig’maq Gespe’gewa’gi Listuguj, now living in Kahnawake Territory, dropped out of high school in Grade 10. During the discussion, he laughed at the thought of his former teachers “rolling in their graves” at the idea that he is now a third-year BSW candidate at McGill’s School of Social Work.

Martin spoke of his time out of school as hugely rewarding. “I got to visit the world. I got to explore Turtle Island and understand the fundamentals of our teachings and understand those concepts, living that oral history from the first-person perspective,” said Martin. “[There were] lots of sacrifice and humbling experiences throughout my journey.”

The father of two earned his high school diploma on his wife’s urging and, subsequently, was accepted to McGill.

For Allard-Gray, returning home was “subconsciously one of the smartest things I’ve done.” His mother, a cultural educator, got him to come with her and work with the youth of the community.

“I think she recognized something in me that I had forgotten… I really liked the idea of education, not just learning myself but educating the youth,” he said. “Seeing the interest that I could spark in them, especially in sciences, really helped me get my drive back. I applied for readmission to McGill and I was able to get in the year after.”

Back at the University, Allard-Gray sought a perspective that was both new and familiar. “There is that lived experience of being amongst your people. We approach things as not as individuals but as groups as entire communities. I was lacking that,” he said.

Allard-Gray began going to First Peoples’ House. He asked for help when he needed it. He spoke with other Indigenous students, many of whom were facing the same challenges.

“I wasn’t alone,” he said. “I didn’t feel like an imposter in this sea of people who was going to get picked out and kicked to the curb again.”

The long and winding road

Undaunted by being refused by medical schools, Hansen completed a medical lab assistant program and, during her practicum, she landed a job at a hospital in Grand Prairie, Alberta. “I loved it. It gave me my passion to help other people in their times of need.”

Determined to become a nurse, Hansen spent almost two years earning her missing prerequisites online. However, just as she was ready to apply to the University of Alberta, her partner, who is in the military, was stationed to Montreal.

Hansen’s perseverance paid off, being accepted into McGill’s Master of Science (Applied) in Nursing program.

“It’s been challenging but rewarding,” said Hansen. “I’m grateful for my chaotic journey through the healthcare system and the education system. I see the finish line and I can’t wait to reach that point.”

The impact of school, positive and negative

For Wahéhshon Shiann Whitebean, the ability to live and work both in academia and her community of Kahnawà:ke has had a profound impact on her life.

Whitebean, a Wolf Clan member of the Kanien’kehá:ka Nation at Kahnawà:ke, is a PhD candidate in Educational Studies and a Vanier Scholar. Her research focusses on Indian Day Schools in Kahnawà:ke, which were similar to Indian Residential Schools with the primary difference being that children returned home each day rather than living away.

“Doing that research, I’m sitting with the elders and people I knew my whole life including my grandmother, and they are telling me their Indian Day School stories,” she said. “What you end up getting when you sit with someone is a condensed life story… and they are able to reflect and say how that shaped their life. I was blown away by how the schools have affected them [and shaped] who they became as people. I realized that education is so very powerful, both positive and negative.”

Whitebean said her research has had a profound impact on her. “I had to open up during this research. There’s a reciprocation. You have to give, you can’t just get,” she said. “I am re-contextualizing family cycles of violence or trauma and I know where it came from. It came from the schools and it came from the system… It’s like a colonial poison.

“I did all this healing work to get my thesis done and it changed my life. It was the first time I was working on every level – mentally, emotionally and spiritually – at the same time. I learned to value my family and community, in what we’ve been through and who we are, in a much different way,” said Whitebean.

A healing walk in nature