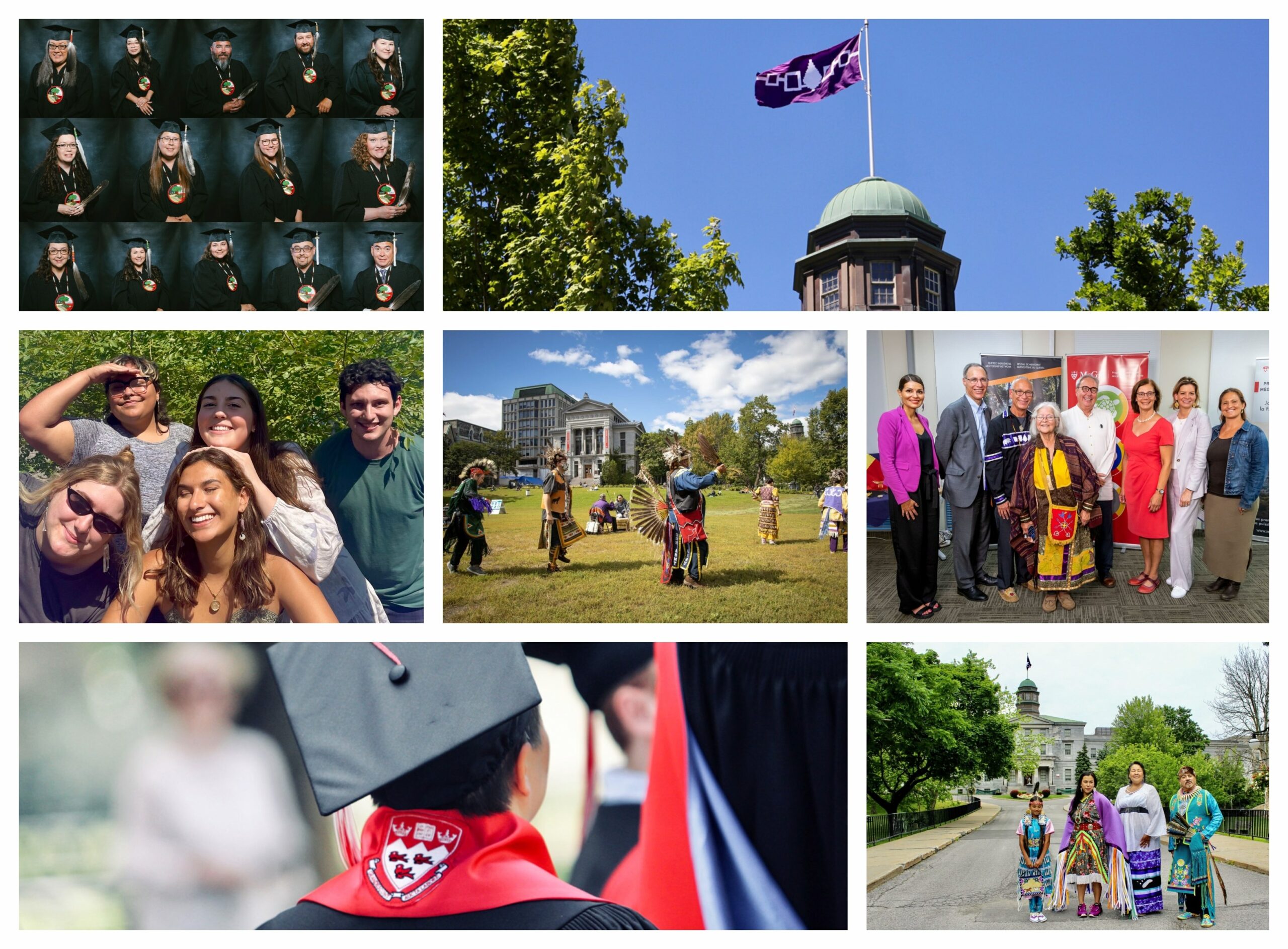 September is one of the busiest times at McGill, and this year is no exception. While things bustle on many fronts, Indigenous Initiatives is the site of extensive energy and activity during the month. The campus schedule for September 2022 is illustrative:

Each event seeks to advance the University-wide response to  the 52 Calls to Action as outlined in the 2017 Final Report of the Provost’s Task Force on Indigenous Studies and Indigenous Education (“Task Force”).

As such, each event is another step in McGill’s journey toward reconciliation.

Good progress – but more work to do

Christopher Manfredi was the Provost who struck the Task Force in 2016. Today, he is McGill’s Interim Principal. On the eve of the National Day for Truth and Reconciliation, Manfredi notes that the University has made progress on or completed 49 of those 52 Calls to Action. While it is a good progress report, he acknowledges “we still have much work to do as a community and as an institution.”

Reconciliation for Manfredi is highly personal. Speaking to the McGill Reporter, he reflects upon his own success. He now stands the helm of one of Canada’s most prestigious universities, just two generations removed from his grandfather’s arrival to Canada in 1924 with just $50 in his pocket.

“When I think about the country that made those opportunities possible – to get from where my grandfather was, to where I am now – I have to reconcile that with the same country that removed opportunities and caused harm to Indigenous people,” he says. “That’s something that weighs on my mind, and it is one of my strong motivations.”

The evolution of McGill

Five years after the release of the 52 Calls to Action, McGill is a university in evolution.

One of the most significant changes has been the appointment of Dr. Celeste Pedri-Spade as the University’s first Associate Provost (Indigenous Initiatives).

Pedri-Spade will oversee McGill’s ongoing responses to the 52 Calls to Action. She will work closely with academic leaders across the University to further define the direction of McGill’s commitment to Indigenous scholars and scholarship, and to greater representation and inclusion of Indigenous peoples within the University community. She will thus play a critical role in furthering efforts to ensure the success of Indigenous students at McGill, and in building meaningful and active partnerships with Indigenous communities in Quebec and across Canada.

“Celeste brings to the role exceptional academic qualifications as a visual anthropologist, exceptional commitment to her community, and expertise on the role of Indigenization in postsecondary education,” says the Interim Principal. “If we are serious about McGill playing a role in reconciliation, it is essential to have a senior member of the leadership team with lived Indigenous experience and expertise in advancing institutional efforts tied to truth and reconciliation.”

In its Final Report, the Provost’s Task Force called upon the University to set a target of appointing at least 35 Indigenous tenure-track or tenured professors by 2032. At present, McGill is over half-way to achieving its goal.

The University is also recruiting Indigenous students and supporting them through a wide range of programs.

The Indigenous Mentorship and Paid Research Experience for Summer Students (IMPRESS) initiative offers Indigenous undergraduate students enrolled at a Quebec postsecondary institution the opportunity to develop leadership and professional skills while conducting research with a McGill professor, or to work on a project at one of the University’s units – all while being paid.

Rachel MacKenzie, a second-year student in Psychology minoring in Indigenous Studies participated in the IMPRESS inaugural session. The Métis student from Vancouver, B.C. worked with Professor Shari Brotman of the School of Social Work and Professor Brotman’s research team.

“Working with the research team provided me with an entirely new perspective of the research process and the impact it will have on improving services for underrepresented and marginalized communities,” MacKenzie said. “IMPRESS has provided me with an amazing foundation for my next three years at McGill, fostering such a welcoming environment and enabling me to form a great support network of Indigenous friendships and professional connections.”

Manfredi also highlights the various educational programs developed by McGill and its partners that are now being offered in Indigenous communities, often in a community’s respective language.

The Faculty of Education’s Office of First Nations and Inuit Education works in partnership with First Nations and Inuit education authorities throughout Quebec – such as Kativik Ilisarniliriniq, the Cree School Board, the Kahnawake and Kanehsatake Education Centres, and the Central Quebec School Board on behalf of the Naskapis of Kawawachikamach – to deliver community-based teacher education programs and professional development.

One such program saw members of McGill’s Faculty of Education teaming up with the Listuguj Mi’gmaq First Nations community in northeastern Quebec to develop a Bachelor of Education degree program taught exclusively in Listuguj, by Listuguj scholars and educators.

“We’re working hard to create partnerships with communities in order to build academic programs that serve their needs,” says Manfredi. “Also, McGill has an expertise in language preservation and revitalization, and we have a responsibility to help that process.”

Transformation isn’t always easy, however. Changes made at an institutional level require reflection, consultation and conversation. The ensuing debates are often impassioned, as witnessed when McGill changed the name of its men’s varsity teams name to Redbirds in 2020.

But, as Manfredi maintains, “anything that’s worth doing is a challenge.”

The key is to work with stakeholders with respect, he says, referencing the New Vic project. “We are committed to working with communities and to proceed in the development of the site in a respectful way.”

In the end, says Manfredi, these efforts benefit McGill and, hopefully, inspire others.

“These initiatives have enhanced the diversity of the University,” he says. “They’ve enriched the quality of the education that we provide to our students, and they help make McGill a place where members of our broader community see themselves represented.”

“As an institution with colonial origins, it is critical that McGill be a leader in the process of reconciliation,” he says. “Our overall objective is to make McGill the leading university in Indigenous studies east of the Ontario-Manitoba border.”