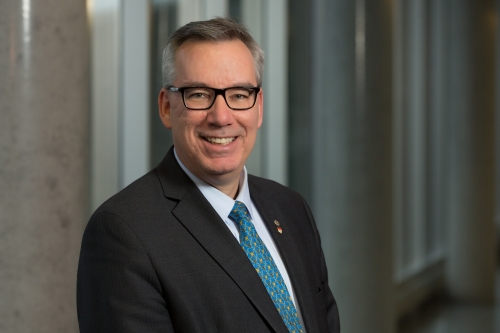 Yves Beauchamp is Vice Principal (Administration and Finance) at McGill. With a long and distinguished career in higher education in Quebec, Beauchamp has a wealth of experience and expertise in academia, administration, government and institutional relations, and project development.

Prior to his arrival at McGill in 2017, he served two terms as Director General of École de technologie supérieure (ÉTS), the Engineering School of the Université du Québec, and was a member of the Department of Mechanical Engineering. Most recently, he lent his expertise as Vice-Rector to a major development project at the Université de Montréal – the new Site Outremont satellite campus and its Science and Engineering Complex.

Recently, Beauchamp sat down to speak with the McGill Reporter about how he got into engineering, his path to McGill and of pursuing his PhD in West Virginia even though, at the time, he spoke very little English.

Why did you become an engineer?

When I was young, I liked to take things apart and see how they worked. I was always working in my father’s workshop trying to fix things and see what was happening inside.

When I was in high school, I was strong in science but not good enough in biology to become a doctor [laughing].  Instead, I became an engineer.

Why the interest in health and ergonomics?

Often your early experiences influence you later on.

When I was doing my Bachelor’s degree in Industrial Engineering at Université du Québec à Trois-Rivières (UQTR), I got a summer job on a research project in health and safety in the pulp and paper industry.

I worked on the project all summer long and I decided to pursue my Master’s degree in health and safety in the pulp and paper industry.

You did your PhD in the United States. Why?

I started looking at the different places that focused on ergonomics and health and safety. The National Institute for Occupational Safety and Health (NIOSH) in Morgantown, West Virginia had an international reputation. At the time, NIOSH labs were housed in the Health Science Center of West Virginia University’s (WVU) campus. I decided that I wanted to work closely with the NIOSH team, so I applied to the doctoral program at WVU.

Even though you spoke very little English at the time?

Yes. When I went to Morgantown I couldn’t speak a word of English. But I knew WVU/NIOSH was the place for me.

How difficult were those early days at WVU/NIOSH?

When I went to my very first course, which was toxicology, I took out my notebook and wrote the date at the top of the page. When I returned home, I took out my notes – it was a blank page, only the date. Not a single note. I hardly understood anything.

I couldn’t believe that I was going to spend the next three-and-a-half years like this. Doing a PhD is already difficult enough but this was a whole other level. I thought to myself ‘what have I done?’

So, what did you do?

I’m an engineer. I worked to find a solution.

I went to RadioShack and bought a small recorder and taped all the lectures. For every hour I recorded, it took at least three hours to review at home using a dictionary.

That must have been incredibly challenging.

It was – I almost cried sometimes because I had chosen such a difficult path.

How quickly did you pick up English?

By the end of the semester, every hour I recorded took me an hour to review at home. Part way through my second semester I didn’t need to record anymore.

I was a professor at UQTR for five years. Then I went to ETS for 25 years, where I eventually became Director General (Rector), a position I held for 10 years.

After your second term as Director General, you wanted to go back to teaching. What happened?

Guy Breton, Rector of the Université de Montréal, invited me for breakfast one day. He told me they were planning the development of a new Outremont campus and they needed someone to lead the project. It was huge – transforming the old railway yard into a new campus. It is the largest university construction project ever in Canada. I like challenges, so I accepted.

And from there you came to McGill?

Yes, but in a somewhat roundabout way [laughing]

As soon as the Outremont project was finalized and the construction started, I wanted to go back to ETS as a professor and researcher. My plan was to be there until I retired.

Then I received a phone call from McGill about the VP Administration and Finance position. I said no because it sounded like operations and accounting – which didn’t interest me that much.

Two months later, I got a call from a headhunter who said I should reconsider. She explained that the portfolio included IT infrastructure, campus facilities, and new infrastructure development projects.

I’m an engineer with experience in development. I also had experience as an academic and an administrator. She said I would be a good fit – and she was right!

After all those years working in institutions that are predominantly French, what was it like to come to McGill?

I was very happy when I came here because I thought it would be a good opportunity to improve my English. But the fact is everybody has improved their French around me [laughing].

Often people will speak to me in English, which is fine and, as soon as I know that person understands French, I will switch and we keep going like that.

If you can express yourself in your native language and the other person can understand it and speak to you in their own language that’s my idea of bilingualism. It is not that difficult to learn how to understand another language. In the end, it’s all about being able to communicate with each other in the most efficient way. That should always be the ideal.

Earlier you said that you were distraught when you first started your PhD at WVU because you had chosen such a difficult path. If you could do it all again, would you have taken that same path?

Absolutely. Yes, it was very difficult initially. Very difficult. But you adapt, you apply yourself and you grow. In the end it turned out to be a great experience – a life changing experience that prepared me well for my future. It’s much better to be bilingual.

Do you have any advice for Francophone students who are thinking twice about going to an Anglophone university?

You should definitely do it. We live in a world where knowing two languages is almost a must – and English is a real necessity. Even if you want to work in Quebec or France.