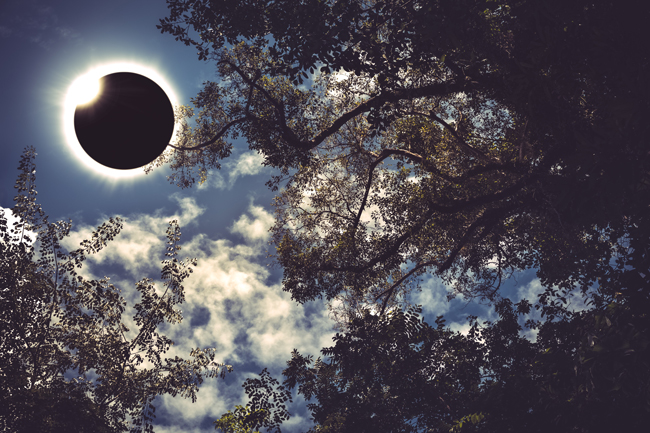 For many ancient cultures, an eclipse – either solar or lunar – was a bad omen.

Some believed the sun was being devoured by various creatures during a solar eclipse (in which the moon blocks out our view of the sun). It was a ravenous dog or dragon in China, celestial snakes for the Mayans, a hungry frog in Vietnam. The Vikings believed that two wolves were in constant pursuit of the sun and moon, and an eclipse occurred when they finally caught their prey.

Ancient Babylonians, among the first people able to predict eclipses, saw a lunar eclipse (in which the earth blocks the sun from illuminating the moon’s surface) as a portent of bad luck. Leading up to an eclipse, they would install a temporary king on the throne, so that he would shoulder any misfortune. The real king would be reinstalled once the eclipse – and danger – had passed.

But we’ve come a long way in our appreciation of eclipses – as witnessed by the incredible enthusiasm being generated by AstroMcGill’s upcoming event to watch the solar eclipse on August 21.

“It’s going to be a huge party,” says Kelly Lepo, coordinator of the McGill Space Institute and the staff facilitator for Astro McGill. “Over 1,000 people have confirmed they are coming on Facebook with almost 13,000 saying they are interested.”

In a word, the response has been astronomical.

On August 21, a solar eclipse will be visible from all of North America. The path of the total eclipse – the Holy Grail of eclipses – will go through the United States, from Oregon to South Carolina.

Unfortunately, at 58 per cent, Montreal’s eclipse will have little noticeable effect on surroundings. “It might look slightly overcast but it won’t get dark. You need 90 per cent to really have a noticeable effect,” says Lepo, who holds a PhD in astronomy and astrophysics. “If you are in a place where there is a total eclipse of the sun, it gets very dark and the temperature will drop very rapidly. All the animals get really confused because it is like nighttime – birds stop singing. It can be very eerie.”

Instead Montrealers will witness the moon slowly move in front of the sun until it “takes a big chunk out of it and more than half of the sun will be covered,” says Lepo.

At the McGill event, AstroMcGill volunteers will show people how to use the onsite solar telescopes – designed to protect people’s eyes; give hands-on demonstrations about the geometry of an eclipse; and animate activities for children to keep them occupied during the event. Free eclipse glasses will be available (while quantities last). The eclipse will also be live-streamed.

AstroMcGill is a student-led, volunteer organization that serves as the education and public outreach branch of the astrophysics group within the McGill’s Physics Department and the McGill Space Institute.

Lepo says that eclipses aren’t as people may think, occurring somewhere in the world approximately twice a year. But they usually take place in the ocean or some sparsely populated area. That’s why astronomers are predicting that this solar eclipse will be the most observed, photographed and filmed of all time.

“This is going to be huge, thanks to social media and to the fact that the total eclipse is going through the United States, the biggest media market in the world,” says Lepo. “There are eclipse chasers who will be travelling from all around the world to take this in.”

Lepo is quick to caution people about watching the eclipse without the proper eye protection.

“The sun is no more dangerous during an eclipse than it is any other day of the year. There will be no death rays shooting from the sun on August 21,” she says. “But during an eclipse, our excitement can override our natural instincts to avoid looking at the sun.

“If you look at the sun – even briefly – you can permanently damage your eyes,” she says.

Lepo suggests purchasing a pair of real eclipse glasses that have special filters that block 99 per cent of the sun’s light. “Sun glasses are not enough to observe a solar eclipse,” she warns. “If you try, you will fry your eyes.”

She also suggests making your own pinhole viewer.

“A pinhole is a great way to observe a solar eclipse. You can probably make one with things you already have around the house. Another cheap and easy way is with a pasta strainer with little holes in it or a slotted spoon with holes in it,” she says.

Warnings aside, Lepo has this bit of advice to eclipse chaser: “There are lots of dire warnings about damaging your eyes during an eclipse. You should be safe, but don’t let that scare you into staying inside,” she says. “Get a pair of eclipse glasses or make yourself a pinhole and go out and enjoy this really amazing natural phenomenon.”

Get more information about the AstroMcGill event.

Note that in less than 7 years Montreal will be in the totality zone of the next solar eclipse;
https://www.timeanddate.com/eclipse/map/2024-april-8#