Ronald Niezen is keen to start the winter semester when he will takes on the new, interdisciplinary Chair, the Katherine A. Pearson Chair in Civil Society and Public Policy, located within both the Faculty of Law and the Faculty of Arts.

Created through a generous gift from the J.W. McConnell Family Foundation, the Katharine A. Pearson Chair in Civil Society and Public Policy is named in memory of a senior program director at the Foundation, Katherine A. Pearson (1955-2008), who was known for her deep appreciation of efforts to address some of society’s most complex issues. The Chair is intended to support teaching and research on civil society, particularly in regard to entities that mediate between the self and the State. Niezen is the first to fill the chair.

“The challenge of the Pearson chair is to bring some of the methodological tools of the social sciences, and of anthropology in particular, to law,” he says, “and that offers the possibility for doing something creative with legal research. In my view, the tools of social research are also a powerful way to apply the law. I would hope to offer something different, a particular understanding of the law which is less about making an impact through the law, and more about looking at what the impacts of the law are.”

He has published widely in the area of human rights and indigenous peoples, including such books as The Rediscovered Self: Indigenous Identity and Cultural Justice (McGill-Queen’s UP 2009), Public Justice and the Anthropology of Law (Cambridge UP, 2010) and, most recently, Truth And Indignation: Canada’s Truth And Reconciliation Commission On Indian Residential Schools, a book about Indian Residential schools that was published in October, 2013, by the University of Toronto Press (see sidebar below).

Niezen will teach the Anthropology of Law in the winter semester of 2014. “I’m looking forward to that quite a bit,” he says, “because it will be a course offered jointly in Arts and Law. We’ll be bringing students from the two faculties together in the same classroom. In our discussions, we’ll have a conversation between Arts and Law students, each making their own contributions and offering different perspectives — and that’s exactly what we’re about here, especially with this appointment.”

He will also be supervising a student-directed seminar in restorative justice, “which applies to work that I have done with the Truth and Reconciliation Commission,” he says.

Niezen’s research has included extensive work with the Songhay of Mali, the Sami of northern Europe, and the Cree communities of Quebec, Ontario and Manitoba. “I look at aboriginal peoples in Canada, in particular the remote reserve communities in the north,” he says. “And I’ve also recently begun a project in Botswana, looking at how a dominant national regime of customary law, which has been formalized over the past century, is being applied in remote communities where there are various different approaches to customary law.”

As a social scientist, part of Niezen’s task in taking up this appointment is to learn a great deal about the law. “I’m doing Professor Kristen Anker’s class on Aboriginal Law this term, and I’m dropping in on the Foundations class, being taught in French by Professor René Provost, basically to see what the approach is to pedagogy at the Faculty — I’m very impressed,” he says. “I’m also trying to throw myself off balance by looking at Extra-Contractual Obligations (Torts) with Professor Shauna Van Praagh. My schedule doesn’t allow for me to take Contracts right now, but that’s on the agenda next, as well as Criminal Law.”

In fact, he says, “my work is broadening into areas of criminal justice that are completely new to me. I’m reading the literature and taking guidance from my colleagues, including Professor Marie Manikis.”

There are many challenges for Niezen as the first person to take on the Pearson Chair, key among which is the list of projects that he would like to put in place. “One of the things I’ve been thinking of is bringing in guest speakers, in particular people who represent the work of the Chair in bridging Arts and Law. I am particularly interested in people who can make contributions to those kinds of connections in talking about their own research.”

As far as the future goes, Neizen is looking forward to his new role as the Pearson Chair. “There are always opportunities inherent when you bring different approaches to research and knowledge,” he says. “One of the opportunities built into this Chair is taking advantage of the different methodologies and perspectives from both social research and law, and making something interesting and innovative out of that. For me, it’s a terrific opportunity to take advantage of something that is unique — and very promising.” 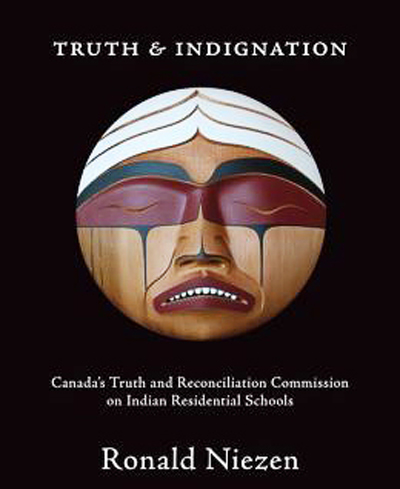 “This is a book about a unique ‘Truth’ Commission taking place in Canada which seeks to better understand the history of residential schools and seeks to achieve ‘Reconciliation,’ defined in various ways, with this history and its place in the state of Canada,” says author Ronald Niezen, a Professor of Law and Anthropology at McGill University and the first incumbent of its new, interdisciplinary, Katherine A. Pearson Chair in Civil Society and Public Policy.

The Truth and Reconciliation Commission of Canada (TRC) was established in 2008. Its mandate is to inform all Canadians about what happened in Indian Residential Schools, by documenting the experiences of former students, their families, and the First Nations, Inuit and Métis communities affected by the residential school system. Its work is expected to conclude in 2015.

In addition to attending Commission events, Professor Niezen has also been interviewing people who are not participating in the Commission: priests, nuns and laypeople who used to work in the residential schools. “I’ve met with people nationally, in Ottawa at the Deschatelets Residence, in Albertville (north of Edmonton) at the Lacombe Residence, and also Oblates who are based around Montréal,” he says.

By looking at the people whose voices are absent from the Commission, Niezen’s book offers another perspective on the TRC. “They’ve been very interested to talk to me about the TRC, and they are giving me different information than you would see being formally presented in the apologies and interventions of the commission itself.”

As a social scientist, Niezen also looks at those people whose voices and identities are being shaped by the work of the Commission. “It’s not just about the TRC itself,” he says, “but about the Commission as a source of identity, for aboriginal people and for all Canadians who are interested in this topic. It is shaping the understanding that we have of our history and our identity.”

This book is, in Niezen’s estimation, an “institutional ethnography” of the TRC, as an institution of justice, and as a source of hope, or of controversy. But Niezen also intends to do a revised, second edition of the book when the Commission has concluded its work, “when the reports are in, the dust has settled, and I’m able to talk to people about the impacts of the Commission.”