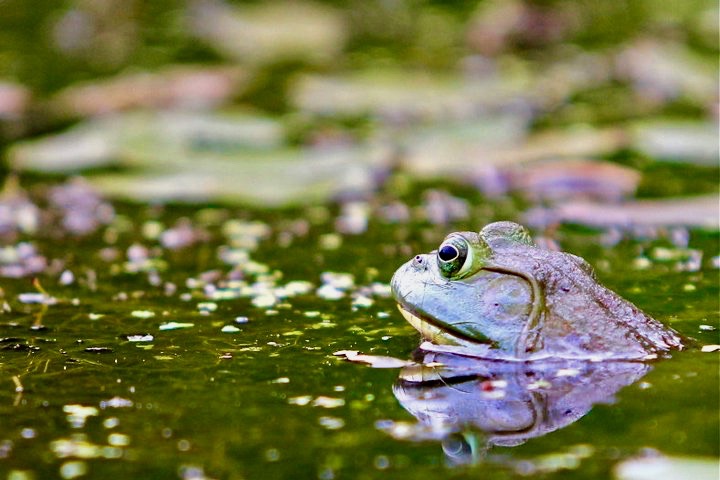 To mark 30 years of research into amphibian population declines and Canada’s pivotal contributions to this important research initiative, the Redpath Museum is hosting the Amphibian Decline Symposium (September 20) on amphibian ecology and conservation biology, bringing together many of the principle researchers now making significant advances in the field.

Erin Muths is herpetologist at the U.S. Geological Survey and a principle investigator for the Amphibian Research and Monitoring Initiative. She has studied demography, disease and conservation in high elevation amphibians for the last 24 years, despite the fact that she earned her PhD on red kangaroos in Australia. Dr. Muths is an associate editor for the Journal of Herpetology and is on editorial boards for several other journals. She has published 100 peer reviewed articles and was awarded the Charlie W. Painter Award for mentorship in herpetology in 2019.

In advance of the symposium, Muths spoke to the Reporter about some of the things she has learned about amphibians in more than two decades she has studied them.

Your research has included reintroducing boreal toads in Rocky Mountain National Park, salamander disease in the desert southwest and Mexico, and demography of chorus frog and boreal toad populations in Colorado and Wyoming. What does your research tell us about amphibians?

My research reiterates what we know: amphibian populations, even in pristine locations like National Parks are having problems. What my research adds, is the quantification of some ideas that have been “standard lore” for frog ecologists, like, females don’t breed every year. We were able to illustrate this in a couple of populations of boreal toads in Colorado and one in Spain, thus providing numbers and percentages to work with.

Additionally, my research also focuses on practicality – what do managers need to know? And what conservation actions can we implement to aid in amphibian conservation? For example, we have been able to translate management ideas into quantitative field research including translocations and toad demographics in Rocky Mountain National Park.

I should point out that the salamander work is really a very collaborative effort in all respects. Collaboration is an incredibly important aspect of amphibian conservation. I can’t imagine doing this job without the mentorship, collegiality and friendships that I’ve come to take for granted in herpetology.

Why should we care about the wellbeing of amphibian populations?

Why not? There are so many reasons, the most practical ones for humans are the huge store of information that is about to be completely lost – a little bit with every animal that goes extinct. This includes potential pain killers and antibiotics for human use. They also eat stuff that we typically don’t like, like mosquitos. Amphibians provide music in the spring. They are charismatic micro-fauna. They keep secrets about their reproduction, their teen years, and their interactions with stressors. They are delicate but robust, and have much to contribute to this fragile blue dot.

Is climate change a main driver of amphibian decline?

We would all love to have a “smoking gun” to point to as the main driver behind amphibian decline. Unfortunately there isn’t one. Biology is complicated, but not intractable and our collaborative work illustrates that. My broad-scale work with colleagues indicates that climate change is an important factor in the decline of some amphibian populations, but the degree of impact varies. Likewise in our demographic meta-analysis, we found that there are some populations where specific weather covariates clearly affect amphibian survival and that, in turn, those covariates (like snowpack and pond drying) are affected by a changing climate.

You’re coming to the Redpath Museum at McGill to participate in the Amphibian Population Declines symposium on Sept 20. What should we expect that you’ll address?

Research into amphibian declines began with showing, quantitatively, that declines were real – estimating demographic parameters such as survival and population growth rates played a role in that. In this talk I plan to use a case study on boreal toads to show how we can attempt to identify mechanisms behind declines by asking demographic questions within the context of disease, temperatures, and community. I hope to illustrate that such work contributes to identifying local-scale conservation measures but also sets the stage for broader-scale efforts.

Benedikt Schmidt: “The future of amphibians does not look...