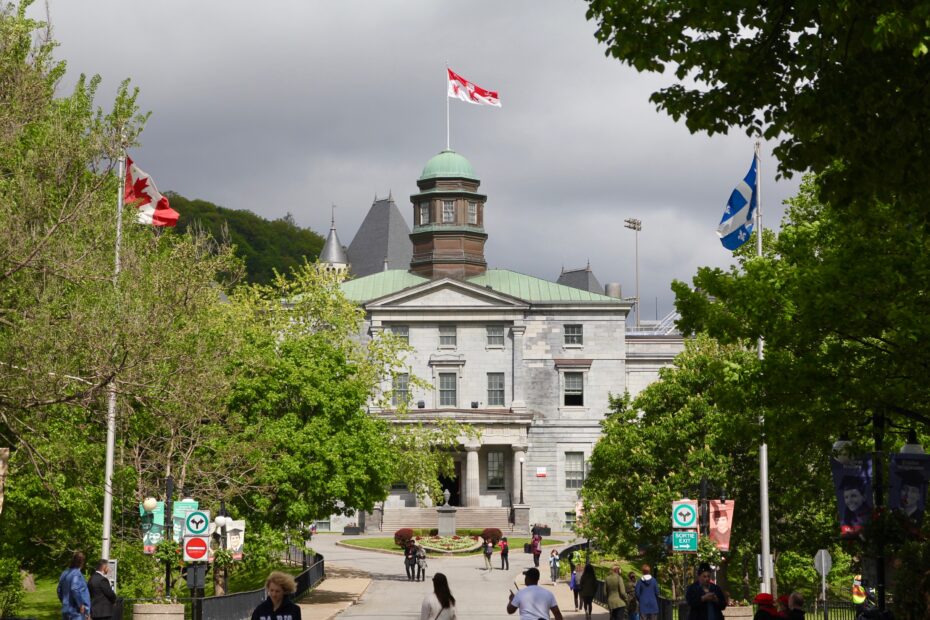 On April 20, Fabrice Labeau, Deputy Provost, Student Life and Learning; and Christopher Buddle, Associate Provost (Teaching & Academic Programs), hosted a virtual Town Hall to update the McGill community on the extensive planning currently underway to prepare for this return. Close to 1,500 students, staff and faculty participated in the event.

This marked the second Town Hall since McGill announced in-person teaching for the Fall 2021 semester, along with a progressive return to on-campus work for administrative and support staff.

“I know everyone is extremely busy and we really appreciate you your interest in this event and appreciate your desire to be updated around what the fall planning is looking like,” said Associate Provost Buddle in his opening remarks. “We promised that we’d be back about every month or so to give you additional updates … and that’s what we’re here for today.”

Deputy Provost Labeau delivered a presentation outlining where McGill is in terms of preparing for Fall 2021.

As he did in the most recent Town Hall on March 12, Labeau went over the five potential September 2021 scenarios that the University is preparing for, from the least optimistic Red Alert Equivalent that includes lockdowns and working from home; to the Optimistic/Back to Normal scenario in which the pandemic is over and everything returns to normal.

The Deputy Provost explained that planning teams are continually reassessing each scenario based on seven criteria:

“What we told you [in the March Town Hall] is that we had two scenarios that we were watching much more closely as being the most likely scenarios as,” said Labeau. “We call these scenarios Realistic and Realistic Plus – and they are two versions of a very similar reality.”

In the Realistic Scenario, all at-risk people would be vaccinated and a sizable percentage of the general population will also be vaccinated. Public health guidelines would include wearing masks and keeping one meter apart. “It would still be a pandemic atmosphere, but with much-relaxed directives and with much less risk to individuals participating in activities because of the vaccination situation.”

From planning to operationalization

Deputy Provost Labeau told Town Hall participants that preparation for the Fall 2021 semester is divided into two main phases, Preparation and Operationalization. At present, Labeau estimates that the team has completed roughly 60 per cent of the planning, and is slated to finish sometime in mid-May.

From there, the team will begin the Operationalization phase. Labeau said that during this phase, “we will go into writing the detailed procedures, the detailed directives, putting together the processes for approvals of activities, and making sure we have the right materials in place in terms of communications, etc.”

To plan for each of the five scenarios, Labeau and his team must consider eight “functional areas” of the University, including Physical Security; Academic Programs Delivery; Faculty and Staff; Study Hubs and Flex Space; Services for Students; Residence and Food Services; Events/Extracurricular Activities; and Non-Downtown Locations.

The planning team must produce a summary for each functional area in all five scenarios.

The Deputy Provost went into particular detail when it came to the Realistic scenario for the Fall 2021 semester because “this is the one that we consider as the most likely scenario to be our reality in September.”

Labeau went over a graphic outlining the eight functional areas and updating people on how far along the planning process each is.

For example, the planning for Physical Security is 80 per cent complete. Labeau said that, in this scenario, campus buildings would be open only to people with business there. To restrict the regular through-flow of pedestrian traffic, only designated entrances would be accessible and “COVID patrols” would ensure rules are respected. Each entrance would be equipped with a mask dispenser.

On the academic front, McGill will schedule as many on-campus activities as possible in the Realistic scenario, including labs and lectures with fewer than 150 people (as per capacity).

Managing the flow of people

Under the Realistic scenario, the beginning of the Fall semester will see a staff occupancy of 30 per cent. Because of the sudden influx of students and faculty on campus, Labeau says it will be important to “manage the load and the density in our buildings.”

“We will monitor how well things are going, how the distances are being respected, and [see] if we can we actually manage the flow of people,” he said. “If we can then we’ll slowly increase our occupancy of staff in the buildings going up to maybe a hundred percent,” depending on capacity and configuration of each location.

Each unit will decide how best to fulfill the 30 per cent staff occupancy, again based on specific mandates and location-related constraints and configurations.

The Deputy Provost closed his presentation by saying as the semester draws nearer, people will be contacted by their faculty or unit and provided with specific information regarding their return to campus.

Watch the recording of the complete Town Hall

Spreading of misinformation makes for ‘worst possible environment’ for...

Return to campus life a boon for Montreal