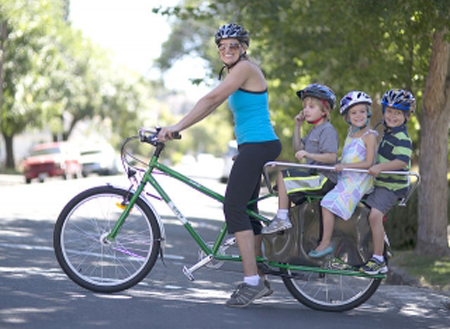 Cyclists in Montreal and Toronto can now choose the least polluted routes to get around their cities thanks to an online tool developed at McGill. Sometimes a detour of less than 1 km can make for a much less polluted ride. The researchers who developed the online tool were Marianne Hatzopoulou (project lead); Guillaume Barreau (online tool developer); and Scott Weichenthal and Mark Goldberg (health perspectives on cycling and air pollution).

The tool uses maps of traffic-related air pollution to estimate outdoor concentrations of pollutants such as nitrogen dioxide (NO2) and ultrafine particles (very small particles produced during fuel combustion) along roadways throughout in Montreal and Toronto. Both of these pollutants have been associated with adverse health effects.

Cyclists enter their origin and destination on the map. They are then provided with routes that are likely to decrease their exposure to traffic and traffic-related air pollution, along with the shortest route between the two points. Sometimes a detour of less than 1 km can result in a much less polluted ride. The tool will continue to be updated with new data that the researchers collect on air pollution in Toronto and Montreal.

Watch the video about the clean ride mapper project.

Pedestrians and cyclists to share space on downtown campus