In Michael A. Meighen’s last convocation address as Chancellor of McGill University, he looked forward to the end of the pandemic, when McGillians can once again safely “switch off your webcam, get out of your home office and be with the people you really care about.”

“For me – and I suspect for most of you as well – social media and video calls are just not enough,” he said during the virtual ceremony. “We miss the simple things, like a chat over coffee, getting together for birthdays, working with classmates at the library and shaking hands with a new acquaintance. And also, perhaps hugging a good friend. And as the months go by, we realize that these simple things are also the most important things because we were meant to be in each other’s company.”

In spite of all the challenges this year, McGill conferred degrees on 7,976 graduates this spring. Meighen commended their hard work, commitment, sacrifice and success.

“Every graduate keeps with them a memory of their graduation. Yours will certainly be different, but it will also be unique. In the history of McGill, there can only be one Bicentennial graduating class and you are it!”

Seven years of service and leadership

The Chancellor is the titular head of McGill University, and serves as an ex officio member of the Board of Governors. The Chancellor’s duties include presiding over Convocation and representing the University at official functions.

Michael A. Meighen began his first term as Chancellor in 2014, and was reappointed in 2017. A prominent lawyer with a distinguished legal career, he notably served as legal co-counsel to the Commission of Inquiry on War Criminals in Canada. He was appointed to the Senate of Canada in 1990, where he served until his retirement in 2012.

Meighen is a graduate of McGill (BA’60) and a lifelong supporter of his alma mater. Throughout the years, Meighen and his wife, Kelly, have been generous supporters of organizations supporting education, health, the arts, poverty, youth at risk, drug addiction and nature conservation—and the couple have been particularly dedicated to advancing guidance and support for students at McGill. During the 2000s, Michael Meighen served as the co-chair of Campaign McGill, working diligently to encourage alumni and friends to support the University. In 2012, the University presented him with an honorary degree.

During today’s Convocation ceremony, Principal Fortier thanked Meighen for his seven years of service and leadership. She quoted Meighen’s encouragement to students: “In the words of… Michael Meighen: ‘Your life should be a journey towards a destination – a destination where success is measured by what you have contributed positively to society. Continue to get out there into the world and to be engaged!’

“Chancellor Meighen has lived these words throughout his life. After seven years of dedicated service to our University, this will be his last convocation as Chancellor. On behalf of the entire McGill community, thank you, Chancellor Meighen, for your outstanding leadership.”

“Most of all, I’ve had the honour of congratulating our graduates as they crossed the stage, sometimes with a broad smile, a casual greeting or even a request for a selfie. These are memories I will cherish always.”

“As my tenure as Chancellor comes to a close… I wish you well on your journey and I encourage you to stay connected and close to McGill, as I intend to, because McGill will always be your home.”

Meighen also welcomed his successor, John McCall MacBain, who will be installed as Chancellor on July 1, offering his “very best wishes and the hope that your years as McGill’s 20th Chancellor will be as rich and rewarding as my years have been.” 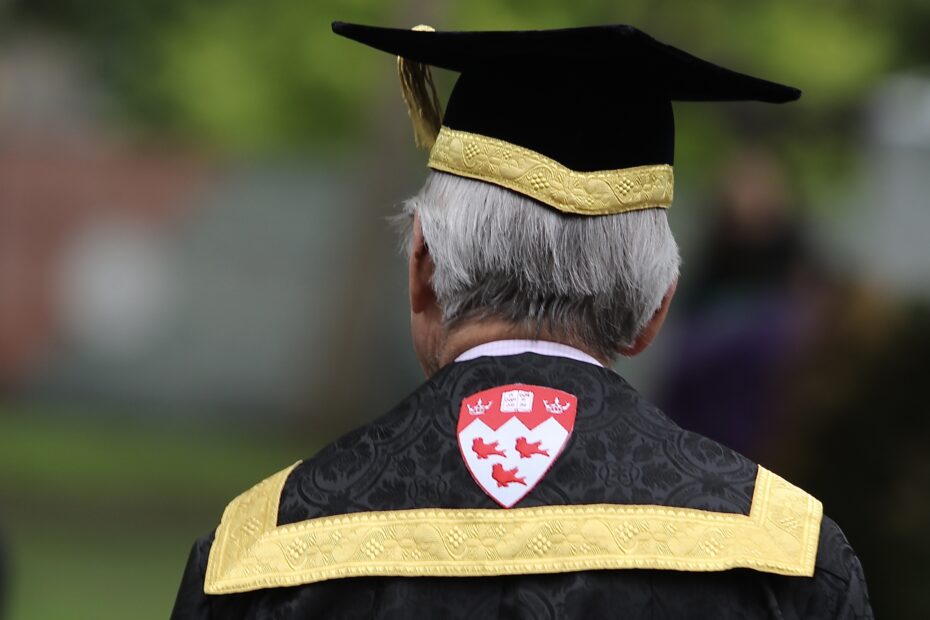 Michael Meighen reflects on his years as Chancellor