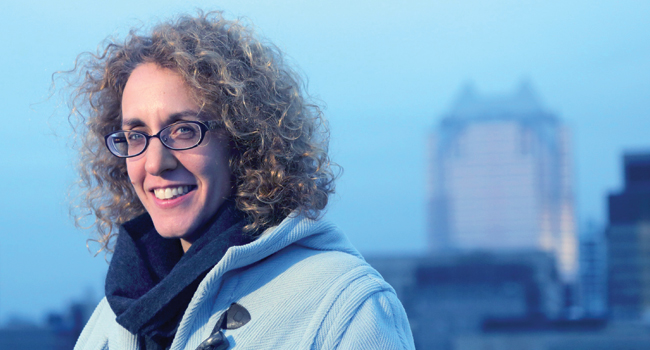 The first cover of Headway, in 2005, featured McGill astrophysicist Vicky Kaspi. The Canada Research Chair in Observational Astrophysics and her team had recently discovered 20 pulsars in a single star cluster in the Milky Way. Pulsars are a type of neutron star – a dense remnant of a collapsed massive star – that spin at staggering speeds, generate strong electromagnetic fields and emit beams of radio waves. Only 10 years later, Kaspi and her team have made several other major breakthroughs, including detecting the fastest-rotating pulsar ever found and verifying Einstein’s theory of general relativity by observing a twin-pulsar star system (two pulsars locked into close orbit around one another): they confirmed that the spin axis of one of the pulsars does “wobble”, as predicted.

Headway caught up with Kaspi, who holds the Lorne Trottier Chair in Astrophysics and Cosmology at McGill, to discuss what she’s looking into now.

You have a sabbatical leave coming up. What will you be working on?

McGill – through the leadership of my cosmologist colleague Matt Dobbs – is participating in the Canadian Hydrogen Intensity Mapping Experiment (CHIME), a radio telescope designed to study dark energy, which is believed to be responsible for the acceleration of the expansion of the universe. CHIME will allow us to study large swaths of the sky at the same time and gather huge amounts of data, including on radio pulsars. We’ll be able to study many pulsars at any one time 24 hours a day. This could help us detect gravitational waves, distortions in space time caused by the motions of large masses in the universe, a phenomenon predicted by Einstein’s theory of general relativity but never confirmed.

You were the principal investigator on a project that recently led to the discovery of a “fast radio burst” detected by the Arecibo Observatory telescope in Puerto Rico, and which confirmed that these bursts really are of cosmic origin. What’s next on that front?

Only half a dozen of these millisecond bursts have been detected so far but we estimate that they occur about 10,000 times a day. There is strong evidence suggesting that they are coming from far outside our galaxy, so they must be really bright phenomena. With CHIME, we should be able to see quite a few every day, so it will help us understand them better. Because at the moment, we have no idea what is causing them.

The astrophysics group at McGill has grown a lot in the past 10 years. Tell us about the newly created McGill Space Institute (MSI).

The goal of the MSI is to bring together everyone at McGill who is doing space-related research, beyond just astrophysics. For example, an exciting research avenue right now is extrasolar planets (planets that do not orbit the Sun) and that is an area where astrophysics intersects with research pursued in other departments, such as Earth and Planetary Sciences or Atmospheric and Oceanic Sciences. The MSI will help foster interdisciplinary collaborations and keep our research directions fresh.

Since 2005, Vicky Kaspi has received the Natural Sciences and Engineering Council of Canada (NSERC)’s Steacie Prize and John C. Polanyi Award, as well as additional funding from NSERC, the Canada Foundation for Innovation, the Fonds de recherche du Québec – Nature et technologies, the Canadian Institute for Advanced Research and CANARIE. CHIME is funded in part by the Canada Foundation for Innovation. On April 14, she was named the recipient of the 2015 Killam Prize for the Natural Sciences.

More articles on Vicky Kaspi in the McGill Reporter