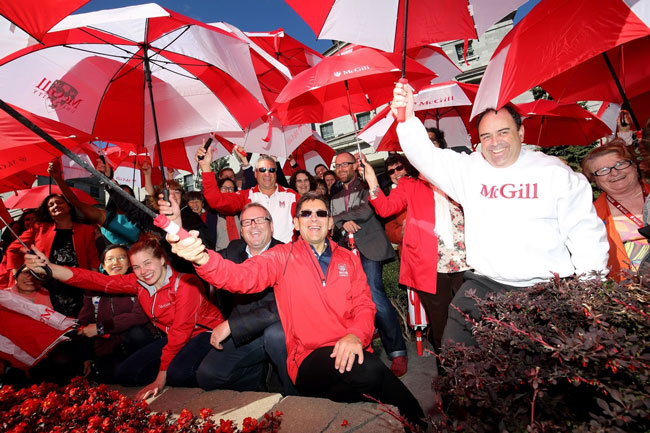 The sunshine didn’t stop thousands of Montrealers from breaking out the umbrellas on Thursday, September 29, for the joyously noisy kickoff to the city’s annual Centraide campaign – and McGillians had the biggest, and loudest, showing in recent memory.

This year’s campaign has two goals. One is to raise $500,000 for Centraide, which supports more than 350 agencies in and around Montreal dedicated to providing services to low-income, socially marginalized and vulnerable populations. Last year’s citywide campaign raised $54.3 million, which is being used for everything from promoting self-reliance and empowerment among children and youth, to providing seniors with healthy food, to helping people secure stable housing. An estimated one in seven people in Montreal receive assistance from a Centraide-supported agency.

The McGill campaign’s other goal is to increase the participation rate among the University community. Although McGill raises more money than any other postsecondary institution in Montreal – and last year’s campaign dramatically exceeded its target amount – our participation rate is comparatively low when compared with peer institutions. Even the smallest amount makes a difference; a message will be going out to the community next week about how to register for an automatic payroll contribution.

Keep watching The Reporter for news about the many Centraide fundraising events that will be held in the weeks ahead.