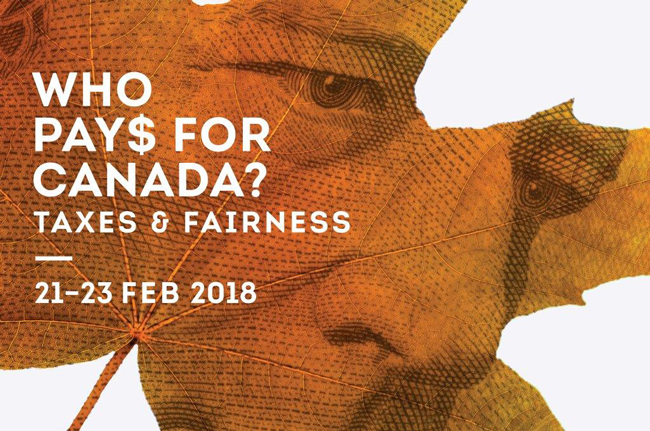 This year marks the centenary of income tax in Canada – first collected in 1918. With this in mind, the McGill Institute for the Study of Canada (MISC) will look at ‘taxes and fairness’ during it’s annual conference. From Feb. 21–23, Who Pays for Canada? Taxes and Fairness, will feature a diverse array of speakers and experts at the Faculty Club.

The Conference will kick off with a screening of Montreal film maker Harold Crooks’ documentary The Price We Pay, featuring Quebec tax expert and author Brigitte Alepin.

Based on the book La Crise fiscal qui vient, by Alepin, a Harvard-trained tax specialist and tax policy advisor, and Professor of Taxation at the Université du Québec à Montréal, the film documents the dark history and dire present-day reality of big-business tax avoidance, which has seen multinationals depriving governments of trillions of dollars in tax revenues by harbouring profits in offshore havens.

Alepin will be on hand after the screening to answer questions from the audience.

“If the people of Canada aren’t collectively pursuing fairness, then they will get unfairness,” says conference organizer and head of MISC, Historian Elsbeth Heaman. “That’s history speaking. And unfairness is corrosive: it eats away at trust and social solidarity. These things are beyond price. When people don’t trust the press or the courts or the schools or social services or the tax system; when they think that such public goods serve the wealthy few rather than the many, they boycott them and put their faith in populists. I want to hear economists, philosophers, lawyers and everyone else say what they think fairness means and whether it currently animates our public policies.”

Heaman goes on to say that modernity is the result of tax revolts: not just the American Revolution, but also the French Revolution, the English Revolutions, even the Magna Carta was a tax revolt. Confederation began life as a tax revolt because Upper Canadians – people living in what was about to become Ontario – presented what they saw as a tax transfer from Upper to Lower Canada, effectively from English Canada to French Canada.

“We are witnessing, right now, a global tax revolt amongst the wealthy, by means of tax cuts and international tax havens. One consequence is austerity politics; another is deeply regressive alternatives to taxation. Regressive taxes are those that hit the poor more than they hit the rich,” says Heaman. “One example might be government funding by lotteries. Canadians pay hundreds of dollars per capita for provincial lottery tickets. They are a kind of voluntary taxation paid disproportionately by poor people. Another example is ‘taxation by citation:’ local communities roll back taxes to pay for civil services like police and fire protection, and instead ramp up fines for minor offences like jaywalking. Michael Brown’s death at the hands of a policeman in Ferguson, Missouri, reflected the worst possible consequences of that kind of ‘taxation by citation.’ If the citizenry doesn’t demand fair taxation for fair services, they won’t get it.”

The conference is aimed at people who want to understand how “fairness” is discussed nowadays. The goal is to embolden the public to argue back with the specialists in an attempt to get university professors to explain themselves to one another and to the public, such that the public can confidently argue right back again.

This conference is accredited for Continuing Legal Education hours by the Barreau du Québec.

Get more information and register online

Mireille Paquet on the Canadian and Quebec immigration

Perspectives on the 2019 Federal Elections