The annual Crossroad for BioTransfer event wants to turn “aha!” into life-saving innovation 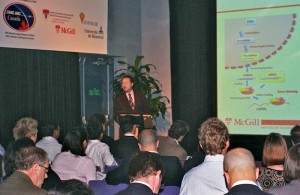 History teaches us that major medical breakthroughs can languish for generations or even disappear completely if they don’t bridge the gap between research and commercial application.

The cavity-fighting properties of fluoride, for example, were first noted by researchers as early as the mid-19th century, but the element didn’t find its way into toothpaste for another century. Before the modern era, uncontrolled tooth decay was a killer, a harbinger of deadly infections, cardiac disease and shortened lifespans. If fluoride’s importance had been understood and commercialized earlier, millions who died young might have lived longer, healthier and happier lives.

Even if today’s discoveries are on an entirely different technological plane, the principle remains the same. Academic researchers and the businesspeople who turn their discoveries into commercial products need a forum where they can meet, interact and bridge the gap between their very different cultures.

Enter the Crossroad for BioTransfer, an event organized by the National Research Council of Canada, Gestion Univalor and McGill’s Montreal Excellerator. This year’s event, held on May 5, 2009, at the NRC’s sprawling Biotechnology Research Institute near Montreal’s Hippodrome racetrack, was oversubscribed. Nearly 300 pharmaceutical and biotech executives, venture capitalists and industry consultants applied for 200 available spots, and the opportunity to hear some of Montreal’s best and brightest researchers show off high-impact technologies with high commercial potential. More than a dozen prominent scientists from McGill and the MUHC were there.

“Events like this provide an excellent opportunity for McGill and other Montreal research labs to present their discoveries to a panel of biotech companies and investors,” said Dr. Nicholas Bertos, a cancer researcher from the lab of Dr. Morag Park at McGill’s Rosalind and Morris Goodman Cancer Centre.  “It’s important to familiarize one with the other, to get across an idea of the spectrum of research that’s available and to forge collaborations. And the Crossroad event focuses on the Montreal area, allowing the opportunity to create strong local collaborations.”

Bertos came to Crossroad to talk about an exciting new prognostic test for breast cancer developed in Park’s lab, which promises greatly enhanced prediction of clinical outcomes for patients; Québec Science recognized the research as one of its Top Ten Discoveries of the Year. Gairdner Prize laureate Nahum Sonenberg, a senior researcher at the Goodman Cancer Centre, talked about his co-development with Massad J. Damha of an entirely new method of inhibiting viral infections, from influenza to HIV to Ebola and herpes. Moshe Szyf, of the Department of Pharmacology and Therapeutics, appointed to the new GlaxoSmithKline-CIHR Professorship in Pharmacology on May 13, spoke about his lab’s discovery of a novel enzyme sequence that can inhibit the growth of cancer cells.

Dr. Janusz Rak of the Department of Pediatrics and the Montreal Children’s Hospital Research Institute promoted his discovery of an entirely new, highly accurate and non-invasive cancer screening process using oncosomes: small, bubble-like projections on the walls of many cells. This research also garnered Dr. Rak the top spot on the Québec Science Top Ten Discoveries of the Year (see story on page 5).

“Academics normally deliver their eureka moments to the scientific community,” said John DiMaio, manager of the Life Sciences Group in McGill’s Office of Technology Transfer. “It’s a rare event when they need to take a quantum leap and put it in a market context. The Crossroad for BioTransfer is such an event that fosters reflection: Here’s our discovery, here is the competition, here is why our discovery is better and of more benefit to the patient. And here is how we translate it into a functional product. ”