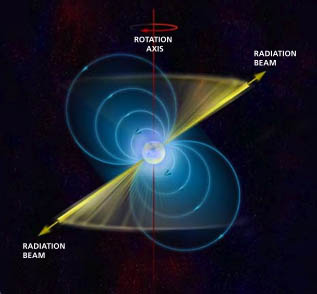 For an astronomer, finding the fastest-spinning pulsar on record is like, well, nothing in this world. “It’s not quite like striking gold and not quite like winning the lottery,” says Vicky Kaspi, the McGill physics professor who oversaw the McGill Pulsar Group discovery. “There was no ‘Eureka!’ moment in this one… It was more like a gradual process of dispelling our collective skepticism and then a ‘Yeah, okay. This is the real thing.'”

“We believe that the matter in neutron stars is denser than an atomic nucleus, but it is unclear by how much,” he says. “Our observations of such a rapidly rotating star set a hard upper limit on its size, which tells us how dense the star can be.” Hessels and his colleagues presented their findings to a recent meeting of the American Astronomical Society in Washington, DC.

For more information on Vicky Kaspi and her work on pulsars, see Headway: www.mcgill.ca/headway/fall2005/indepth/