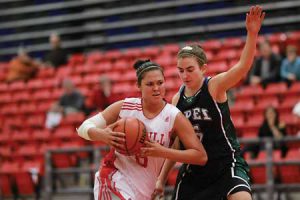 With a pair of wins over Concordia and UQAM last weekend, the basketball Martlets pushed their regular season record to 4-0, the team’s best start since it won the first 12 games of the 1996-97 season.

Leading the way for the Martlets was forward, Anneth Him-Lazarenko, who scored 37 points and pulled down 15 rebounds in the two wins. She was named both the McGill and De Facto Quebec female university athlete of the week for her efforts. The 5-foot-10, 23-year-old social science junior shot 59.3 per cent from the floor (16-for-27), was good on her only three-point attempt and went 4-for-5 from the foul-line. Him-Lazarenko, who joined the Martlets in 2008 out of Vanier College, registered a “double-double” in a 61-57 road victory over the Stingers last Friday with 27 points and 11 rebounds.

McGill’s male athlete of the week was Redmen basketball guard Simon Bibeau. A six-foot-two, 175-pound guard, Bibeau scored 40 points and was credited with six rebounds, four assists and three steals as the Redmen split their two games last weekend. The 19-year-old economics and finance freshman shot an impressive 56.5 per cent from the field (13/23), sank 5 of 10 shots from three-point range and made nine of 10 shots from the foul line. Bibeau scored 24 points in a 72-68 loss to No.6-ranked Concordia on Friday and added 16 more in a 78-67 victory over UQAM on Saturday.

The No. 1 McGill hockey Martlets (9-0) ended the fall semester with a perfect conference record, but not without surviving a scare for the second week in a row. Following a 4-0 shutout of Montreal (5-4-2) on Friday, last year’s national finalists needed a pair of shootout goals by all-Canadian forward Ann-Sophie Bettez on Saturday to edge Carleton (2-5-2) by a 2-1 score. The Martlets will now enjoy a break until the end of December, when they head to Winnipeg to take part in the Bison Hockey Holiday Classic.

The hockey Redmen, meanwhile, regained the No. 2 spot after a week spent at No. 3. Team captain Evan Vossen of Swift Current, Sask. notched the winner at 1:27 of overtime as the Redmen defeated the Guelph Gryphons 5-4 at McConnell Arena last Saturday.

With files from Earl Zukerman, McGill Athletics and Recreation.

Alex Cai to compete for Canada at Tokyo Olympics