A woman approaches the plaque on McTavish Street honouring the 14 women killed at École Polytechnique 30 years ago. She stands silently, head bowed, tears welling up in her eyes.

Bending down, she brushes off freshly fallen snow from the plaque with great care. Her hand pauses, resting there for a long moment.

It is a gesture repeated by a number of women who have waited silently in line for their turn to pay their respects. Gloved hands gently brushing away the snow, even when the snow is no longer there.

It’s the touch that is important.

This series of very personal moments marked the end of yesterday’s commemorative ceremony, attended by McGill students, staff and faculty, and members of the Montreal community.

“Thirty years ago today, at the École Polytechnic in Montreal, 14 women were murdered,” Principal Suzanne Fortier told the people gathered on the grey, sombre morning. “They were the target of this horrific and devastating act of violence because they were women. Their aspirations and dreams were killed.”

“These women were young and talented, with so much to give to the world,” said Fortier, standing with 14 current female undergraduate engineering students, each holding a single white rose. “The day shook profoundly our country and made us realize all we had to do more to keep our world and our country safe.”

Jim Nicell, Dean of the Faculty of Engineering, was doing his PhD in engineering at the University of Windsor on December 6, 1989. He told the crowd of his undergraduate class of 110 students only one was female. The loss of these 14 women has had a huge impact on the lives of their friends and families – but also upon the field of engineering.

“We need to recognize that we all lost something that terrible evening. We lost young people. We lost friends. We lost family members. But beyond this I think we also need to acknowledge that our losses don’t end there. We lost the unfulfilled potential of 14 women, so many in a field that has been – and is still – sorely lacking in gender diversity,” he said. “We in engineering need women. We need their views, their perspectives, their ideas. We, as purported problem solvers, need them to make us better.”

“Canada is still not a safe country for all women who live here. With women more likely than men to experience violence sometimes in their lives, usually before they’re 25,” said the assistant professor of Integrated Studies in Education. “For some women, those most marginalized, these risks are even greater. Societal and structural policies and programs continue, especially, to harm single women, women with disabilities, trans women, Indigenous women, immigrant, refugee and racialized women.”

“We call upon our communities to recommit to ensuring that the deaths at École Polytechnique were not in vain,” Gonsalves said. “As we mourn these deaths, as well as the women murdered or abused since then, we need to commit to work for gender equality, for policies that lead to gender equity, and to an end to structural and individual violence against all people who face gender-based oppression.

Diana Serra, Co-President of Promoting Opportunities for Women in Engineering (POWE) and a fourth-year software engineering student, was the final speaker.

“These 14 women weren’t doing anything fantastical or inherently dangerous, they were just going to class,” said Serra. “I point this out because I can’t imagine that when they walked into class that day they were thinking about how brave they were being or how heroic it was to be a woman in engineering. They were likely thinking of when their next assignment was due or maybe a funny story of their friend had told him the night before.”

“It is important on a day like this that we remember the work that needs to be done on the prevalence of gender-based violence in our world today. But it is equally important that we look to a brighter future,” said Serra. “Our society has a great potential for change and we see it in amazing movements like #MeToo; and in how women and gender minorities are more open than ever about their experiences; and in men taking their place as allies beside these women. I see a future where women don’t just go into engineering, they belong there.” 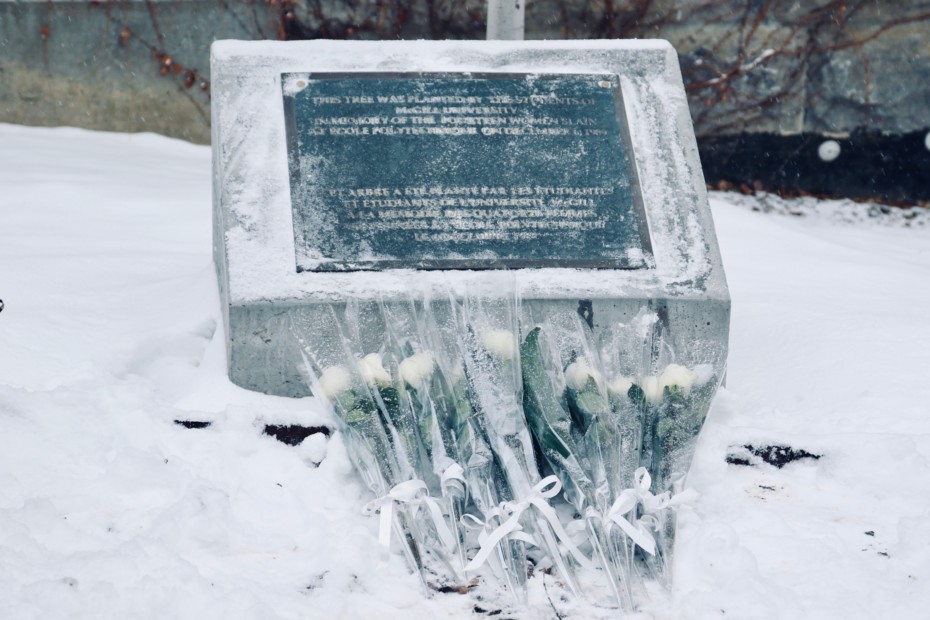 We must always remember