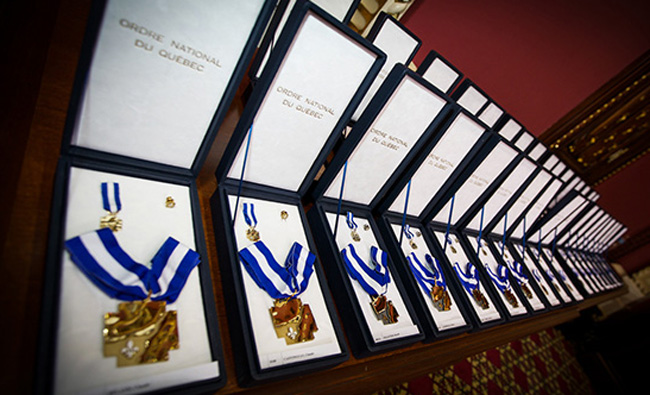 On June 22, seven members of the McGill community were among the 34 new appointments to the National Order of Quebec, the province’s highest civilian honour.

“The National Order of Quebec gives us the opportunity to highlight the achievements of remarkable Quebecers,” said Premier Philippe Couillard at the announcement earlier this month. “Each one of these exceptional men and women are leaders in their respective fields. It seems to me that it is entirely appropriate – even necessary – that we express our gratitude to them for their respective contributions to the advancement of our society.”

Justice Louise Otis, an adjunct professor of law at McGill, was promoted to Grand Officer – the highest rank of the Order. A former Justice of the Quebec Court of Appeal, Otis regularly participates in international governance and justice reform missions with the United Nations, International Monetary Fund and the World Bank.

Two McGill alumni were appointed Officers of the Order, including John Parisella (MA’71, DipEd’73), who served as chief of staff to former premiers Robert Bourassa and Daniel Johnson; and Serge Bouchard (PhD’81), renowned anthropologist, broadcaster, author and a tireless observer of Quebec society.

Included among the 20 new Knights of the Order are four McGillians. These new members include faculty members Gerald Batist (MDCM’77), clinical oncologist, Director of the Segal Cancer Centre and a pioneer in the field of personalized medicine; and Desautels Faculty of Management professor Alain Pinsonneault, a world-renowned researcher in Information Systems. As well, a pair of alumni were also appointed as Knights of the Order, including Laure Waridel (BA’96,), co-founder of Équiterre, an environmental organization; and physicist Yves Sirois (PhD’88), a key player in the discovery of the Higgs boson particle.

Read the June 14 press release, including the list and biographies of all new appointees.

Morag Park named to the Order of Quebec