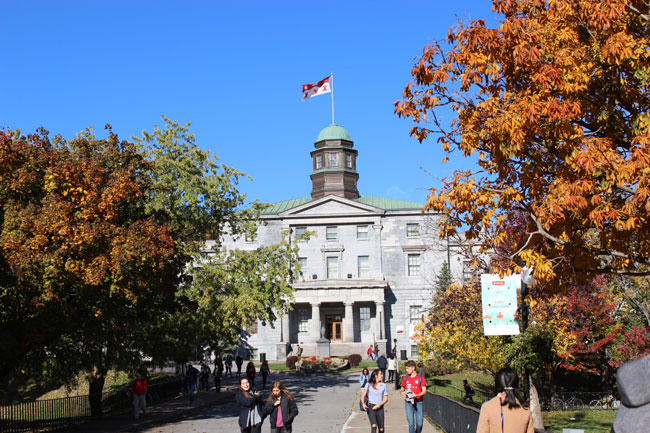 McGill’s Board of Governors followed  Senate in unanimously passing the University’s Policy against Sexual Violence at its meeting of Thursday, Dec. 1.

PGSS Senator Victor Frankel noted that the development of the Policy, which has been more than two years in the making, “has been led by students and is survivor-focused.

“It helps mobilize University resources to support people who have been affected by this,” he said. “Students and other community members who worked on this are very proud.”

At its meeting of Wednesday, Nov. 23,  a prolonged burst of applause followed a unanimous vote in favour of the Policy against Sexual Violence.

At that meeting, Principal Suzanne Fortier thanked those who had worked over the years to bring the Policy forward. “A lot of important work and discussions have taken place respectfully on our campus,” she said. It’s a great moment for all of us as a community. Thank you very much!”

“I am delighted at the level of support we saw in Senate today,” Provost and Vice-Principal (Academic) Christopher Manfredi said following the meeting. “This has not always been an easy process, but McGill is showing leadership by tackling a tough issue. I am very proud of all of those who worked hard to bring this Policy forward. Ours is a progressive and vigorous Policy. We have done good work.”

As he has previously, Manfredi singled out members of the Student Working Group that, over the past couple of years, laid down the foundations of the Policy. “We are extremely grateful for the significant efforts they made,” Manfredi said.

In a letter contained in Appendix 1 of materials provided to Senate, both Manfredi and Angela Campbell, Associate Provost (Policies, Procedures and Equity) laid out the raison d’être for the new policy.

“McGill University recognizes that it can and must do better to address the realities of campus sexual violence. Indeed, McGill wants to do better on this front. The University’s Policy against Sexual Violence marks a first, crucial step toward realizing our institutional commitment to developing stronger, more effective strategies for supporting survivors and for preventing and responding to sexual violence.”

Angela Yu, the Equity and Diversity Commissioner for McGill’s Post-Graduate Students’ Society (PGSS), who has worked on draft, said in an interview she is cautiously optimistic the Policy will be embraced and will do its job.

“I think the Policy has moved a long way from what the administration wrote in May,” she said in an interview. “This happened because of the focus groups held by PGSS and SSMU (Student Society of McGill University), which heard from survivors who showed where the gaps were in McGill’s system. I think the relationship between the administration and the students working on the Policy has also shifted.”

Yu noted improvements in the area of intersectionality (so that the Policy acknowledges explicitly the possible impact of factors such as racial, religious, gender and sexual identity on experiences of Sexual Violence) and in terms of resources that the University has committed to sexual violence prevention and response.

She remains aware, however, that some in the McGill community are concerned that the Policy doesn’t do enough to deal with the perpetrators of assault. “A lot of folks have expressed scepticism,” she said.

The administration insists that providing robust support for survivors can be harmonized with accountable and fair disciplinary processes. “Our commitment to supporting survivors, no matter when or where an incident occurs, coexists with our commitment to procedural fairness in University policies and procedures. That view is a cornerstone of this Policy,” Campbell said.

“We absolutely need to support survivors, whether or not they wish to initiate a disciplinary process within the University or report the incident to police. The Policy commits to the respectful, confidential and dignified treatment of survivors who disclose an experience of sexual violence. The Policy further obliges the University to develop a rigorous education plan that will reach all corners of our campus, with a view to raising awareness about sexual violence and its impacts, while also seeking to reduce incidents.”

Manfredi noted at Senate that the Policy “has built into it a very robust review process… I think that’s a very important part of the Policy.”

There was almost no discussion. Deputy Provost (Student Life and Learning) Ollivier Dyens proclaimed himself strongly in favour. “This Policy does everything that needs to be done,” he said, noting its support for survivors and commitment to allocating more resources.

“This policy is the first step. The next step is for all of us to commit to addressing this problem. A policy is a tool but we need to commit, all of us, to remain cognizant of the issue and the need to remain vigilant going forward.”

Manfredi had made two commitments at Senate last April: that a policy would be ready for approval before the end of the calendar year and that additional resources would be allocated to dealing with sexual assault.

The University is in the process of hiring a second person, who will work as a Sexual Violence Response Advisor alongside Harm Reduction Co-ordinator Bianca Tétrault. The two will share discreet, accessible office space at 550 Sherbrooke St. W., Suite 585, West Tower.

Both Campbell and Manfredi underline that a policy on its own will not do all the work required to reduce the incidence of sexual violence in a community the size of McGill. But it will provide clear guidelines for those supporting survivors, something Yu said is crucial.

“It’s really important to have these clear procedures,” she said.

The materials provided to Senate explained the extensive consultation process that led to the final version of the Policy.

“Throughout the Policy’s development, we have listened actively to members of the University community and heard diverse views about how McGill can and should address the challenge of campus sexual violence. Our consultations aimed to ensure survivor-informed discussions, and included:

Checking in with the Office for Mediation and Reporting