David R. Colman, director of the Montreal Neurological Institute and Hospital, passed away unexpectedly on June 1, 2011. His many friends and colleagues were shocked and saddened by this tremendous loss. 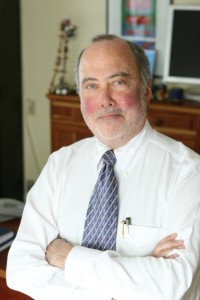 Liliana Pedraza worked closely with David Colman for 18 years, first as a postdoctoral fellow in his Mount Sinai School of Medicine lab. In 2003, she joined him when he moved to the Neuro, where she is an assistant professor specializing in neural-glial interactions. Here she reflects on her dear friend and mentor.

I would have followed Dave to the end of the world. When we first met, I was at a difficult time in my life and career. I had just finished a post-doc at NYU and was supposed to go back to my home in Argentina, where I held a position at my university. Last-minute changes in my husband’s career plans meant staying in New York and, of course, finding a job. I had a newborn baby, my working permit had expired, and I was in Manhattan, where people work crazy hours, and my work hours were limited — so my chances were very narrow for finding a second post-doc. But, even though we’d only met a few times at conferences, Dave had faith in me.

Since then, I’ve been unconditionally by his side. When he moved to the Neuro, I had good options to keep working in New York. But I couldn’t see not working with Dave: He was the kind of person you’d be fortunate to come across just once in your lifetime.

There are many good scientists. But brilliant is something else, and Dave was brilliant. Part of it was his curiosity. I was always amazed at his knowledge of everything. He could talk about ancient Greece, philosophy, mythology, astronomy, music, Shakespeare… He could talk about any possible thing and transmit his knowledge like it was the most natural thing. He wasn’t a show-off. He was just interested in the world.

That enthusiasm transformed me. My PhD is in biochemistry, but joining Dave’s lab turned me into more of a cell biologist. Biochemists break everything apart — we do subfractionations of different parts of a cell, run gels, look at what proteins are here and there — but Dave wanted to keep things intact and watch what was happening. It’s one thing to look at static images of central nervous system tissue under a microscope, but he really wanted to see the event as it developed in real time. One time in the mid-90s, Dave came back from a symposium where someone presented on fluorescent protein technology, which was brand new at the time. He was so excited because he immediately envisioned a tool that would permit us to be a voyeur, to spy on the secret life of a cell while it’s happening. Making myelin proteins fluorescent ended up opening yet another chapter of the story of the Colman lab.

Dave could see beyond what everyone else was seeing— and, for me, that’s what distinguishes a real genius. We had a postdoc, Allison Fannon, who was trying to figure out the arrangement of cadherin-mediated adherent junctions in the central nervous system. She’d already published a beautiful paper on cadherins in the peripheral nervous system myelin, but now she was struggling because the structures are smaller, and therefore harder to visualize, in the central nervous system. Allison thought her images weren’t good because they were covered with a dot pattern. We were all looking in the microscope, but it was Dave who realized that what Allison was seeing, without realizing she was seeing it, were synapses — and this was another huge contribution of the Colman lab, that cadherins mediate synaptic junction adhesion.

Dave was the type of person who always made you feel like you have value, that what you were doing was important. He was proud of everyone’s work in the lab, and he always made it clear how much he valued the team. One time, at a conference, he presented data I had collected regarding axo-glial interactions. People were really excited about it. Someone asked, “What microscope are you using to get such beautiful pictures?” Dave said, “It’s not the microscope, it’s the person behind it. Liliana is a virtuoso. When she’s operating a microscope, every confocal becomes a Stradivarius.” I wish he had put that in writing! I don’t think anyone will ever appreciate my work in that way again.

I keep his photo on my computer desktop. When I look at the eyes, that was Dave. His smile always started with his eyes, with that mischievous expression.

Every time we had a one-to-one meeting, we’d spend the first few minutes talking about the research and then start talking about something else. And it was always so interesting, sparking unexpected new ideas, that I never wanted that time to be over.

For 18 years, we had so much fun. We spent our lives at the microscope, night and day, and it was fantastic. Life after Dave. I still can’t think about it.