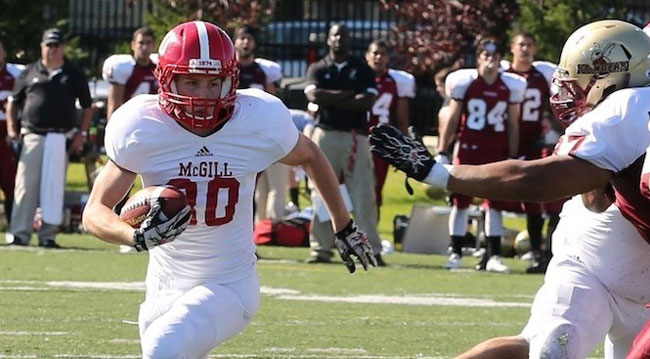 The McGill Redmen have embarked upon their 135th season of football and will officially open the campaign with their league home opener against Bishop’s on Friday, Sept. 4, at 7 p.m. This year also marks the centennial for Percival Molson Memorial Stadium, which opened on Oct. 22, 1915, with an intercollegiate track & field meet. The event will be celebrated as part of the McGill Homecoming game versus Concordia on Oct. 24.

The Redmen are coming off a disappointing 0-8 last-place finish in the tough six-team Réseau du sport étudiant du Québec conference, which has produced the Vanier Cup national champion in eight of the last 12 seasons. Recently-appointed head coach and defensive coordinator Ronald Hilaire has had a fruitful recruiting year with 35 freshmen in camp. His opening-day roster will feature 40 returnees including six seniors, 18 juniors and 16 sophomores.

“We have a young committed team, improved our talent base, strength and conditioning and had a solid recruiting year, so I am expecting this group to be very much in contention for a playoff berth,” says Coach Hilaire, who took over as co-head coach on Sept. 30, last season when Clint Uttley stepped down.

The offensive side of McGill’s game in 2015 is expected to have a new look under the guidance of first-year offensive coordinator Benoit Groulx, who will utilize his experience as a two-time Vanier Cup champion quarterback with Laval.  A veteran offensive line is in place to protect the quarterback, in addition to 2013 all-conference running back Luis Guimont-Mota and veteran receivers Louis Brouillette and Yannick Langelier-Vanasse.

The battle for the starting role at QB will be an interesting one with Joel Houle, Nicolas English and Matthew Mannarino all in the mix. Houle, a six-foot, 228-pound sophomore from Chateauguay, Que., became a starter in his freshman year and completed 95 of 190 attempts (50.0%) for 1,072 yards, one touchdown and six interceptions. He has also rushed 29 times for 116 yards, a 4.0 average and a pair of TDs.

Pacing the running attack is the aforementioned Guimont-Mota, a shifty, 5-foot-8, 191-pound senior from Quebec City, who played in the 2015 CIS East-West Bowl and is expected to have a bounce-back year after only suiting up for three games last season. In his freshman campaign, he led the conference in rushing with 824 yards on 147 carries, a 5.6 average and four TDs. Expected to join him in the starting backfield is freshman Mike Lusikila, a 5-foot-11, 199-pound product of College du Vieux-Montreal who rushed 136 times for 638 yards and five TDs.

Among the receiving corps, Brouillette, a six-foot, 187-pound wide-out from Sherbrooke, led the McGill pass-catchers last year with 33 receptions for 377 yards and one TD in only six games. He was one of five Redmen picked to played in the East-West Bowl last June.

Langelier-Vanasse, a 5-foot-8, 185-pound senior from Lachine, Que., possess explosive speed and also poses a double-threat as return specialist. Last year, he led the Redmen in all-purpose yards with 579 for an average of 72.4 per outing. He collected 218 yards in the air, 236 on punt returns and 125 on kickoff runbacks.

A pair of freshmen vying for the starting role at tight end are Jose Rodriguez (6-2, 213) out of Vanier College and Malik Gagnon (6-2, 200) from College de Rimouski.

The kicking game will be handled by newcomer Justin Lavallee, a native of Ile-Bizard, Que., who has transferred from the Ottawa Gee-Gees after previously playing for John Abbott College.

The linebacking corps will be anchored by sophomore Karl Forgues (5-9, 188; OLB), who was recently named by InstantScouting.com as a preseason all-Canadian after meriting the RSEQ conference’s defensive rookie-of-the-year honours in 2014. He led the league with 74.5 tackles in eight games last year, including eight QB sacks. Forgues added an interception, three knockdowns and a pair of forced fumbles. Also returning is sophomore Eric Gracioppo (6-2, 234; MLB; 19.5 tackles; 2 FF) and sophomoreAnthony Couturier-Lagace (5-10, 204; OLB; 16.5 tackles, 1 KD). A freshman to watch out for is Dane Wagner (6-1, 228) an American import from Niceville, Fla., who played at Phillips Academy in Andover, Mass.