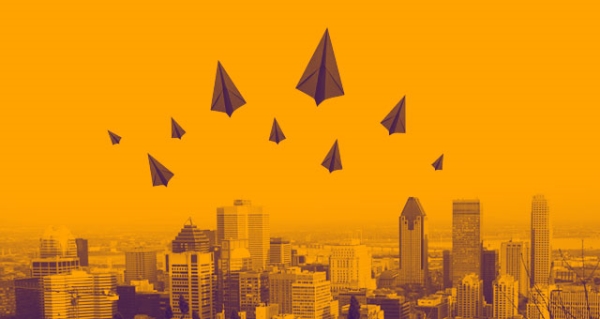 … right in my backyard. Students and professors at McGill are exploring different forms of research and community collaboration, with some unusual results.//

A neighborhood with a rich artistic, cultural and industrial heritage, now in transition.

Combine and stir and what you get is a living laboratory for some of the most innovative ideas in the country.

Across McGill, professors are transforming their research into products with real-world applications while the QI Student Working Group has allowed McGill’s greatest asset — its students — to get directly involved in the project’s educational and entrepreneurial activities.

By encouraging an exchange of knowledge between students, professors and the community, the QI provides a bustling meeting space for academic and urban ideas alike, from green-minded enterprises to cultural rejuvenation initiatives.

As a result, the QI area, located a 20-minute walk from McGill in the city’s southwest sector, is home to a growing array of projects and plans that are changing the face of Montreal.

A SAMPLING OF QI INITIATIVES: 001// BRINGING RESEARCH TO MARKET

Renzo Cecere regularly performs cardiac surgery to repair patients’ mitral valves, which control the fl ow of blood in the heart. The operation is common but risky and typically involves placing a ring around the mitral annulus to stop the valve from regurgitating blood. Because it requires opening the — often elderly — patient’s chest and heart, the procedure comes with a risk of complications such as infection or stroke and recovery time can take weeks.

Two years ago, Cecere, a surgeon at the Royal Victoria and Montreal Children’s Hospitals and an associate professor of surgery at McGill, sought to address the challenges of mitral valve surgery using a percutaneous (literally, from the Latin for “by way of the skin”) approach. Instead of opening the heart, Cecere aimed to reach the mitral valve by simply piercing through the skin above it. He developed an implant that could be folded, loaded onto the tip of a catheter and then passed through the blood vessels to the heart.

Cecere created a prototype but knew that the as-yet unproven project would have been a difficult sell to venture capitalists. Instead, the prospect of office space and access to experts from various fields — engineers, clinicians and others — drew him to speak with the McGill QI team, who referred him to Centech. A QI incubator affiliated with ÉTS that, in December 2012, began accepting applications from McGill, Centech also offers its new entrepreneurs up to $150,000 per project through its $1 million protyping fund.

This collaboration was an ideal opportunity for Cecere, who is now looking to run preliminary tests on his invention in a lab before implanting it in animals. After he proves the device’s feasibility, he will seek out venture capital to help him bring it to market, with support from Centech throughout the process. “Mitral valve surgery works well, but the patient needs to survive it in order to benefit,” he says, matter-of-fact. “If we could offer an alternative, we could have a big effect on society.”

When Professor Will Straw, the chair of McGill’s Department of Art History and Communication Studies, heard about the Quartier de l’innovation, a question came to mind: “Do the principal stakeholders know that Griffintown [one of the QI neighbourhoods] is a major part of Montreal’s up-and-coming arts culture?”

Straw’s initial thought led him to accept the invitation to undertake an in-depth study on Griffintown’s growing arts sector. With the help of some of his students, he interviewed more than 30 members of the area’s arts community. He discovered, among other things, that while there were many performance and exhibition venues in the neighbourhood, there was a dearth of public spaces in which artists and residents could discuss the changes the once-industrial neighbourhood is undergoing. And he saw an opportunity for McGill.

“I thought, “Why not create a space where we could take some of the University’s activities and where we could showcase what’s going on in the neighbourhood?”” Straw says.

Thus was born the Laboratory of Urban Culture, a project that would support both the arts scene and urbanism in the neighbourhoods that constitute the QI. Straw hopes to establish a semi-permanent space for displaying artwork held by McGill and an exhibition space where students can collaborate with local artists, along with an Urban Research Laboratory focused on fostering discussions about the neighbourhood.

A pop-up or temporary installation — most likely at the St. Joseph Church in Little Burgundy — will give the Laboratory a chance to test out a few ideas. “It’s kind of funky and contemporary as an idea,” Straw says. “We can program everything from talks to exhibits to debates and cultural evenings.”

And though he recognizes that McGill’s presence may signal further gentrification to some, he hopes it’s seen as an effort to preserve some of what makes the area special. He is also excited for the University community to get to know the neighbourhood and its residents.

“We have to get out of Fortress McGill,” he says. “I think we can only benefit from bringing students and faculty to Griffintown.”

To Don Smith, the idea of sustainable fuel simply makes sense. But the James McGill Professor of Plant Science knows that making this fuel from starch crops like corn and sugarcane — which, thanks to climate change, are becoming more challenging to cultivate — is probably an unsustainable proposition.

As the CEO and scientific director of BioFuelNet Canada, a research network focused on creating advanced biofuels, he’s leading a team that’s developing efficient means of converting materials into the combustibles that keep vehicles running. These materials include algae, agricultural and forestry waste, non-food crops produced on lands not very suitable for the production of food crops and municipal waste.

Last year, BioFuelNet — which draws on the expertise of 74 researchers from 25 postsecondary institutions — became the first McGill project to set up shop in the Quartier de l’innovation. The area proved an ideal one in which to do business.

“A short distance from us are the offices of Écotech Québec, a clean technology organization,” Smith says. “There are also a number of venture capital groups that are focused on renewable energy nearby.”

BioFuelNet has received $5 million a year for five years in funding from the Government of Canada’s Networks of Centres of Excellence program, along with $7 million per year more from other partners. It has already struck deals with Airbus and Air Canada, both of which are keen to see the next generation of aviation biofuels arrive in the marketplace.

“There are other power options for surface vehicles — electricity, for instance — but those options don’t exist for the aerospace sector, which wants to reduce its large carbon footprint.”

Smith, whose work focuses on plant-microbe interactions, also wants to introduce more students to this area of investigation. He has enlisted their help to identify bacterial compounds that may help biofuel crops flourish, particularly under the demanding conditions of marginal lands and increasingly extreme climate conditions.

“You could do this kind of fuel production right now,” Smith says, “but the technology will improve, and it will become continuously more attractive for industry.”

Over the past decade, Griffintown and its surroundings have transformed from a largely industrial neighbourhood to one of Montreal’s most coveted stretches of urban real estate.

Raphaël Fischler, the director of McGill’s School of Urban Planning, watched the city’s creative class stake its claim to the area before the major land developers followed suit. The threat of streets lined with condos and big-box retailers has Fischler concerned.

So when the prospect of the Quartier de l’innovation emerged, he was quick to propose a project that would make sense of the neighbourhood’s breakneck evolution and offer informed suggestions for its continued growth: the Urban Microcosm Experiment.

In the case of the Urban Microcosm, that applied research includes investigating innovative policies and designs in other cities and seeing what the QI can learn from them. For example, QI has opened the door for students to work with the City of Montreal on studying and developing urban sustainability and quality of life indicators for Montreal and the QI area. Right now, the student-researchers are preparing to take their work to the neighbourhood.

Lora Milusheva, a master’s candidate, is among the students creating a literature review on models for measuring energy use. “We are looking for case studies to see what has been done elsewhere and what may be relevant to the QI,” she says. “We would like to be able to suggest ways to make the district more efficient in terms of its use of energy.”

Fischler sees further potential in the initiative. The Faculty of Education is working with Montreal’s English- and French-language school boards to establish a new bilingual school in Griffintown, an idea that Fischler says will add another social dimension to the neighbourhood. And this winter, in conjunction with McGill’s Office of Student Life and Learning, he is looking at the possibility of building student residences in the area. “We would really like to make the residences part of the QI, with students being directly involved in research activities,” he says. The idea may never come to fruition, but people should know what’s possible for the landscape, Fischler explains. “We must always welcome experimentation.” ■

FOR MORE INFORMATION ABOUT THE QUARTIER DE L’INNOVATION

For new updates about the initiative, visit publications.mcgill.ca/headway/tag/QI/