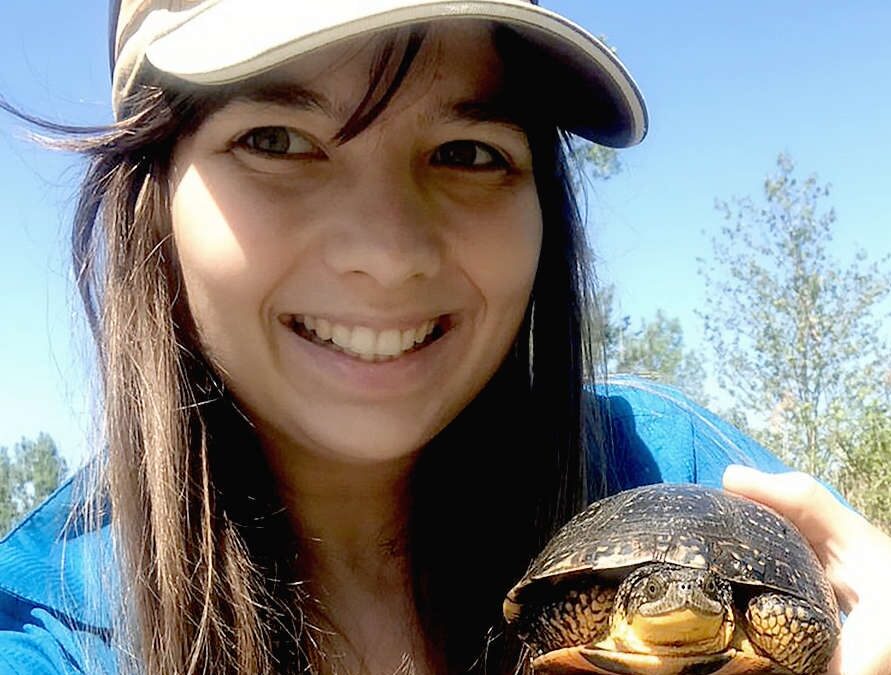 For biologist Jessica Ford, pursuing a lifelong interest in herpetology – the study of amphibians and reptiles or, as Ford puts it, “things that live in the mud” – hasn’t always been easy.

“There’s very little that makes you feel so much like you can’t do something as someone explicitly telling you that you should reconsider.”

But far from being deterred from following a path she was told was “weird for a girl,” Ford leaned in. She’s now a PhD student at the Redpath Museum, studying the effect of toad tadpoles on their aquatic ecosystems. She also serves as chair of STEMM diversity @ McGill, a group she helped found as an undergraduate student in 2017, which is devoted to promoting diversity in STEMM (science, technology, engineering, mathematics and medicine), and providing resources to young women and girls considering careers in those traditionally male-dominated fields.

Found her passion in childhood

Like many young children, Ford spent lots of time playing in mud and dirt. She quickly became fascinated with the animal life she encountered, becoming curious about those animals and their environments. That fascination grew into a passion for ecology and conservation, though as a child, she didn’t understand that her curiosity counted as science.

“I never saw anyone represented in science who I could relate to, and didn’t realize scientists could be emotional or creative,” Ford recalls.

Around that time, Ford began to hear the derisive comments about girls taking an interest in science,  which persisted in one form or another throughout her life.

“I could tell that I was being treated differently,” she says. “In elementary school, no one was calling the boys weird for being interested in the ‘creepy crawlies.’ In high school, my male peers could ask for help without being told maybe they should reconsider their scientific pursuits, or that they wouldn’t make it in science if they were so emotional.”

Eventually, she was able to overcome the negativity around her because of her passion, her stubbornness, and her support network of family, friends and mentors.

“I had decided at a young age that studying and conserving reptiles and amphibians this was something I cared about, and I wasn’t going to let anything stand in my way,” Ford says. “I would motivate myself by proving people wrong and showing them that I really could do all these things they would say I couldn’t.”

“You can have a place here, too”

During her first semester as an undergraduate, she found out to her frustration that after all the hurdles and the pushback she overcame to make it into university, the dismissive comments persisted.

“I worked up the courage to ask a professor a question after class, which I was pretty nervous about,” Ford says. “After the professor finished answering a classmate’s question, I asked him mine, and instead of an answer, I was treated to ‘Well, if you don’t understand that, you really shouldn’t be in science.’

“At the moment I cried, as people do, but I decided to channel my frustration and try to make a difference, so that others wouldn’t have to overcome so much to get to where I was.”

That incident was a catalyst which persuaded her to join forces with Charles Xu, a graduate student who was looking for ways to draw attention to issues of equality, diversity and inclusion in scientific fields, to create STEMM Diversity @ McGill. One of her first initiatives as part of the group was to write and illustrate a colouring and activity book for kids, to introduce young children to scientists from underrepresented backgrounds who have made significant contributions in STEMM fields – something Ford wishes she was exposed to when she was a child.

“Something I find really empowering is finding someone who reminds me of me – someone I can identify with who is doing what I want to do,” she says. “[I wanted to offer kids] something that really spoke to them and explained there’s lots of people who do science. We all look different, and you can have a place here, too.”

She also helped create a mentorship program for university students, and has given outreach talks to schools, libraries, and the Girl Guides of Canada.

Ford also acknowledges that while she has overcome many obstacles during her journey, she recognizes the advantage she has of being a white woman.

“I think it is important to remember just how much harder this is for BIPOC, queer, disabled, and any intersectionality of that, women. It is also important to remember those that were pushed out and excluded from pursuing their dreams in STEMM. We all have a place in this fight for a better STEMM community, and need to ensure that the future of STEMM is a just one.”

February 11: International Day of Women and Girls in...