Summer Arctic sea-ice is predicted to disappear before 2050, resulting in devastating consequences for the Arctic ecosystem. The efficacy of climate-protection measures will determine how often and for how long. These are the results of a new study involving 21 research institutes from around the world, including McGill University. 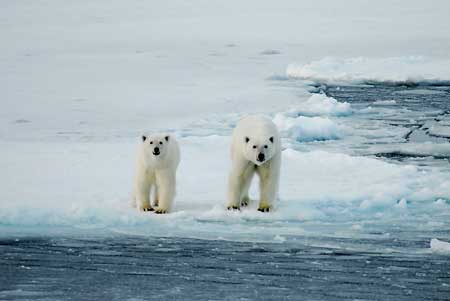 The North Pole is presently covered by sea-ice all year. Each summer, the area of sea-ice coverage decreases and grows again in winter. However, as a result of global warming, the overall area of the Arctic Ocean covered by sea-ice has reduced rapidly over the past few decades. According to the researchers, this substantially affects the Arctic ecosystem and climate. The sea-ice cover is a hunting ground and habitat for polar bears and seals and keeps the Arctic cool by reflecting sunlight.

“While the Arctic sea-ice extent is decreasing during this transition to an ice-free Arctic, the year-to-year variability in extent greatly increases, making life more difficult for local populations and ice-dependent species,” says co-author Bruno Tremblay, Associate Professor in the Department of Atmospheric and Oceanic Sciences at McGill.

The study published in Geophysical Research Letters analyzed recent results from 40 different climate models. Using these models, the researchers assessed the evolution of Arctic sea-ice cover in a scenario with high CO2 emissions and little climate protection. As expected, summer Arctic sea-ice disappeared quickly in these simulations. Surprisingly, they also found that ice disappeared in some simulations where CO2 emissions were rapidly reduced.

From zooplankton to coastal communities: Understanding the changes affecting...