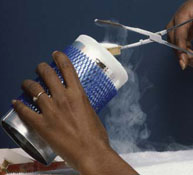 A new technique may improve the chances for women with cancer or ovarian disease to become mothers. At the 2007 meeting of the European Society of Human Reproduction and Embryology, Drs. Hananel Holzer, Ri-Cheng Chian and Seang Lin Tan from the McGill Reproductive Centre announced the birth of the first baby born from an egg matured and frozen in a test tube.

Twenty patients with polycystic ovarian syndrome (PCOS) underwent the IVF process at the McGill University Health Centre’s Royal Victoria Hospital. PCOS is a hormone disorder that affects one in 10 women of childbearing age and is a leading cause of infertility.

Live births from frozen eggs aren’t new. The McGill Reproductive Centre announced the first such birth in 2005; an egg which had already matured inside the ovary was removed, then frozen. The ovarian stimulation required for egg maturation, however, carries potentially serious side effects, especially for women with PCOS, making this new technique a significant breakthrough. The process may also be appropriate for patients who wish to preserve their fertility, but don’t have time in the menstrual cycle to produce mature eggs before beginning cancer treatment or hormone stimulation is contra-indicated.