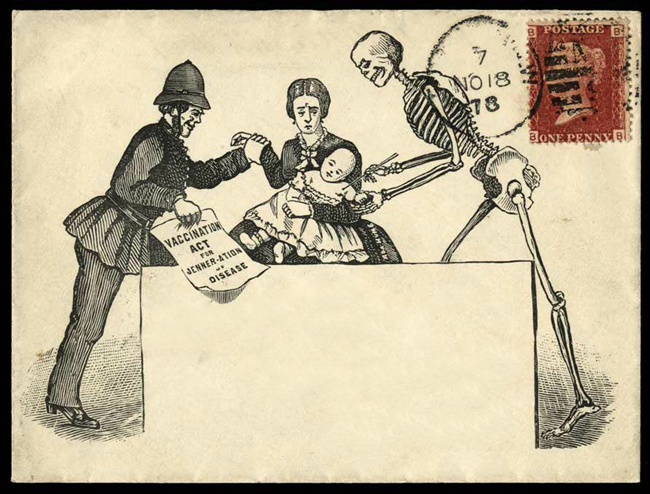 It is hard to understand the fear and loathing smallpox created in the population. It killed millions of people, including several terrible outbreaks in Montreal, before it was completely eradicated in 1979.

The historian T.B. Macaulay described smallpox as being “always present, filling the churchyard with corpses, tormenting with constant fear all whom it had not yet stricken, leaving on those whose lives it spared the hideous traces of its power…”

A new exhibition at the McLennan Library entitled Vaccinations, Fame, Fear and Controversy 1798-1998 explores the history of vaccinations. ‘Fame’ refers to the inventor of the smallpox vaccine, Edward Jenner; the ‘fear’ is the doubts some have about vaccines; and the ‘controversy’ is the debate about vaccines and the vindication of the medical-scientific view.

“Since Edward Jenner first published a way to prevent smallpox in 1798, advocates of vaccination have met with strident criticism,” says Cynthia Tang, Osler Library Research Associate, a PhD Candidate in the Department of History and Classical Studies and co-curator of the exhibition. “We explore resistance to the vaccine, analyzing the fears and doubts of anti-vaccinationists; and the successes and failures of vaccination’s proponents in addressing those fears and doubts. The contemporary rhetoric surrounding vaccination is implicitly connected to, and draws upon, two centuries of rehearsal. Recognizing the essential structure of anti-vaccinationist arguments in particular may provide new ways to address them.”

In the 18th century, Edward Jenner noticed that dairy maids who developed what was called cowpox were immune to smallpox. Jenner published the first scientific article about vaccinating children against smallpox. He was immediately attacked by the medical establishment.

The other curator of the exhibition Rob Boddice, visiting scholar from the Free University of Berlin, wrote a biography of Edward Jenner. “We aim to show that the structure of arguments against vaccination have not really changed since the first vaccine. While giving no quarter to the anti-vaccine lobby, we aim to show that medical science has often not been particularly good at allaying fears, which have on occasion had some justification,” says Boddice. By taking a long historical view, we offer a new kind of space for personal reflection on the merits of vaccination, understood through one of the greatest medical success stories: the eradication of smallpox.”

Many of the items on display are from The Osler Library for the History of Medicine which has an extensive collection of articles and books on the debate around vaccines. Osler, considered to be one of the greatest physicians of all time, was a great admirer of Jenner. Osler received his medical degree from McGill in 1872 and left one of the most important collections on medical history in North America to McGill.

Smallpox was finally eradicated in 1979 by a vigorous vaccination campaign in S. America, Africa and Asia, carried out by the World Health Organization. Smallpox is the first major disease to be wiped out by public-health measures.

After its run at McGill the vaccine exhibition Vaccination: Fame, Fear, Controversy 1798-1998 will run until March 23. The vernissage will take place on Feb. 6. Get more information.

Read the post written by Cynthia Tan for the Canada Science and Technology Museum’s blog.