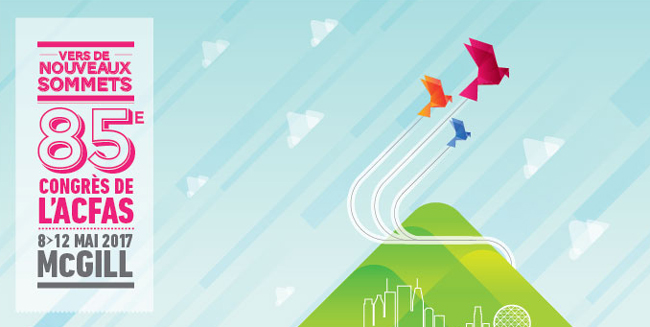 With the dust still settling following the end of the Acfas (Association Francophone Pour Le Savoir) conference, held at McGill from May 8-12, the numbers speak to the event’s success. The annual congress, the largest scientific event in the French-speaking academic world, drew some 6,000 attendees from 40 countries and included 3,400 scientific papers in more than 200 seminars in 30 fields of research. As well, the 11 public events under the “Science moi!” banner attracted more than 1,000 people.

“We are so proud of the success of this year’s Congress,” said Allison Flynn, McGill’s Congress Director. “Coordinating an event of this size at McGill can be pretty complex, and this year’s ongoing construction projects added an extra layer of complexity. But so many people – from dozens of units across campus – contributed to this colossal team effort. It all really came together in the end.”

That team effort included coordinating the use of approximately 100 rooms in some 20 buildings on the downtown campus. More than 100 volunteers from the McGill community helped keep the event running smoothly, doing everything from working as guides and managing information booths to supporting classroom AV/IT.

Acfas prioritizes the work of young researchers, giving them an opportunity to build up their communication skills and CVs. The 240 McGill staff and students who presented in various forums were from a wide cross section of disciplines.

Principal Suzanne Fortier pointed out that holding a conference of this calibre on campus permits organizers to avoid the high cost of booking a commercial conference venue. Those savings are passed on to young researchers and students, allowing them to attend at a lower cost. Prof. Fortier also told Montreal’s Le Devoir newspaper that French is more and more prevalent at McGill, with roughly 60 per cent of those on campus – students and employees – able to converse in French. “We encourage our students to use their time at McGill to learn French. French language culture is a big asset which draws people to Montreal and to McGill.”

Acfas received ample media coverage. Some 70 accredited journalists attended the Congress, generating more than 350 articles and news items. Le Devoir published a special Acfas supplement and Radio-Canada organized “La semaine des sciences.” Many of those who presented at the conference were asked to do interviews about their work on the radio and television.

#Acfas trended on Twitter in Montreal, and exceeded 12,000 “likes” on its FB fan page.