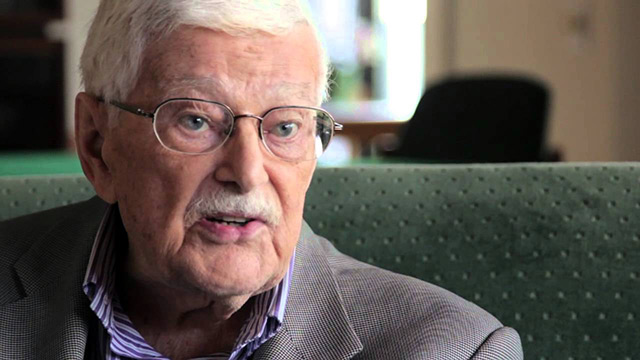 Widely considered one of the key architects of Quebec’s major education reform that took place during the Quiet Revolution, the Honorable Paul Gérin-Lajoie, C.C., G.O.Q., L.L.D. honoris causa,  died on June 25 in Montreal. He was 98.

On Thursday, August 9, 2018, McGill will lower the University flag atop the Arts Building to mark Gérin-Lajoie’s state funeral. Principal and Vice-Chancellor Suzanne Fortier will attend the service, which will be held at Montreal’s Mary Queen of the World Cathedral.

Paul Gérin-Lajoie was born in 1920 in Montreal. He studied at Collège Jean-de-Brébeuf and Université de Montréal, and, in 1945, was one of the first Quebec-born students to earn a Rhodes Scholarship.

In 1960, he was elected as a Liberal Member of the Legislative Assembly for the riding of Vaudreuil-Soulanges. Under Premier Jean Lesage, he served as Minister of Youth from 1960 to 1964. It was in this role that Gérin-Lajoie tasked Alphonse-Marie Parent with surveying the state of education in Quebec, to determine why fewer than half of Quebec students stayed in school past Grade 6. To implement the Parent Commission’s recommendations, Premier Lesage appointed Gérin-Lajoie Quebec’s first Minister of Education, a position he would hold until the Liberals lost the 1966 election. Gérin-Lajoie’s drive to modernize Quebec’s education system built up momentum that would continue through three years as a member of the opposition, a period that saw the creation of the CEGEP and Université du Québec systems.

“One of the reasons Quebec has become as modern as it is today is because of men like Gérin-Lajoie,” said Quebec Premier Philippe Couillard when he announced the state funeral. Couillard credited Gérin-Lajoie with creating “the modern education system in Quebec…[and] making it democratic, making it free for children to attend from grade school to college.”

After he left politics in 1969, Paul Gérin-Lajoie made his influence felt on the world stage. In 1970, Prime Minister Pierre Trudeau appointed him to head the Canadian International Development Agency. During his seven years at CIDA, he expanded Canada’s international assistance to former French colonies in Africa, and enlarged the agency’s role in responding to emergencies.

When he retired from CIDA, his staff gave him an unusual farewell gift: the charter for his own non-governmental organization. The result, the Paul Gérin-Lajoie Foundation, continues to be dedicated to providing training and education for young Africans. The foundation also created the iconic Dictée Paul-Gérin-Lajoie project, which has helped millions of students in Canada and abroad improve their mastery of the French language.

“Paul Gérin-Lajoie’s immense and historic contributions to public life and education – in Quebec and around the world – helped build a brighter future for so many young people, and our society is stronger for them,” said Prime Minister Justin Trudeau (BA94) upon Gérin-Lajoie’s passing.

During his lifetime, Gérin-Lajoie’s contributions earned him numerous honours, including the Queen Elizabeth II Golden Jubilee Medal and the UNESCO Albert Einstein Gold Medal, as well as appointments to the Ordre national du Québec, the Order of Canada and France’s Légion d’honneur. He received 12 honorary doctorates, including one from McGill in 1964.