They came, they sawed, they conquered. McGill’s Women’s 1 Woodsmen team took top spot at the 56th annual Macdonald College Woodsmen Competition, this past Saturday. The women’s team was anchored by Stephanie Bélanger-Naud, an agricultural economic student from Brigham, Quebec, who won an impressive four events. On the men’s side, McGill finished third overall.

An enthusiastic crowd cheered on the lumberjacks and jills over the course of the chilly day, with the Mac team garnering home-field advantage in the form of boisterous support from the sidelines.

All the cheering seemed to work, as McGill’s Women’s 1 team finished on top of the female division, a scant six points in front of the Fleming team. Stephanie Bélanger-Naud, led the way with wins in two individual, one doubles and two team events.

Perhaps Bélanger-Naud’s most impressive victory was in the snowshoe event where she posted the fastest time of all competitors (male and female) – a full 16 seconds faster than her closest competitor. Other winning events for Bélanger-Naud were the Single Buck, Underhand Chop (with sister Joséanne) and team events Swede Saw and Cross Cut with teammates Ketsia Croteau, Julie MacFarlane, Geneviève Guinos-Coté, Joséanne Bélanger-Naud and Eliane Wubbolts.

Also at the top of the score sheet were Ketsia Croteau and Eliane Wubbolts in the Quarter Split. McGill’s Women’s Team 2 finished fifth in an eight-team field. 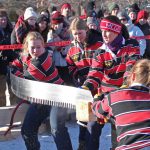 Mac women on the Crosscut Saw 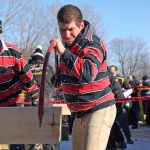 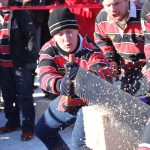 The sawdust was flying on Saturday 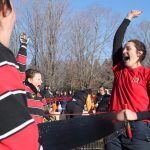 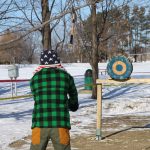 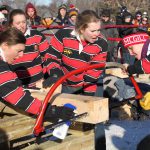 The Swede Saw is a team event 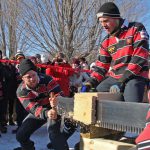 Two on the saw, one spraying lubricant 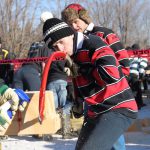 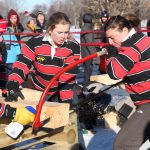 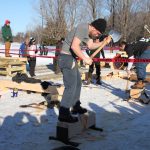 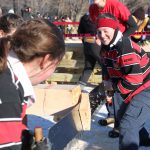 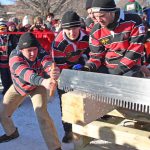 Poised for the start 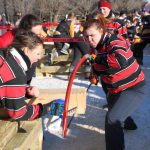 Bearing down in the Swede Saw ev ent 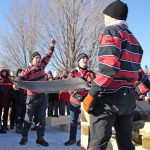 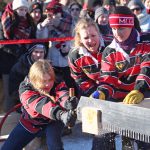 Putting everything into the Crosscut Saw event 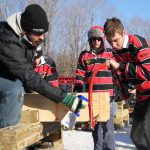 Making sure the Swede Saw glides as smoothly as possible 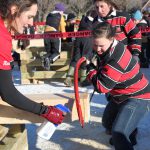