and the stuff we use to build them. 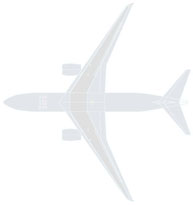 A good airplane needs to be strong enough to withstand enormous winds, light enough to stay airborne and non-flammable enough so it won’t, well, catch fire. But imagine a new generation of aerospace building materials that has all those qualities, and more. Maybe it’s able to conduct electricity, eliminating the need for kilometres of wiring. Maybe it can sense, and flag, damage to itself. It may even change the very shape of airplanes.

Mechanical engineering associate professor Pascal Hubert, a member of the Structures and Composite Materials Laboratories (SCML), is helping develop the composite materials that will lay the groundwork for Aviation 2.0. Composites are made from a resin (such as a polymer) reinforced with a fibre (such as carbon fibre). Unlike, say, steel, in which iron and carbon are blended into a homogeneous whole, the composite constituents can be engineered to achieve properties tailored for a particular application. Airframe designers can optimize their design, eliminating redundant weight and thus increase fuel economy, flight range and payload capacity. Composites also have the advantage of saving manufacturing time and cost (and the added weight of fasteners) by integrating smaller pieces into one big, no-assembly-required whole.

Hubert now holds the Canada Research Chair in Advanced Composite Materials, but he didn’t start working in the field until the late ‘80s recession forced him out of aerospace research. “My first job in composites was working on something very Québécois,” he remembers, “snowmobile tracks!” As Hubert quickly learned, the composite material manufacturing of the day was a haphazard, labour-intensive process. It was a short detour into the engineered wood product industry that opened his eyes. “It showed me the direction we need to go with composite materials: we need more automation and a better understanding of the processing of composites,” he recalls. “Now we’re helping companies develop a more scientific approach to processing. Before, it was trial and error.”

One of the SCML’s current aerospace projects, led by Larry Lessard, associate professor in the Department of Mechanical Engineering, brings together industrial and academic brainpower: Bell Helicopter Canada, Delastek Inc., École polytechnique de Montréal, the National Research Council Aerospace Manufacturing Technology Centre and the Consortium de recherche et d’innovation en aérospatiale au Québec (CRIAQ). The project’s objective is to design a carbon fibre epoxy helicopter horizontal stabilizer slat that can be manufactured using the resin transfer moulding (RTM) process. Such slats are traditionally assembled from several aluminum parts; the one-piece RTM slat promises to reduce labour time and cost, and be a stronger final product. “A lot of our research involves understanding the composite manufacturing process,” Hubert says, “and the effect of manufacturing on the final performance of the material.”

At the same time as Hubert and his SCML colleagues are fine-tuning the composite manufacturing process, they’re also planning the future. Mitsubishi and Honda are already making all-composite business jets, but the big news is the forthcoming Boeing 787. Dubbed the “Dreamliner,” the mid-sized wide-body will be the first major civil aircraft to have fully composite fuselage and wings when it goes into service in 2009. The plane will be almost 60 per cent, by weight, composite materials (an Airbus 320, by comparison, is approximately 20 per cent composite), making for a lighter plane that will consume upwards of 20 per cent less fuel.

“We have to think about developing the next generation,” says Hubert. “The buzzword these days is multifunctional. When we talk about a structure, it’s something to support loads or forces coming from the environment—with airplanes, it’s lift, it’s drag, it’s the weight of the airplane. So the structure transfers loads from one place to the other, and that’s all. But multi-functional structure does something else at the same time. For example, there’s the airplane structure itself, but there’s also kilometres of electrical wires. What if you could make a structure that had electrical connectivity? Or a structure that could also sense damage and indicate what needs repair? A lot of development is about materials that have these other functions.”

There may even be morphing technology that changes the shape of the wings based on flight configuration. “We’re at the point where we need to rethink the way we design aircraft structure. When you think about it, aircraft structure hasn’t evolved much over the years; it’s the same idea about a fuselage, wings… when we introduce new composite materials, we often don’t benefit from their properties because it’s expensive to change designs. We’re building the same structures, just replacing the materials. What we’re trying to do is develop better analytical tools to help us design with these new materials. And also develop optimization tools to help us find the best configuration for weight and cost.”

Next: Keep Watching the Skies