Neurologists, biologists, biomedical engineers and pharmacologists are banding together to answer a tough question: How can we repair damaged body parts? 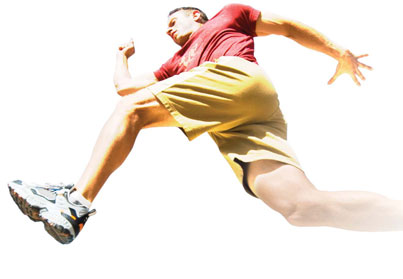 A car headed home through the mountains on a cold winter evening slides across a patch of black ice and careens into the ditch. The impact fractures one of the driver’s vertebrae and sends bone shards into his spinal cord, causing partial paralysis. Elsewhere, a 60-year-old woman misjudges the height of a curb and tumbles to the ground, fracturing her hip so badly that it needs to be replaced.

Damage to the skeletal and nervous systems from trauma or disease can be swift and have terrible physical and psychological effects. Whether young or old, these patients face surgeries, medications and hours of physiotherapy. In many cases the injuries will heal over time, leaving only scars and memories. But others may struggle to fully regain their body function.

The adult body has a limited capacity to repair itself. (Children’s bones and nerves, on the other hand, tend to have more plasticity, until around age 18.) Many adult tissues cope poorly with traumatic injury. The nervous system is particularly vulnerable because it is unable to remake the connections controlling body functions. But researchers at McGill University are searching for one of medicine’s holy grails: the repair and regeneration of tissues, neurons and body functions disrupted by traumatic injury. In the process, they’re breaking down the barriers that have traditionally separated their disciplines and making their own connections.

The Adult Trauma Centre at the McGill University Health Centre treats more than 9,000 trauma patients annually; most are victims of car accidents and falls. “When you have a contusion to the spinal cord you get a big cavity. The problem would be something akin to opening up your computer and smashing the motherboard with a hammer,” says Sal Carbonetto, director of McGill’s Centre for Research in Neuroscience. “In the recent past and the immediate future, the approach is ‘Let’s try this and see if it will spontaneously reassemble.’ The current approach is to take neural stem cells and inject them and see if these circuits are going to reassemble. There are some encouraging results in animals, but these are very fine circuits and very detailed in their connections, and asking them to reassemble even with the help of stem cells is asking a lot.”

Some nerves can regenerate spontaneously, but very few—if any—will be able to grow for large distances and reform previous connections around a big wound. The cues and guidance molecules that were there during development are often no longer present in the adult nervous system, says Carbonetto. But a damaged nerve may spontaneously sprout and grow toward undamaged adjacent regions of the brain or spinal cord, rather than attempting to cross the wounded area. This regeneration can let undamaged neurons compensate for the damaged ones. “Unfortunately,” explains Carbonetto, “this process is highly variable. We describe it as ‘spontaneous’ because we are ignorant of the factors that control it.”

Understanding the regeneration of damaged nerves—and eventually controlling where and when it occurs—could have a large impact on the kind of recovery trauma patients achieve. Walking may be the ultimate goal, but for many patients, regaining bladder function or abolishing neuropathic pain is an immediate priority. To this end, Carbonetto leads a team funded by the Canadian Institutes of Health Research’s Regenerative Medicine and Nanomedicine Initiative that is identifying the genes responsible for regenerating the nerve’s long, branch-like body. Their work begins in organisms like Caenorhabditis elegans and Drosophila melanogaster—tiny worms and fruit flies that are hugely valuable to genetics research. Once a gene has been identified in a fruit fly or worm, scientists can search a database to find its vertebrate homologue, and then test it and manipulate it in a mouse or other animal. “Once we have used genetics to identify genes that control nerve regeneration,” says Carbonetto, “we can develop animal models to find drugs that will mimic the genes in the pathway, or up-regulate their expression.”

Carbonetto’s CIHR project involves McGill researchers from a wide array of disciplines—from neurology and biology to biomedical engineering and pharmacology—as well as researchers from Université de Montréal and other institutions. These types of networks are breaking apart the research silos often seen in science and promoting new transdisciplinary collaborations with an interest in regenerative and repair medicine.

With degrees in electrical engineering and neuroscience, Kathleen Cullen, professor in the Aerospace Medical Research Unit of the Department of Physiology, is uniquely positioned to study and manipulate the neuronal circuits that process sensory information to produce accurate motor control. Her research focuses on the sensorimotor transformations that keep us upright, balanced and moving during our everyday activities, and control the information exchanged between the inner ear and eyes, pressure points on the hands and feet, and the motor system.

Cullen is tracking and dissecting how the information encoded by our sensory systems—visual, vestibular (movement and balance) and proprioceptive (sensory perception within the body)—is converted into motor commands to the eyes, head and other body segments. “We’re interested in knowing how a sensory input is turned into the ‘normal’ output of an action or motion,” she says. In addition, Cullen’s CIHR- and NIH-funded research programs have provided insight into why the adult brain cannot fully adapt to loss of sensory input. The work, which involves researchers from the Departments of Physics, Electrical and Computer Engineering and Computer Science, as well as collaborators at Johns Hopkins University and the Centre national de la recherche scientifique in Paris, is leading to the development of neuroprosthetics—artificial devices that can help an impaired nervous system function.

“One of the big hurdles to getting these to work has been optimizing the interface between the electrode and the brain,” says Cullen. When a foreign material is inserted into the brain, glial cells—one of the two main types of cells in the nervous system (neurons being the other)—launch an immune reaction. They interfere with the implanted electrode by forming a glial scar that encapsulates and isolates the electrodes.

By linking their research, Cullen and Carbonetto are working toward developing interventions that fool the glial cells into accepting the electrode. One approach is to coat the electrodes with a biomaterial that will improve the longevity of their connections with the adjacent neurons.

Carbonetto and Cullen each occupy a node in a network of McGill researchers who seek to minimize the long-term disability arising from traumatic injuries. Janet Henderson, Associate Dean of Research of the Faculty of Medicine and director of orthopedics research, forms another. Henderson’s research interests lie in orthopedic trauma and the biomaterials that can be used to repair damaged bone. According to Henderson, there is plenty of room for improvement. Today’s gold standard for replacing missing bone is to remove a piece of live bone—from the hip or skull, for example—and place it in the defect. Larger defects require implanting replacement “parts” from an unrelated donor, a process fraught with drawbacks. The grafts must be devitalized to prevent rejection, which reduces the capacity to induce new bone formation. Grafts can also carry unidentified pathogens. Then there’s the simple fact that the larger the defect, the larger the replacement—and large replacements are hard to find. “The bottom line is that it doesn’t work very well,” says Henderson.

Henderson and her colleagues have spent years sorting out the genetics of bone development. “Now, the biggest need is to look at bone regeneration and repair because there are a lot of baby boomers who are going to be breaking a lot of bones and we have no good mechanism to repair them.” They’ve studied mouse models of bone diseases, including osteoporosis (fragile bones) and osteomalacia (soft bones), and have developed a hip implant that mimics the hip replacement surgery done frequently in older people. Over the course of her research she has taken stem cells and seeded them onto the surface of the implant to promote healthy bone growth, and looked at the molecular mechanisms behind the success of one material over another. For years there was little interaction between the basic researchers and orthopedics, says Henderson, but the two groups are now coming together.

These collaborations mean that Henderson’s research overlaps with that of someone like Rosaire Mongrain, an associate professor in the Department of Mechanical Engineering, and an expert in the development of devices, including stents, which can be used to promote new vasculature and encourage the growth of new bone. Or she might collaborate with Vassilios Papadopoulos, the Director of the Research Institute at the MUHC, whose research interests lie in steroid hormone biochemistry and drug development, both of which are key drivers of bone and neural regeneration and repair. “Something he discovers that works for the brain might work very well for bone too, because they have similar growth factor requirements,” says Henderson.

There’s a strong foundation at McGill in neuroscience, bone research and orthopedics, which lends a hand in recruiting new minds and retaining trainees. From 1989 to 1998, McGill University was the hub for the NeuroScience Network, one of the Networks of Centres of Excellence funded by the federal government. “The group has been around for a long time and it’s spawned some of the top neuroscientists in Canada and Quebec,” says Carbonetto, who adds that the links and collaborations are still very active. Cullen adds that the sturdy base means that it’s easy to bring the best and most innovative scientists to McGill.

Henderson and Carbonetto say that by forging these new relationships they’re promoting “rapid knowledge translation”—the flow of information from researcher to practitioner, and vice versa. “We view ourselves as the basic science complement to the issue of neuro trauma,” says Carbonetto.

“Surgeons, engineers and basic scientists are working together,” says Henderson. “That’s the strength.”

Next: The Diabetes Code