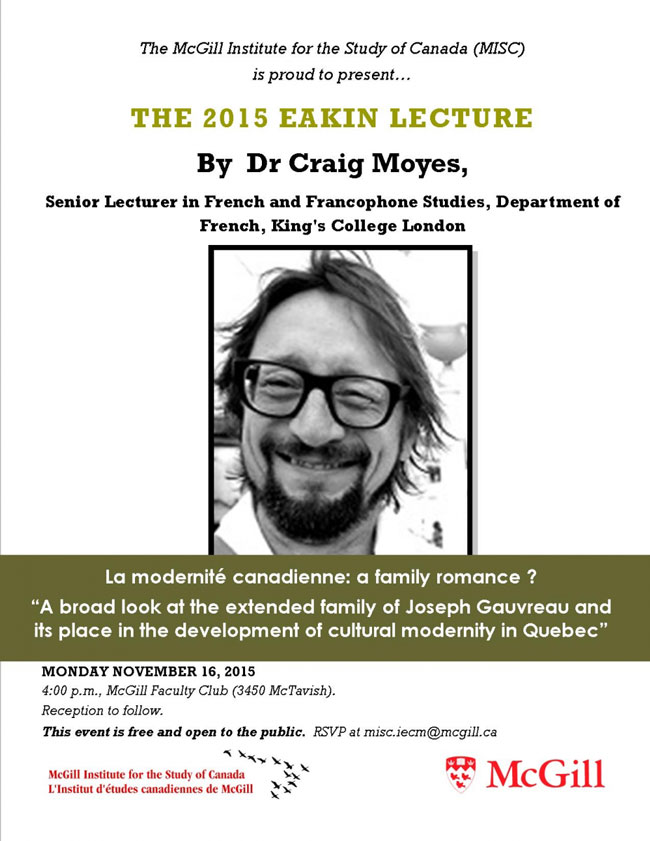 On Monday, Nov. 16, Visiting Eakin Fellow Dr. Craig Moyes (Senior Lecturer in French and Francophone Studies, King’s College London), will deliver the 2015 Eakin Lecture, Modern Quebec Literature. Created with the generous support of the Eakin Family in memory of William R. Eakin, The Eakin Visiting Fellowship is awarded for periods of one or two academic semesters to an active scholar focusing on studies related to Canada. The Reporter spoke to Dr. Moyes, in advance of the lecture.

Who was Joseph Gauvreau and what was it about him that first caught your interest?

Joseph Gauvreau (1870-1942) was a well-known figure in Quebec during the early part of the 20th century. He was a doctor, public health campaigner and pamphleteer, writing tracts on diverse issues such as tuberculosis, alcohol abuse (he was a fervent temperance campaigner), breast feeding and especially the history and defence of French language rights. After losing his arm in a car accident, he effectively stopped practicing medicine and devoted most of his energies to this latter cause.

It wasn’t the man himself who first caught my interest, however; it was his children. I discovered him (and his remarkable family) through researching one of his daughters, Marcelle Gauvreau. She was one of the rare female scientists in 1930s Quebec and assistant to the other subject of my research, le frère Marie-Victorin — one of the great botanists of the 20th century, author of the monumental Flore laurentienne and founder of the Montreal Botanical Gardens. From there, I learned that the Gauvreau family—through direct filiation, marriage (notably to the Jutras family), or association — found itself involved in some of the major moments of cultural transition towards what has come to be known as “modernity” in Quebec.

You are the MISC’s 2015 Visiting Eakin Fellow, from King’s College London. What has your Eakin experience at McGill been like?

Although I have been teaching in the UK at King’s College London since 1999, I grew up in Vancouver and studied for my PhD. at the Université de Montréal in the early ‘90s. When I was here, I took advantage of this province’s brilliant CREPUQ agreement to take courses at McGill and at l’UQÀM. So being invited as an Eakin Fellow was a bit like coming home. The generosity of the endowment has allowed me to pursue my work in the archives, to rediscover Montreal’s wonderful bibliophilic culture (from the McLennan library to the Word bookshop; from le Port de Tête to the amazing new BAnQ) as well as to meet and converse with friends and colleagues both old and new.

Your Eakin Lecture is titled, “La modernité canadienne: A Family Romance? A broad look at the extended family of Joseph Gauvreau and its place in the development of cultural modernity in Québec.” Can you give readers a little preview of what you’ll be discussing?

My talk, more expository than analytic, will raise the question of modernity in (French) Canada by evoking a number of characters and chapters in the Gauvreau “family romance”, which—without giving too much away—include the crisis and defence of Catholicism in the ‘30s, le Refus global of the 40s, and the cinema of the Quiet Revolution.

Why is the Gauvreau family still relevant to the 21st century Québecois generations?

Are the Gauvreaus still relevant today? Well, insofar as we all live in a Quebec that this remarkable family helped to build, defend and interpret, yes.