Our ability to swallow is something that many take for granted. From the moment we are born, any individual swallows approximately 600 times per day without giving it a second thought. You could imagine that if something were to repeatedly go wrong during those 600 swallows, trouble can add up quickly.

“Swallowing disorders are found in 55 per cent of stroke patients and 45 per cent of people suffering from dementia,” says Charlotte Guillet, a second-year master’s student in Speech-Language Pathology (SLP) at McGill’s School of Communication Sciences and Disorders (SCSD). “It’s estimated that one-third of people over the age of 80 have some sort of dysphagia, so we’re talking about a large scale problem that people often don’t think about and often dismiss as simply being a consequence of aging.”

Swallowing disorders, however, are no laughing matter. Certainly not when they can result in things like aspiration pneumonia, a potentially fatal disease. Swallowing disorders can also be the cause of malnutrition and even psychological issues that could lead to depression and social anxiety. As a result of the public’s general lack of awareness on this subject, Guillet, along with classmates Rebecca Dorner, Yan Jun Chen and Tracy Schaan have collaborated with the Speech-Language Pathology department at the Jewish General Hospital to develop their first-ever Swallowing Awareness Event, which will be held from 10 a.m. – 2 p.m. on April 14, at the Jewish General Hospital (JGH).

“You can get some really devastating effects from something that seems so basic and that people just don’t know about,” says Guillet. “People don’t realize, ‘oh I’m choking on water and that’s why I’m not drinking as much. And now I’m dehydrating and I’m in the hospital for all sorts of medical complications that if I had just approached someone and said hey I’m having trouble – I cough when I drink water they could have given me help and I wouldn’t be in this situation.’ So when I think of dysphagia I think about how it can have such a global and menacing impact on an individual and it’s something that can be quite simple to address.”

Living with a swallowing disorder

Managing a swallowing disorder is often not about trying to fix the problem, but rather more about managing it, notes Dorner. “There are certain things you can do to help your swallow,” she says. “For example, if you’re having trouble swallowing thin liquids you can increase the consistency of them, to make a thicker liquid, or puree food if its thickness is causing problems. There are also certain techniques you can try that someone like an SLP can teach you such as swallowing with more effort or swallowing twice. There are a variety of techniques so it depends on what kind of issues you are having.” Schaan explains that to provide the best care for patients, swallowing problems are typically assessed and managed by an interprofessional team that includes not only SLPs, but also occupational therapists, dietitians, nurses and physicians.

The students have been working on developing the event throughout their semester, hoping to draw the public’s attention to this oft-ignored issue. “The day will really be about education,” says Schaan. “We will have screenings, an information booth and even some interactive games.” 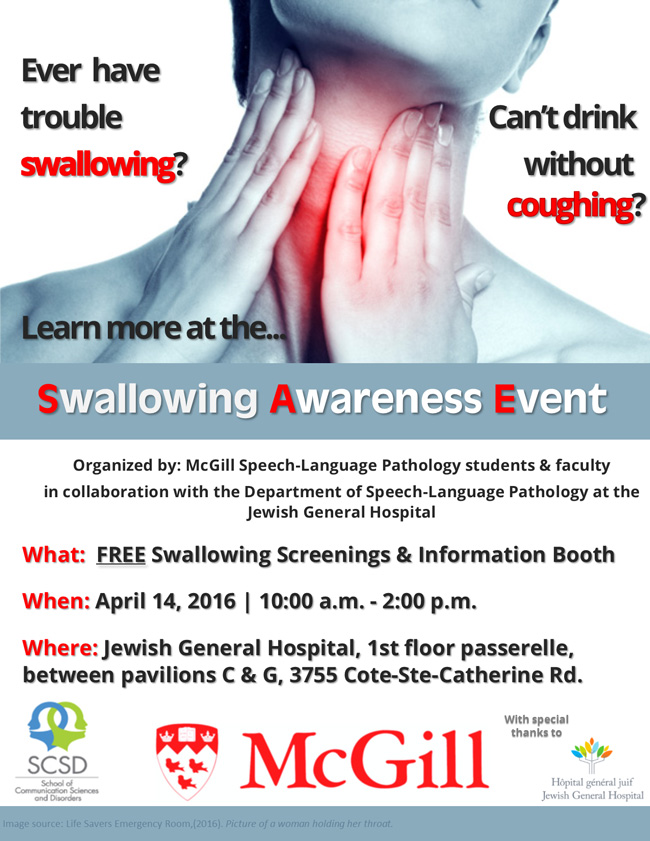 The students hope to reach patients, particularly those are more prone to swallowing disorders, such as those who have suffered strokes or who are afflicted with dementia or Parkinson’s disease, as well as people who have had structural changes, for example, as the result of surgery or radiotherapy to deal with head or neck cancer. They also hope to educate those that may not have any of the aforementioned characteristics, since you can be in relatively good health and still suffer from swallowing problems. “We are also hoping to reach caregivers,” says Schaan, “so that they are aware of certain signs of swallowing problems that they should be looking for.”

Working with Dr. Nicole Li-Jessen at the SCSD and Gina Mills, Interim Chief of Audiology and Speech Pathology Services at the JGH, the students, who expressed a variety of reasons for getting involved in this initiative have felt very well supported and are especially thankful for the JGH’s hospitality and for the generous budget provided by the SCSD.

“I have a special interest in brain injury rehabilitation, whether it’s neurological or because of trauma,” explains Chen. “Dysphagia is one of the most common signs and symptoms you see after a traumatic brain injury. I also I feel like it’s a great way to give back to the community and share our knowledge and share what we’ve learned.”

Dorner says that prior to completing a practicum in dysphagia she was unware of the impact it could have on people. “Once I started learning more about it, I even realized problems among my own family members. For example, my grandmother would always cough after drinking, and had I been able to recognize that symptom I could have helped her. So spreading awareness of these problems can help make a difference in people’s lives, because you want to make sure that your parents and grandparents are getting the nutrition they need to live a healthy life.”

“Since we’ve been doing a lot of learning in the area of dysphagia, I have a lot more empathy for people who have to deal with this on a daily basis,” says Schaan. “We often take it for granted that we can eat and drink what we want and not have any problems and not have to worry about things going down into our airways. So I think it’s important that people are educated and I feel privileged to be able to be among those to do that.”

I have oculopharyngeal muscular dystrophy, and now at 66 years of age, find it quite challenging to deal with dysphagia. I have been living in Vancouver for years, but my two sisters whom live in Quebec are also affected with the disease as are now my son and three of my sisters’ kids. I’m surprised you did not mention OPMD as many people are affected with this disease in Quebec. I’m trying to keep apprised of the ongoing research for muscular dystrophy, it is very slow but we keep hoping especially for the following generation.
Keep up the good work!

Diabetes drug found not to cause pancreatic cancer

Cat got your tongue? Free voice screenings on April...