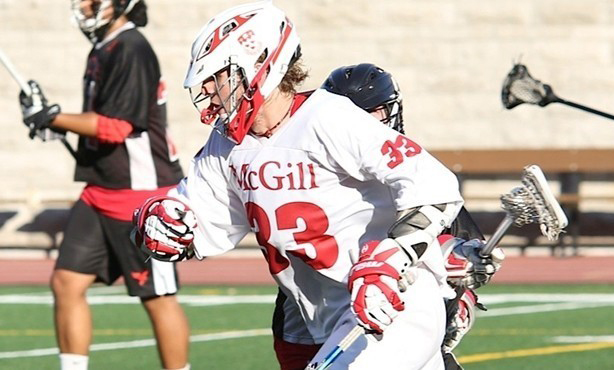 The Redmen, who were playing before an alumni Homecoming crowd, jumped into a 5-0 lead after the opening quarter, then went into cruise control, leading 10-2 at the half and 13-3 after three. The large early lead gave head coach Tim Murdoch an opportunity to spread the playing time around everyone who dressed. As a result, a whopping 11 different McGill players found the scoresheet, including Spencer Bromley, Brian Callahan and Rhys Burnell, each of whom potted a pair.

“This was a total team effort.” said Murdoch. “Once the game was in hand at halftime, we substituted our backups freely and played all 32 players.”

McGill starting goaltender William Waesche played the first half and was only beaten twice to collect the victory. He was relieved at halftime by James Spagnuolo, who played the final 40 minutes.

“Our goaltending was sensational.” noted Murdoch. “Waesche set the tone when he stuffed a point-blank shot on a breakaway in the first minute of play and Spagnuolo allowed just one goal in the second half.”

Replying for the Ravens was Chad Bean, Noah Hoselton and Steven Snowling, while beleagered goaltender Jonathan Batten was beaten for all 18 goals.

With four games remaining before post-season play, McGill’s magic number to clinch the CUFLA East Division pennant is two wins. The Redmen can wrap up their third consecutive eastern title as early as next weekend with wins over Concordia (0-5-0) and Ottawa (1-5-2), respectively, at Molson Stadium, Oct. 4-5.