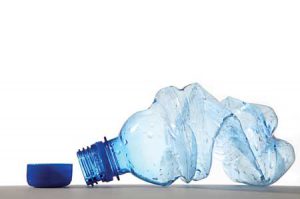 A few years back, I had a neighbour who took obvious pride in how “green” he was. He eschewed the family car most days for public transit, he fertilized his garden with fresh humus from his large backyard composter and he recycled admirably. But therein lay the great irony as every week his blue bin was crammed with water bottles, mostly those little 500-ml versions popular with gym goers, which he was. Since his gym hadn’t yet been equipped with recycling stations, he dutifully carted his spent bottles back home. Five times a week, just about every week of the year. On top of that, there was always a collection of the larger, one-litre models that he chilled in his fridge and carried in his backpack wherever he went.

People like my well-meaning neighbour seem to forget that the Three Rs of waste management – reduce, re-use and recycle – is a hierarchy of options, in which we’re supposed to strive to reduce first, re-use second and, finally, recycle. Sadly, many people have actually inverted the hierarchy, justifying their over-consumption by proudly pointing to their overflowing blue bin as proof of their environmentalism. “I recycle,” they say. “Big time.”

But the “one-and-done” reality of bottled water should be an affront to anyone who takes sustainability issues seriously. It is estimated that the U.S. – despite boasting one of the world’s safest and most accessible public water sources – produces and discards some 50 billion plastic water bottles every year with only 23 per cent actually making it to recycling plants. The rest become landfill. And those bottles, primarily made from polyethylene terephthalate (PET) plastic, will take upwards of 1,000 years to disintegrate, leeching potentially harmful substances back into the earth along the way.

And lest we Canadians get too smug, Agriculture and Agri-Food Canada reports that annual grocery sales of bottled water, apart from those for the big 18 litre water dispensers, grew 65 per cent between 2003 and 2006, from a value of $264 million in 2004 to just under $437 million. This figure does not include sales from non-chain convenience stores, drug stores, vending machines, food service and other large format outlets.

The same government agency reported that, as of 2006, some three in 10 Canadian households used bottled water as their main source of drinking water in the home.

Today there are more than 100 different brands of bottled water available in Canada, of which more than eight per cent are imported. This begs the question: Do Canadians, with the world’s largest supply of fresh water just a turn of the tap away, really need to drink $437 million worth of bottled water annually – let alone have it shipped in from distant places like Fiji?

And the landfill issue is just the tip of the tainted iceberg. Despite its carefully crafted image of mountain spring freshness, the bottled-water industry is less than pristine, using far more water in production than it actually bottles, not to mention the fossil fuels burned during the manufacturing, packaging and subsequent transportation of the final product.

There are also anecdotal reports of an increase in cavities in populations that drink lots of bottled water as their kids don’t get enough of the fluoridated kind so readily available in many municipalities. And, of course, there is the debate over the ethics of water as a saleable commodity being a part of a broader trend toward the privatization of water distribution systems. We thoughtlessly consume this “luxury water” while more than one billion people in the developing world don’t have access to safe drinking water, including, ironically enough, more than half the people in Fiji.

Isn’t that hard to swallow?

Neale McDevitt is the editor of the McGill Reporter.