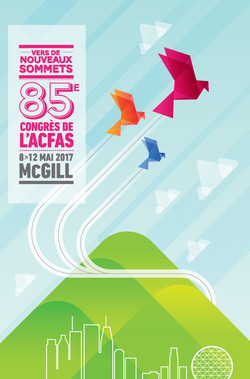 The 85th Congrès annuel de l’Association francophone pour le savoir (Acfas) may be five months away, but McGill is already busy getting ready to host what is the largest French-language interdisciplinary conference in the world.

Beginning December 1, professors Céline Le Bourdais and Michel Tremblay, co-presidents of the scientific committee, and colleagues will start evaluating the stacks of colloquia submissions that they’ve received. (Colloquia submissions are closed, but grad and postdoc students still have until November 28 to pitch their proposals for “communications libres” – that is, oral presentations or poster sessions.)

Interest was strong, says Allison Flynn, McGill’s Congress Director, so next May’s event promises to be packed. “It’s going to be big,” she says. “Last year’s congress at UQAM had well over 200 colloquia, and the trend is holding up.”

The 2017 Acfas congress will run from May 8 to 12. The theme is “Vers de nouveaux sommets,” and the event will highlight cutting-edge research in all disciplines while also celebrating a rich legacy of past discoveries. With an estimated 6,000 delegates from some 40 countries expected to flock to McGill’s downtown campus, event planning is already well underway.

“We’ll need about a hundred rooms on campus for the week,” says Flynn. “We’re trying to center activities as much as we can around lower campus, so we’re working closely with class scheduling to find enough rooms. McGill Graphic Design is working on signage and wayfinding materials, which will be important because events will likely be spread out across 15 to 20 buildings.”

“The logistics committee has been hard at work doing everything from forging partnerships with hotels and Tourisme Montréal to getting in touch with caterers and furniture rental companies,” she adds. “We’re coordinating audio-visual and computer equipment, and NCS [Network and Communications Services] is working alongside electricians to install the necessary plugs and hardware. We’ll need registration areas. The university presses will be setting up kiosks. We’re expecting something like 60 journalists, so we’ll need media rooms, we’ll need a press gallery. Radio-Canada will be setting up a studio for the week to do research-related programming. It’s a big endeavour.”

In addition to the colloquia, the Acfas congress will feature a week of free, research-focused events that will be open to the public. Pascal Brissette, president of the Comité des activités grand public, and committee member Stéphan Gervais (both from McGill’s CRIEM) are currently putting the finishing touches on event proposals. The McGill Reporter will publish a full schedule of Acfas events when details are finalized.